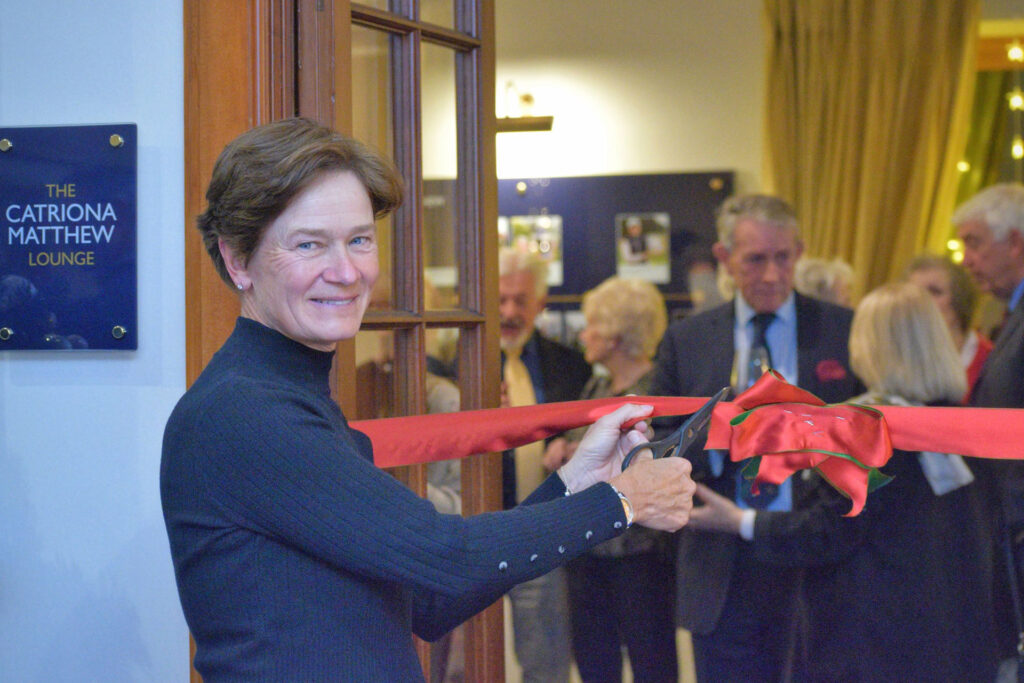 Local hero and lifetime member, Catriona Matthew reopens a clubhouse lounge in her name at The North Berwick Golf Club

Matthew, who was bestowed a Lifetime Membership by the club in 2019, guided the European team to an historic second successive Solheim Cup victory at Inverness Golf Club in Ohio back in September, becoming only the third captain to achieve the feat and the first European to do the double.

“We are extremely proud of Catriona’s incredible achievements as one of Scotland’s most successful golfers and the Club wanted to do something special to honour that success, particularly after the recent Solheim Cup victory which we witnessed in Ohio.

“The North Berwick Golf Club has an iconic clubhouse overlooking one of the most famous links in the world and naming the lounge which overlooks the 18th green after our very own North Berwick icon is a very fitting way to mark Catriona’s achievements.”

A long association with the club

A member of the East Lothian club since the age of 12, Catriona grew up in the town and honed her skills on the Wee Course, where she would later work as a student in the summer collecting money from visitors. As an amateur, she won the Scottish Girls Match Play and Stroke Play Championships, before really making her mark on the national stage by clinching the Scottish Ladies Amateur Championship on three occasions, as well as winning the British Women’s Amateur title in 1993.

Affectionately known to her fellow professionals as ‘Beany’, she made the switch to the paid ranks a year later and claimed her maiden professional title at the 1996 Australian Women’s Open. Fast forward two years and she made her Solheim Cup debut at Muirfield Village in Ohio, an event she would go onto play in on no fewer than nine occasions, before taking the helm as captain on home soil in Gleneagles in 2019. Close friend and captain’s pick Suzanne Peterson famously holed the winning putt in the final match on the final green as the Europeans celebrated an incredible victory, with ‘Beany’ hoisting aloft the trophy in the sunshine of the Perthshire hills.

Role model to the next generation

The highlight of her individual playing career has undoubtedly been the Women’s British Open triumph at Royal Lytham in 2009, made all the more remarkable by having given birth to second daughter Sophie just 11 weeks prior as ‘Super Mum’ became Scotland’s latest sporting superhero. Years of practice on the West Links at North Berwick was key to success on the famed Lancashire links that week.

Still competing on the LPGA Tour and Ladies European Tour, Matthew also finds the time to mentor the next generation of young Scots hoping to follow in her footsteps and in her role with the Scottish Golf performance team, she supports another young North Berwick star in the making in talented teenager Grace Crawford, who earlier this year won the club’s Ladies Championship at just 14-years-old.

"It holds a very special place in my heart"

Speaking at the opening ceremony of her new Lounge, after cutting the ribbon on the doors, Matthew said:

“I am very honoured to receive this accolade from the Club and it will feel amazing to have the lounge named after me. As a local girl, I have spent so many hours playing and practicing on the West Links, and it holds a very special place in my heart. The course and the town itself are places that golfers all over the world have fallen in love with and it's nice to be synonymous with such a fantastic club.

“Hopefully I can continue to inspire more young girls in Scotland to take up golf and go on to enjoy the game for life, whether as a member of their own local club or to play on the national and international stage. The profile and stature of the women’s game is growing all the time and recognising the achievements of female golfers can only help encourage more women to get involved in our wonderful sport.”

Founded in 1832, the Club is the 13th oldest in the world and ranked in the Top 5 in Scotland. A former Open Qualifying venue, North Berwick will stage final qualifying for the AIG Women’s Open in 2022 as the event heads to Muirfield for the first time, where Catriona will compete as a former champion.