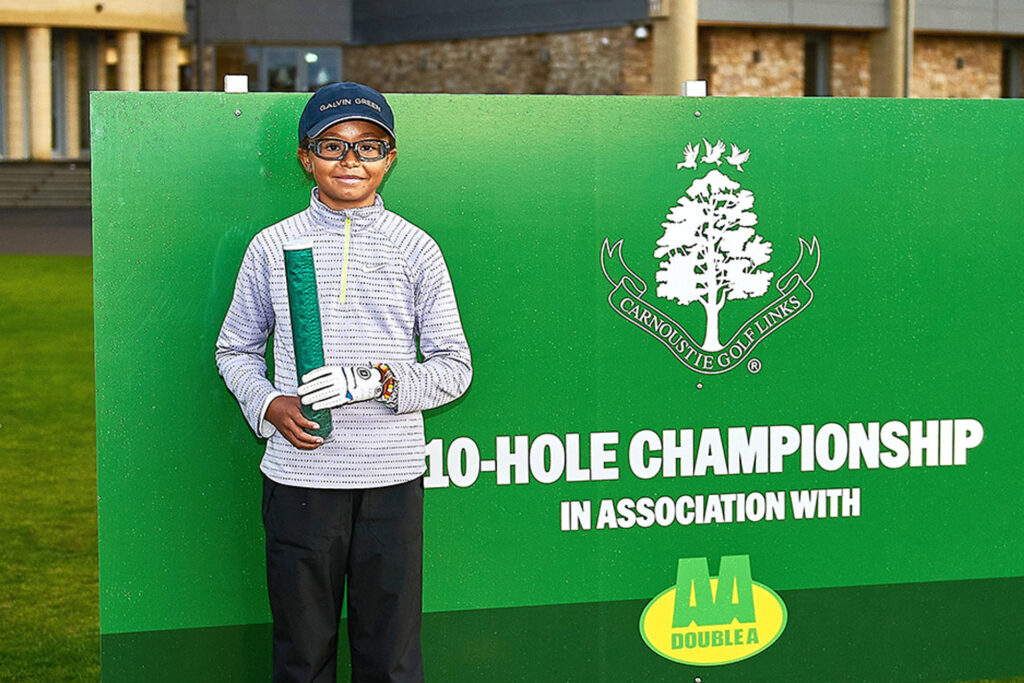 On Saturday, October 9, Carnoustie Golf Links hosted a first of its kind 10-Hole Championship on The Carnoustie Championship Course which was open to all their Season Ticket Holders with no restrictions on age, gender or handicap. It gave entrants the opportunity to play in a competitive format without feeling intimidated by the field and compete at their own level.

This brand-new 10-Hole event was the brainchild of the executive team at Carnoustie, with Keir McNicoll, Head PGA Professional in charge of the tournament. This year the tournament was being hosted in association with The Double A Trading Company who are Carnoustie Golf Links John Deere turf equipment partners providing a wide range of garden, estate and professional turf equipment.

The tournament saw players tee it up on a unique 9-hole routing of The Carnoustie Championship Course, with the top four ranking players going on to a 10th hole play-off on the infamous 18th hole to battle it out to become the very first winner of the Carnoustie Golf Links 10-Hole Championship and win a once in a lifetime prize of a round of golf with 1999 Open Champion Paul Lawrie.

The competition was fierce but in the end 10-year-old junior golfer Nina Fischer triumphed and became the very first winner of the Carnoustie Golf Links 10-Hole Championship in association with Double A Trading Company.

Fischer, a 12 handicapper from St Andrews and a member of St Regulus Ladies Golf Club, came through the 9-hole Stroke Play with a net 33 and a share for second place with Michael Law. David Martin who plays off one and is a member of Carnoustie finished as leading qualifier with a net 32. They were joined on the 10th hole play-off by Bruce Shepherd.

A unique routing for the tournament

The tournament was inspired by the course’s original architect, Allan Robertson, who laid out the first 10 holes in 1842 (although the first record of golf played on this links land dates all the way back to 1527). The unique routing of the course will see competitors play the 1st, 2nd, 6th, 7th, 14th, 15th, 16th, 17th and 18th holes, with the final 10th hole play-off taking place on the 18th hole.

Commenting on the tournament and Fischer winning the first title, McNicoll, said:

“This championship has been a real triumph here at Carnoustie, we have always been a venue that believes in making the game inclusive and growing and adapting it for the future – Nina’s win was a fantastic, inspirational, finish to a wonderful day of excellent golf. We believe that the game of golf, which has so many health and wellbeing benefits, should be open to everyone who wants to play and a championship like this is another step on that exciting journey.”

After watching some of the best golfers tackling the 18th hole at Carnoustie during the AIG Women's Open, it's not a hole for the faint-hearted. We are very impressed that a 10-year-old was able to hold their nerve against the grown-ups! Congratulations Nina! A golf star of the future.