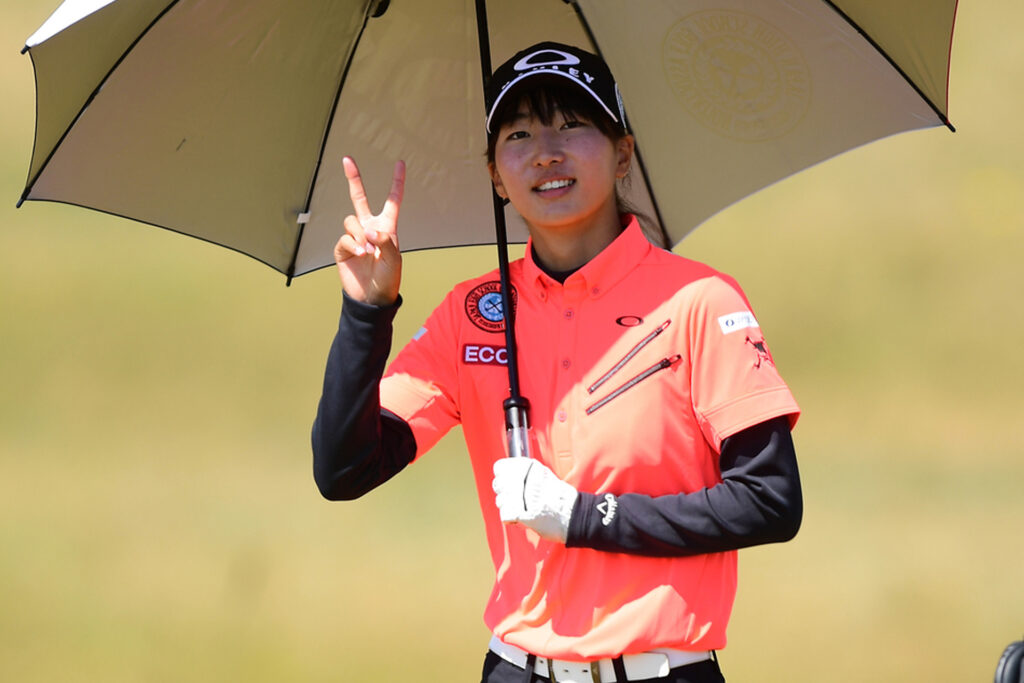 Ami Yamashita from Japan sparkled in the sun to finish as the leading stroke play qualifier ahead of a trio of Italian players at the 119th Women’s Amateur Championship.

On her first visit to the UK, 17-year-old Ami Yamashita incredibly eagled the 2nd and 3rd holes at Hunstanton – the latter with a holed approach – on her way to a seven-under-par round of 66 and a 36-hole total of eight-under to lead 64 qualifiers through to the match play stages.

“I wasn't really thinking about being top qualifier but I really enjoyed playing and I'm very happy. I’ve never managed two eagles like that. On the second hole, it was a par-5 and I got on in two and had a long putt that went in.

“On the third hole, the second shot went in the hole directly which was very lucky. But I enjoyed it. It’s my first time in the UK and I’m very proud. I enjoy match play.”

Yamashita, who qualified for the championship after winning The Royal Golf Club Junior event in her homeland, finished on the same mark as Italian Emilie Alba Paltrinieri but secured top spot on card countback.

The Royal Junior is held by Nippon Kabaya Oyaho Holdings, a sponsor of the Women’s Amateur Asia-Pacific Championship, and supported by The R&A.

In glorious scoring conditions on the Norfolk coast, Paltrinieri displayed the form that has seen her shine in R&A championships in recent years after she signed for back-to-back rounds of 69. The 20-year-old won the R&A Girls’ Amateur title in 2016 at Royal St David’s and lost in the semi-finals of the Women’s Amateur in 2020.

Another Italian, Alessandra Fanali, who lost in a three-way play-off to Morgane Metraux at the Ladies Italian Open on the Ladies’ European Tour earlier this month, again impressed to finish on seven-under after a 70 on day two, with fellow countrywoman Anna Zanusso fourth on six-under.

Curtis Cup player Hannah Darling comfortably qualified on five-under-par, helped by a blistering run of six birdies in her opening 11 holes, along with Carla Bernat of Spain. The Scot is bidding to win a third R&A championship after securing the R&A Girls’ Amateur title last year and the R&A Girls’ U16 Amateur honours in 2018.

“I did what I needed to do, made the qualifying cut, and that's all you need to do right now. There was a lot of good stuff in there and it's been a promising few days but there's a few things I need to go and work on for tomorrow and for the next few days. I’m happy enough with how it's gone.”

Lindblad easily through to the match play

Ingrid Lindblad, second on the World Amateur Golf Ranking, eased into the knock-out stages after successive 71s for a four-under-par total. German player Charlotte Back also progressed on four-under, the same mark as Esme Hamilton from England.

Those qualifying on three-under included Scotland’s Grace Crawford, winner of the R&A Girls’ U16s title at Enville in April, Harriet Lynch from England and Ireland’s Roisin Scanlon. Another Curtis Cup player, Annabell Fuller, was among those to progress on two-under and local player Amelia Williamson.

The qualifying mark for the top-64 players fell at three-over-par. Those missing out included defending champion Louise Duncan from Scotland, who dropped a costly shot on the last, Ireland’s Lauren Walsh and English player Caley McGinty.

A lot to play for

The R&A will provide live broadcast coverage of the quarter-finals and semi-finals of this week’s championship on Friday and the 36-hole Final on Saturday. This can be watched on The R&A’s website randa.org as well as its YouTube channel.