Amateur: Delight for Darling at the R&A Girls’ Amateur Championship 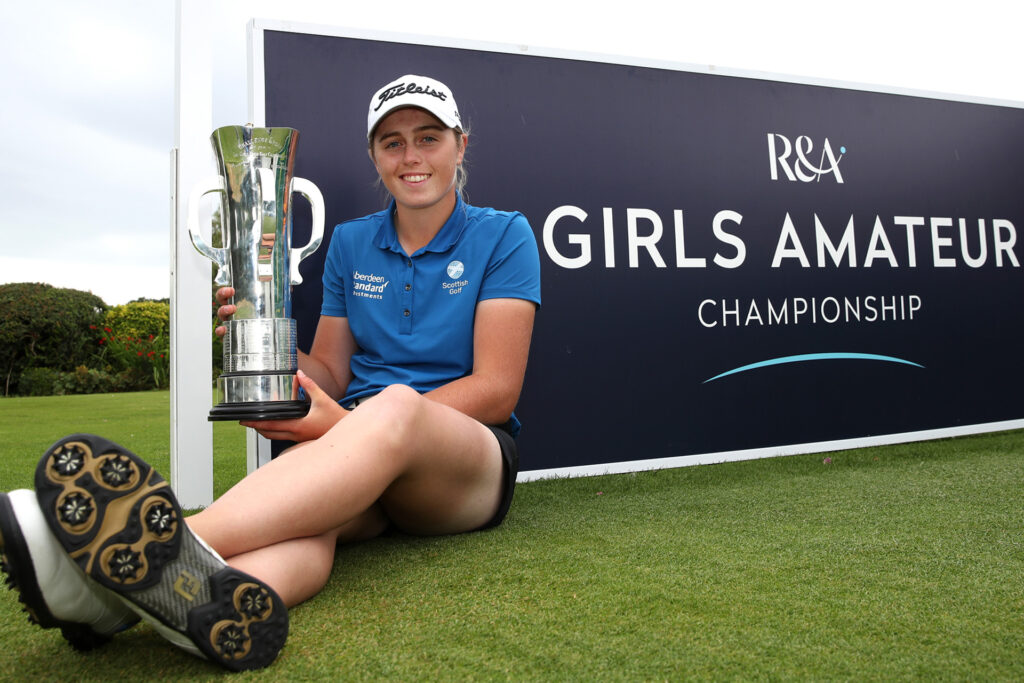 A summer to remember for Hannah Darling as she is crowned R&A Girls’ Amateur Champion after defeating Beth Coulter in the final at Fulford Golf Club.

Hannah Darling fought off a late comeback bid from Beth Coulter to continue her dream summer and win the R&A Girls’ Amateur Championship at Fulford.

The 18-year-old Scot began the week with selection to the Great Britain and Ireland team for this month’s Curtis Cup at Conwy and ended it in style by defeating Ireland’s Coulter by two holes.

Darling lived up to her status as the highest-ranked player in the field – currently 27th in the World Amateur Golf Ranking and continues a superb spell of golf this year.

This has come from a lot of hard work but also uncertainty due to the global pandemic, Darling commented on her form:

“Coming back from the Covid-19 lockdown, you’re almost unsure how it is going to go as I hadn’t played competitive golf for so long. But I put the hard work in with my coach Ian (Muir) and I knew my game was in a good place. All season I don’t think I’ve been outside the top three.”

After Darling won the inaugural R&A Girls’ U16 Amateur Championship at Fulford in 2018, closing with a 40-foot birdie putt to win after Coulter’s slip up on the 18th, the pair renewed their rivalry in high-quality, keenly contested final. On her win Darling said:

“It’s amazing to win at Fulford again, I honestly can’t believe it. I felt very nervous before I played today and I holed a really good putt on the 1st to settle me. I’ve putted well all week and knew I had to get off to a strong start.

“Against Beth, the story couldn’t be better. I really did think it might be her time today after three years ago but I’m obviously very grateful to win it. The names on the trophy are so good.”

The final of the R&A Girls' Amateur Championship

While conditions were overcast and breezy, the pair lit up the course after sharing six birdies in the first five holes to sit all square – with Darling single putting four of them.

In front of an appreciative crowd, Coulter’s bunker play kept her level before Darling made a birdie at the par-5 9th to edge ahead at the turn.

Darling then holed from eight feet for another birdie at the 12th following a superb approach, before Coulter conceded the long 13th after finding long rough to the right of the green and trail three down.

But the 17-year-old, winner of the Irish Girls’ Close Championship and runner-up in the Irish Women's Amateur Close Championship this year, hit back by winning the short 14th with a solid par and then holed superbly for a birdie from 20 feet at the 16th to reduce her arrears to one hole.

Kirkistown Castle’s Coulter passed up a good opportunity at the 17th to go all square, before Darling kept her cool to strike two impressive shots onto the par-5 18th. The Scot putted close for birdie, with Coulter unable to better it after finding the trees off the tee.

Reflecting upon the week and the final Coulter said:

“I actually said to Hannah in the locker room that those first six holes is probably the best golf I’ve ever played. We were all square and that shows how good Hannah is. I know we both made a bogey on the 17th, where I had a chance, but otherwise the quality of golf was really, really good.

“But if you had told me at the start of the week I would reach the final against Hannah I would’ve been happy. Obviously, I’m gutted now but I’ve had a good year and I’ll see what I can do in this championship next year.

“In the last couple of years, I’ve seen Hannah turn her game from good to great and I’d love to be able to do what she has done, push on and get to where she is.”

Darling, the first Scottish winner of the Girls’ Amateur since Clare Queen in 2001, joins a roll of honour that includes Suzann Pettersen, Anna Nordqvist, Georgia Hall and Pia Babnik.

“Augusta National is an incredible place with a lot of history and I just can’t wait to play there too.”

A number of this week’s players competed in the R&A Girls’ U16 Amateur at Fulford in 2018 and 2019, with the event introduced as part of the organisation’s drive to boost the girls’ game in Great Britain and Ireland and beyond, as well as provide a pathway to the elite amateur level.

Scoring, news and video can be found on The R&A’s website here.