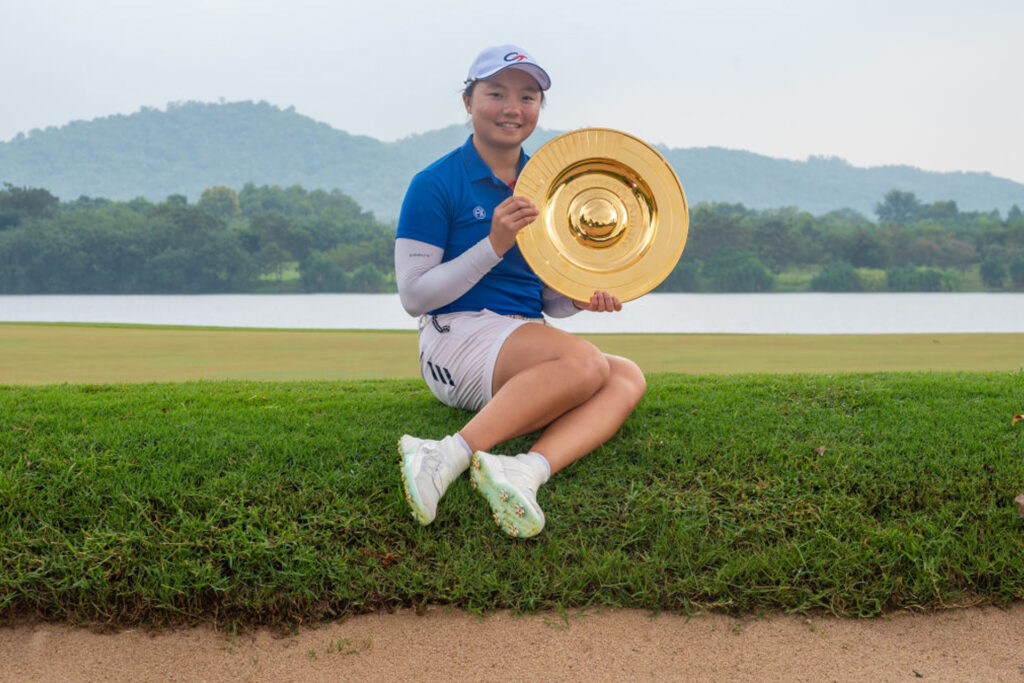 Ting-Hsuan Huang bounced back from a slow start to win the 2022 Women’s Amateur Asia Pacific (WAAP) championship and claim the first title for Chinese Taipei at Siam Country Club in Thailand.

Facing up to the challenge of the home favourite Natthakritta Vongtaveelap, the 17-year-old Ting-Hsuan Huang made six birdies over the last 11 holes to post a three-under-par 69 for a winning total of 11-under-par 277. That was two shots better than the Thai star, who closed with a one-under-par 71, which included bogies on the 16th and 17th holes.

Korea’s Hyosong Lee matched the best round of the day, a six-under-par 66, to climb up to tied third place at seven-under-par with Japan’s Yuna Araki (69) and Philippine’s Rianne Mikhaela Malixi (72).

Huang, who has notched up nine wins and 23 top ten finishes in the last two years, is committed to UCLA next year and has secured places in two major championships – the AIG Women’s Open and the Amundi Evian Championship – as well as the Hana Financial Group Championship and an invitation to play in the Augusta National Women's Amateur (ANWA).

“To be able to play in majors is really a dream come true for me. I’d like to thank The R&A and the APGC for giving us this opportunity,” said Huang.

“I did not have any expectations coming into this week. I just wanted to play good golf and enjoy myself on the golf course. To be able to do this is amazing.”

Huang, who is 83rd in the World Amateur Golf Ranking® (WAGR), started the day tied for the lead at eight-under-par but slipped way behind with bogeys on the 1st and 4th holes. Vongtaveelap, on the other hand, made a birdie on the second hole and then sensationally holed her second shot from 113 yards on the par-4 third hole to open a four-shot lead at the top.

Despite birdies on the eighth and ninth holes, Huang still trailed her Thai playing partners (Suvichaya Vinijchaitham being the third player in the lead group) when the group reached the par-3 12th hole. On the toughest hole on the course, playing 0.34 shots above par, Huang played perhaps the critical shot of the championship when she birdied from the bunker. Vongtaveelap made a bogey and Vinijchaitham slipped up with a double bogey.

Vongtaveelap’s biggest strength – her ability to hit the ball long, became the chink in her armour. She started the day playing conservatively on the par-5 holes, and then when she tried to go for the green on the par-4 15th hole, where the tee was brought forward to 280 yards, she sprayed her tee shot right and could only manage par. On the par-5 18th, trying to go for a big tee shot, she lost her balance slightly and ballooned the ball, leaving her to have to be content with a closing par.

The Thai WAGR number 38 had a golden chance to tie for the lead going to the final, par-5 hole but she pushed her four-foot par putt. Huang could only make a bogey after her tee shot left her in an awkward position in the fairway bunker, from where she had to lay up.

Huang, who grew up idolising Chinese Taipei legend and five-time major champion Yani Tseng, then hit a brilliant third shot in pouring rain to set up a final birdie from less than three feet. Vongtaveelap once again missed a birdie putt from four feet and failed to put some pressure on the champion.

“I felt very nervous because Sim put some pressure on me over the closing holes. I didn’t do very well on the front nine, but I was thinking very positively on the back nine,” said Huang.

“The shot on the 12th was a turning point, because I got very lucky there. My ball was in a footmark there. But on the 18th (third shot), I didn’t think too much. I just felt very confident on that shot.”

The 19-year-old Vongtaveelap, who was also second in last year’s championship in Abu Dhabi, was left disappointed with her finish and said, “I did my best today and my game was good. I think I lost the tournament because of myself and did not do well under pressure. I could feel that my swing was becoming very fast and aggressive.

“Huang is a tough competitor, and she is very good and I think I am going to learn a lot from this tournament,” said Vongtaveelap, who will be playing the Stage 2 LPGA Qualifier in Florida.

The 2021 Abu Dhabi champion Mizuki Hashimoto made one birdie and 17 pars in her one-under-par final round that tied her for the ninth place at five-under-par 283. Saki Baba, the highest-ranked player in the field at number three in the WAGR, who was struggling to make birdies, finally found her touch and made six in a bogey-free round that elevated her to tied sixth place at six-under-par 282.

The WAAP has been developed by The R&A and the Asia-Pacific Golf Confederation (APGC) to inspire future generations of women golfers and provides the champion with an unparalleled launchpad early in their career through exemptions into multiple women’s major championships and other elite amateur championships.

For more information on the Women’s Amateur Asia-Pacific, visit the championship website at www.randa.org/WAAP