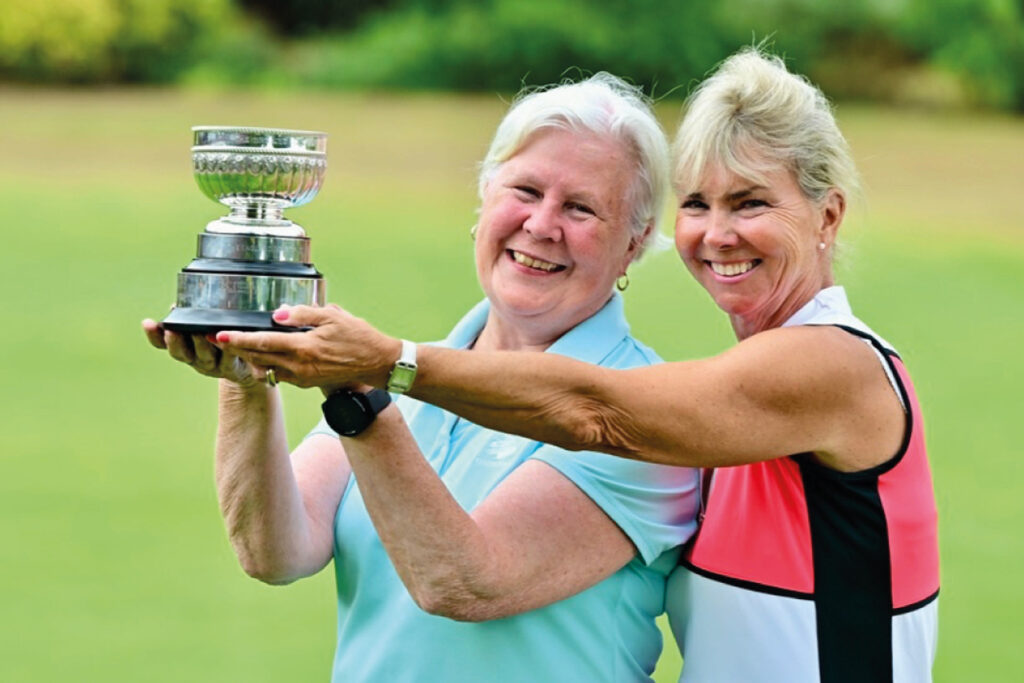 After the recent heatwave and drought, the weather broke just in time for the 2022 finals to take place at the excellent King’s Norton Golf Club near Birmingham.

With heavy rain affecting the later starters and causing a delay in play, it was tough going for the 28 teams that made it through to the much-anticipated finals day.

However, the course at King’s Norton – one of the country’s finest parkland venues stood up to the deluge.

The players battled gainfully through the conditions with the winning pair from Surrey delighted to take the victory in this four ball better ball competition with 45 Stableford points.

After the win, Florence said:

“We’re absolutely thrilled to have won this event – it was superbly organised and despite some slightly iffy weather it was a real delight to take part.

“We both came through our respective handicap section at our club qualifier and were put as a team for this final having not played together for five years. But something clicked on the day.”

“It was a day when we just worked well together and the highlight for me was making a four on a par five and earning the team five points!

“I’d just echo everything that Florence has said. It’s been a splendid day despite the rain, we enjoyed our game with two players from Lincolnshire and it’s great to have been a part of this event which does such great work for charity.”

The finals day was the culmination of a qualifying process which allowed winners from women’s Stableford competitions across 108 clubs in England to be eligible for the King’s Norton event. The leading 28 pairs were invited to play in the final.

The legendary Bridget Jackson MBE presented the cup, which she donated to the England Golf Trust, along with two crystal bowls. The latter is for the winners to keep in commemoration of their win while the winning pair also received a golf bag each donated by PING who also provided other prizes on the day.

“I’d like to thank all the players and clubs who have taken part in this year’s competition as their support will make a real different to the lives of young people, and to help spread the word of the work of the England Golf Trust”.

The England Golf Trust (EGT) is an independent charity that provides grants, bursaries and equipment from PING to young golfers of all ages and abilities who need financial support to develop and enjoy the game.

The Trust receives no public funded money but, thanks to a network of generous individuals and organisations, has supported 170 young golfers with more than £123,000 of funding.

Find out how to get involved visit englandgolftust.org