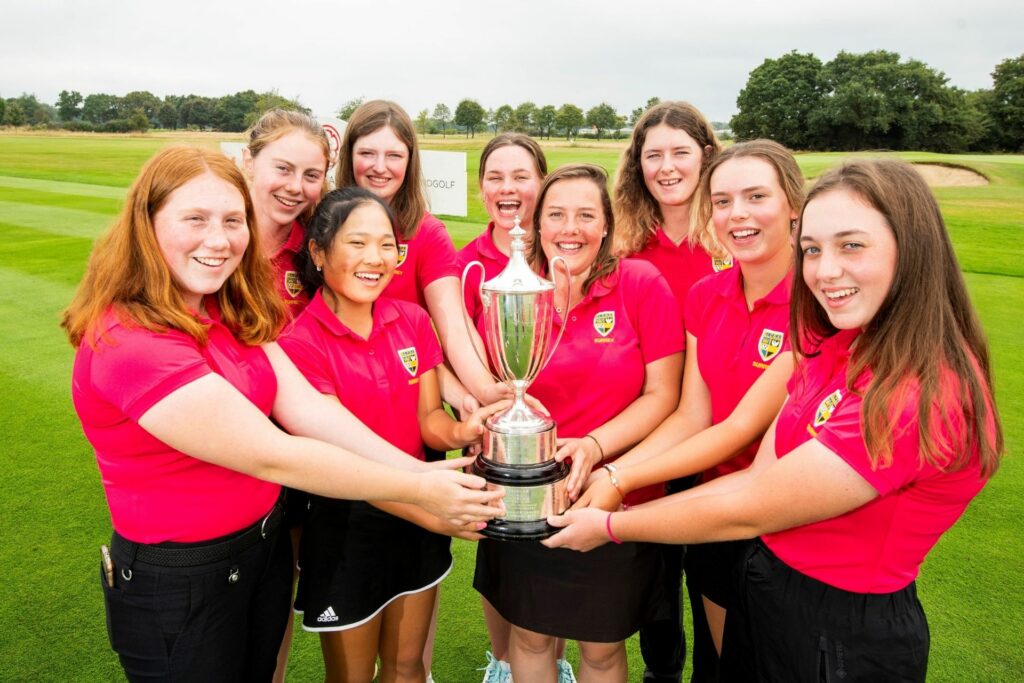 A hard-fought 3.5-1.5 win against the only county which could have pipped them to the crown allowed Surrey to come out on top in the six-team round-robin event also featuring Buckinghamshire, Hertfordshire, Lincolnshire and Yorkshire.

It was the first time since 1997 that Surrey’s women had managed to emerge as England’s top county to claim the Lady Katherine Cairns Trophy.

Speaking after the victory at Denham Golf Club in Buckinghamshire, playing captain Nicola Taylor said: “I’m a bit speechless at the moment…it’s amazing.

“We’ve been trying to do this for a while now and the team has all played their hearts out and contributed on and off the course.

“It’s not just these three days, it’s back to lockdown with Zoom calls and the whole works.

“We finally did it after a really close South region qualifier back in June when we only got through on countback, so we are thrilled.

“I’m the only one in the team that was alive the last time we won this – but I wasn’t playing as I’m not quite that old!

“We’ve had lots and lots of very good teams that have come and haven’t managed to win it so we’ve done it for us, for them and for everyone who came and cheered us on over the last three days.”

On Friday morning, Surrey opened the finals by beating Hertfordshire 3-5-1.5.

Surrey then took down Yorkshire by 3-2 and followed that up with Saturday wins against Buckinghamshire (3.5-1.5) and Lincolnshire (4-1).

Going into Sunday morning’s final encounter against Somerset, the odds were heavily stacked in Surrey’s favour.

Somerset – with three wins from their four matches – knew that they had to win and restrict Surrey to just half a point from the two foursomes and three singles games in order to win their first-ever county title.

Surrey, though, ultimately proved too strong for their nearest rivals.

Olivia Horsford – playing in her final match as an amateur before beginning her PGA training at Wentworth – teamed up with Hyun-Ji Kim to deliver the foursomes point which secured the win.

A half point delivered by Taylor and Ellie Monk – who ended the week unbeaten with four and a half points from five – was then followed by final hole singles wins for Ellen Yates and Lottie Woad.

Monk said: “We have gelled so well, always laughing, but also able to focus. I couldn’t have asked for a better team to go through the week with.”

It was a particularly successful week for Farnham’s Woad who won all five of her singles matches – including a final day encounter with England girls’ squad colleague Patience Rhodes that was laced with real quality from start to finish.

In Sunday’s other matches, Yorkshire edged out Lincolnshire 3-2 and Buckinghamshire earned a 3.5-1.5 over Hertfordshire.

Yorkshire took third spot in the table on a countback of game points having finished level on match points alongside Lincolnshire and Buckinghamshire.

Friday AM details and results

Saturday AM details and results

Sunday AM details and results