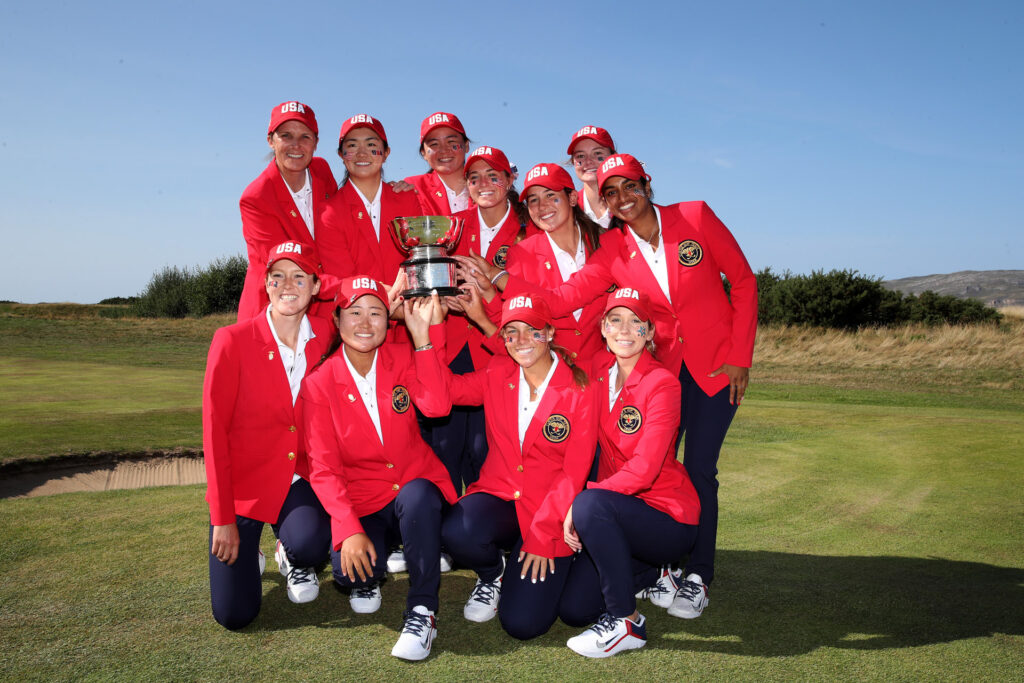 The USA completed an impressive comeback to win the 41st Curtis Cup match with a dominant final day singles performance at Conwy Golf Club in Wales.

The USA, captained by Sarah Ingram, recovered from a three-point deficit after the opening day to surge to a convincing 12 ½ - 7 ½ victory over Elaine Ratcliffe’s Great Britain and Ireland team. The Americans took a firm grip on proceedings in today’s singles winning six of the eight matches.

Commenting on the win, Ingram said:

“Just got the trophy back in my arms. Oh, it feels amazing to have come here and to come away winners. We've had a spectacular week, beautiful weather. The people are amazing here, so welcoming and helpful and cheering us on as well as their own players. We're thrilled to have come away the winners.”

In a remarkable twist of sporting fate the winning point was secured by Rachel Kuehn, whose mother Brenda achieved the same distinction in the 1998 Curtis Cup match at Minikahda and was on hand to see her daughter follow in her illustrious footsteps.

A day that had initially promised so much for the GB&I team, with the likes of Hannah Darling, Charlotte Heath and Caley McGinty taking early leads, steadily began to slip away. A tide of red began to wash across the leaderboard as Brooke Matthews, Rachel Heck and Allisen Corpuz took control of their matches.

Matthews secured the first point for the Americans with a 3&2 win over Heath and Heck soon followed up with a 3&1 result against Ireland’s Lauren Walsh.

Darling was never behind in her match with Jensen Castle and was three up with four to play but errant drives on the 17th and 18th cost the Scot dearly and Castle secured what had seemed an unlikely half point. Kuehn then saw off the challenge of Scotland’s Louise Duncan with a two-hole win to clinch the match.

England’s McGinty flew the flag for GB&I with an excellent 4&3 victory over Gina Kim. Her compatriot Annabell Fuller battled all the way in her match with Emilia Migliaccio but lost out by two holes at the last.

Emily Toy also showed great resilience to fight back from three down at the 12th to win the next three holes with birdies and take Rose Zhang down the final hole but the world number one held her nerve to seal a one hole victory.

Team GB&I’s Captain Ratcliffe was proud of her team, she said:

Find out more about the Curtis Cup here.