Curtis Cup: All to play for in the final day singles 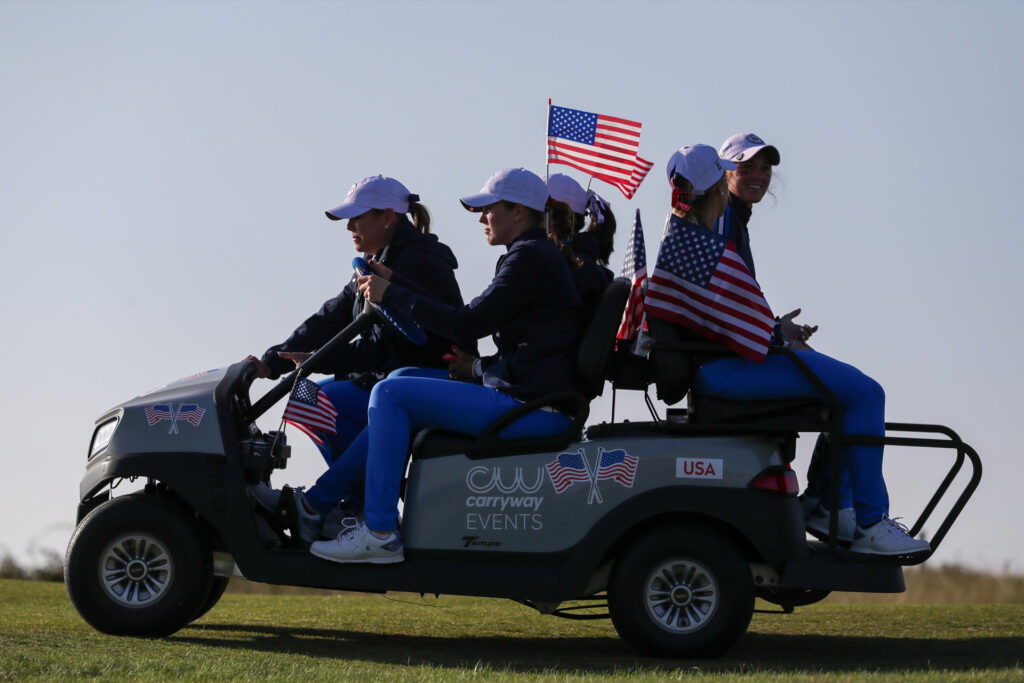 Trailing GB&I by three points after the opening day, the Americans, led by Captain Sarah Ingram, fought back to ensure the match sits level at 6-6 going into the final day singles on Saturday.

The USA made their intentions clear from the off in the morning foursomes with lead pairing Rose Zhang and Rachel Heck notching a convincing 3&2 victory over the Scottish pairing of Louise Duncan and Hannah Darling. Rachel Kuehn and Emilia Migliaccio kept up the resurgence defeating Englishwomen Annabell Fuller and Charlotte Heath by the same margin.

The USA didn’t have it all their own way, however, and the English pairing of Emily Toy and Caley McGinty secured an important half point at the last hole against Jensen Castle and Brooke Matthews. Toy holed from 3ft for a winning par five after McGinty had found the rough to the right of the green with her approach.

That left the score at 5-4 in Great Britain and Ireland’s favour going into the afternoon fourballs.

A tense afternoon at Conwy

The USA continued to ramp up the pressure in the fourballs. Kuehn and Castle seized the initiative in their match with Duncan and Lauren Walsh to go 3 up after eight and, despite Duncan reducing the deficit to one hole with birdies at the 9th and 11th, the Americans eased to a 3&2 win.

Darling and Fuller continued their successful fourball partnership by clinching a hard-fought encounter with Heck and Kim by 4&3. Darling, the Girls Amateur and St Rule Trophy champion, maintained her rich vein of form and her excellent driving was complemented by Fuller’s strong approach play as the match swung in GB&I’s favour after the turn.

Darling, the youngest player in the team, has been playing some fantastic golf this week, which has not gone unnoticed by GB&I Team Captain Elaine Ratcliffe, she said:

“She's taken it to them, she really has. She's playing some shots when she needs to, she's holing some putts when she needs to and she has a steely determination, which is second to none. So we are so fortunate to have her on our team. She's great in the team room, she's great out on the golf course and she plays with a lot of heart and you can't ask for any more than that.”

In the final match of the day the USA’s Allisen Corpuz carded four birdies in five holes from the 3rd to take control of her and Zhang’s match against Toy and McGinty. The GB&I pairing battled to stay in the match but ultimately Corpuz sealed victory with a lengthy putt from off the green on the 16th.

Zhang showcases her number one credentials

World Number one amateur Zhang is yet to drop a point this week and is proving to be the star player of the USA team, their Captain Sarah Ingram commented on what makes her stand out, she said:

“I mean, she's just an ultimate player. She's so mature in the way she carries herself, the way she hits her shots, just watching her in the practice rounds, she's just a different player, for sure. She just hits clutch shots. I mean, the last hole she takes the flag out for her sand shot. I had to take a picture of that because I thought it was pretty cool.”

All to play for in the final day

With the match tied at 6-6 it is all to play for in the final day as the singles matched get underway from 10am (BST) on Saturday.

For the final day singles draw please visit RandA.org. You can watch live on Sky Sports Mix, Curtis Cup YouTube here and it will be streamed live on the R&A Facebook page.