Amateur: The Continent of Europe wins the Junior Vagliano Trophy 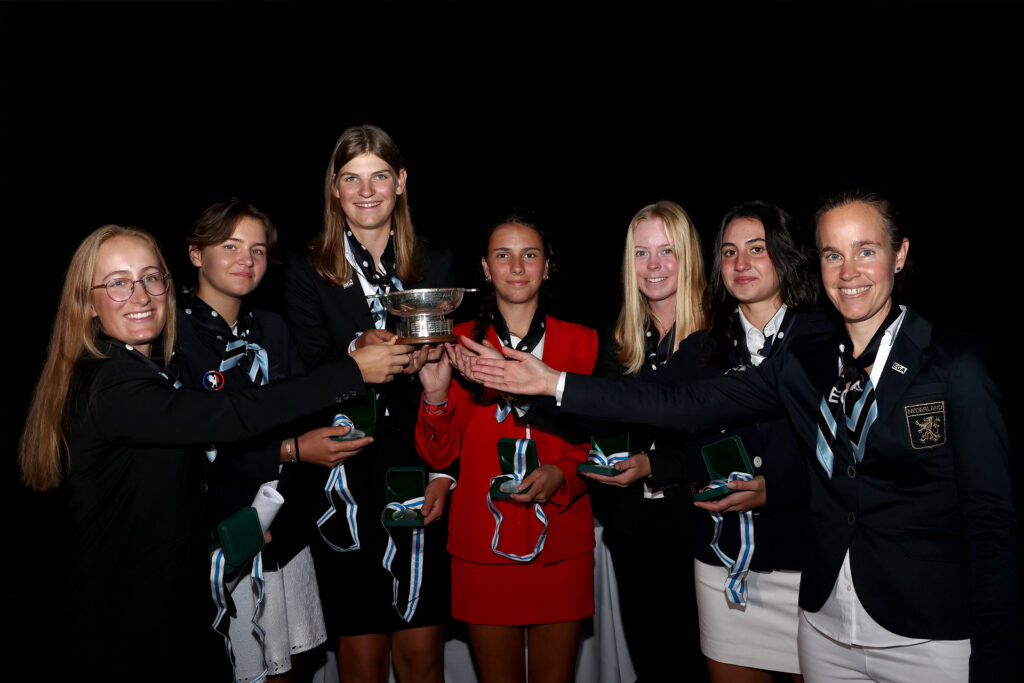 The Continent of Europe has won the Junior Vagliano Trophy after comprehensively defeating Great Britain and Ireland 14-4 at Hilversumsche Golf Club in the Netherlands.

The Continent of Europe has won the Junior Vagliano Trophy after comprehensively defeating Great Britain and Ireland 14-4 at Hilversumsche Golf Club in the Netherlands.

Leading 6½-2½ after the first day of play, the hosts clinched the trophy for the sixth successive time after a clean sweep of the Saturday morning foursomes left them in an unassailable position at 9½-2½. The hosts won the afternoon singles session 4½-1½.

A great team spirit on both sides

“I’m so proud of the players and to have watched them play at such a high level is incredible. There was such a good team spirit and that was important.

“The players were very sportsmanlike, but of course, they like to win. They always kept fighting in the matches, particularly the ones that went to the 18th hole. The chemistry in the foursomes was very good. I’m really happy with how it worked out and so are the girls.

“They are all very talented players who know their game well and so while you can help them prepare, they know the strategy and shots they will use on the course. It’s been great to coach them and there’s been a really positive attitude all week. They have been proud to play for the team. It was great to win in my country too.”

“The players for the Continent of Europe were brilliant this week and they holed out really well when it mattered. Our team is very young, we have two 14-year-olds and one 15-year-old, and so this has been very good experience for them and will help for the match next year. It’s been a marvellous opportunity for them.

“They are a great bunch of girls and they have gelled really well. They fought hard, they played hard and really enjoyed it. I can’t ask for much more. They have loved every minute of it and are looking forward to next year already.”

The Swedish pairing of Nora Sundberg and Meja Örtengren continued their devastating form to defeat Grace Crawford and Maggie Whitehead 8&6 in the first match on Saturday morning, having also recorded a 9&7 win over Rosie Bee Kim and Katie Poots on Friday.

Kim and Poots were paired again and produced a more resilient performance against Cayetana Fernandez Garcia-Poggio of Spain and Italy’s Francesca Fiorellini, losing out by a narrow one hole margin.

Helen Briem and Constance Fouillet responded to Friday’s loss at the hands of Harriet Lockley and Ellen Yates by defeating the GB&I duo 4&2 and thereby securing the all-important point that ensured the trophy would be staying in the possession of the Continent of Europe.

In the Saturday afternoon singles, Crawford pulled one point back for the visiting side with an excellent 5&3 win over Fernandez Garcia-Poggio.

However, the hosts extended their lead further after Fiorellini saw off Poots 7&5, Sundberg beat Lockley 4&3 and Örtengren beat Whitehead by the same scoreline.

Yates salvaged a half point from her match against Fouillet, only for Briem to edge out Kim by one hole in the final singles contest.

The Continent of Europe has now won the Junior Vagliano Trophy on all six occasions since the junior girls’ international match was introduced in 2011.

The 2022 Junior Vagliano Trophy will be played on August 26-27 at Blairgowrie.

View the results from the 2021 Junior Vagliano Trophy here.