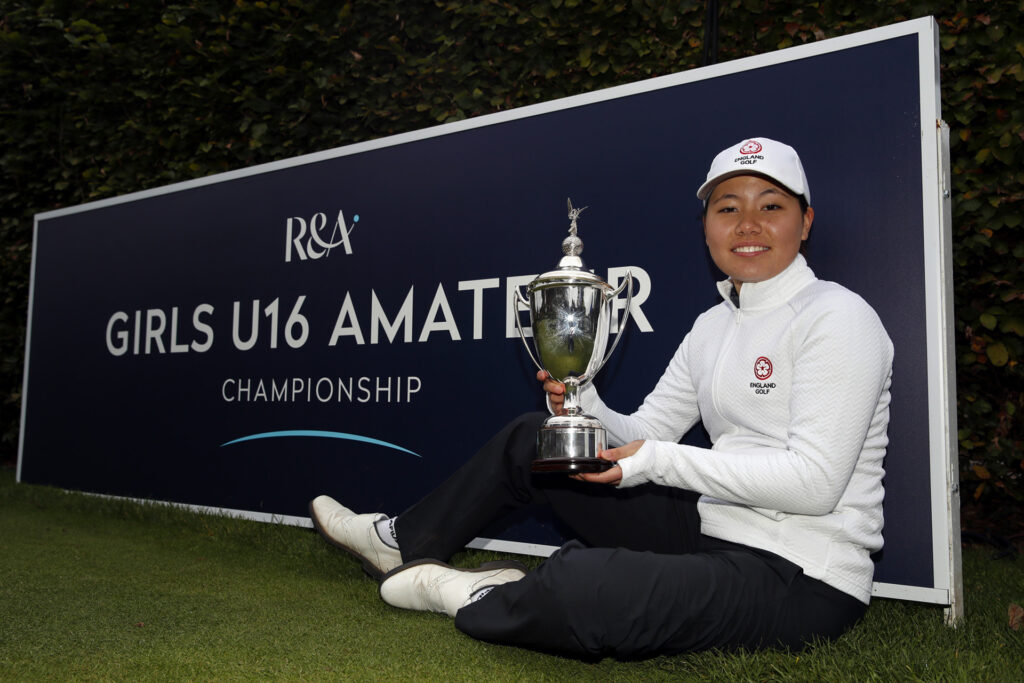 England’s Rosie Bee Kim continued her love for The R&A Girls’ U16 Amateur Championship after claiming a memorable victory at Enville.

On a tightly contested leaderboard, Bee, 14, finished with a superb one-under-par round of 71 for a level par total and joins Curtis Cup player Hannah Darling and Italy’s Francesca Fiorellini on the championship’s roll of honour.

Bee finished two shots clear of fellow England player Roisin Scanlon, who holed from 50 feet on the 18th for a dramatic par and a two-over-par total.

England’s Frankie Dezis, who led overnight with Kim, finished tied third on three-over-par, along with Grace Crawford from Scotland, Germany’s Philipa Gollan and another English player, Ellen Yates, who closed with a wonderful eagle.

"It's a big milestone for me"

Aged 10, Kim was the youngest competitor in the field for the inaugural staging of the championship at Fulford in 2018 and won the Under-12s section that year, as well as in 2019.

The Buckinghamshire member has now enjoyed more success and said:

“It sounds amazing to be champion and I’m very proud of myself.

“This is probably my biggest win so far. It’s a big milestone for me in becoming the player I want to be so I’m very happy with this.

“If I went back in time to 2018 and told myself that I was going to win the main title in 2021 I probably wouldn’t have believed myself. To have this achievement is really good.”

The final day at The R&A Girls’ U16 Amateur Championship

In calm and chilly conditions over the Highgate Course, Dezis made a shaky start after a bogey at the first but impressively replied with three birdies in five holes from the 5th.

However, she dropped four shots in the last five holes to see her challenge fade after a 74.

Maggie Whitehead – winner of the English Girls’ Under-16s in July – made a superb early move thanks to an eagle on the opening par-5, but bogeys on the sixth and ninth and further difficulties on the back nine saw her fade to a tie for seventh.

Woburn’s Scanlon birdied three of the first five holes to storm into contention but Kim, who triumphed in the English Girls’ Under-14s this summer, wasn’t to be denied thanks to a solid display.

The England Golf national squad player birdied the first, second and 12th and only dropped three shots before making another up-and-down for a birdie at the par-5 18th in front of the delighted crowd.

Kim, who also won the Under-14s section at Enville, added:

“I think steady golf won it for me, no drama and consistency. Those are my strong points. It was nerve-wracking on the 18th but I knew the scores and what I had to do. Having the experience of playing in these big events is great for me.

“This year has been a big milestone, definitely my best season yet so here’s hoping for a successful future.”

Boosting the girls' game in GB&I

The championship was introduced as part of The R&A’s drive to boost the girls’ game in Great Britain and Ireland and beyond, as well as to provide a pathway to the elite amateur level for leading young players.

Founded in 1935, Enville is one of the finest examples of heathland golf, with the field of 72 players competing in the rescheduled championship over the last three days.