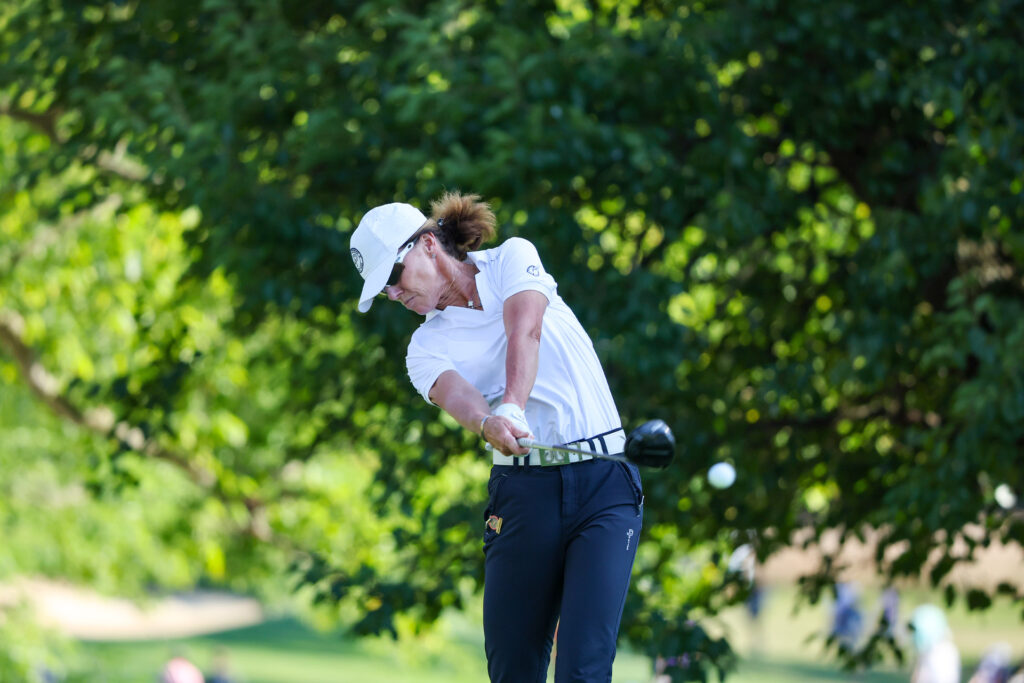 Call the first two rounds of this U.S. Senior Women’s Open a prelude to greatness. Helen Alfredsson, the 2019 champion, is leading the way at six-under-par 140, but is being chased by a who’s who of greats.

No fewer than six players with USGA trophies at home are in the hunt, setting the stage for a scintillating finish this weekend at NCR Country Club.

Occupying the two spots just below Alfredsson on the leader board are Leta Lindley, who is one stroke back at 141 after a 72 on Friday, and defending champion Annika Sorenstam, in solo third place at 143.

First-round leader Tammie Green is at 144, with Catrin Nilsmark and Jill McGill at 145 and Trish Johnson at 146.  Juli Inkster, 2018 U.S. Senior Women’s Open champion Laura Davies and Jacqueline Gallagher-Smith are at 147.

Alfredsson, who capped her round by hitting a 9-iron from 118 yards to inside a foot for a birdie on 18, was solid in every aspect of her game, making only one bogey. She hit 12 of 14 fairways and 17 of 18 greens.

“Yeah, it's gotten a little bit better,” Alfredsson said. “Yesterday was not great. Today was a little bit better, which I need. I think [the key] is to keep it in play off the tee. I have an advantage that I'm fairly long still, so you know, if I can just keep it in the fairway, I don't have that far in like some of the other girls.”

Asked how many times she has competed since last year’s U.S. Senior Women’s Open at Brooklawn Country Club in Fairfield, Conn., Alfredsson said:

Lindley joined Alfredsson as the only players to shoot under par in each of the first two rounds, following a 69 with a 72 despite making bogeys on two of the final three holes. She has only 56 putts in 36 holes.

“I did a lot of good things,” Lindley said. “A little disappointed with my finish; hit just a couple squirrelly shots. But otherwise played really solid, continued to roll my putts nicely. Just had some that just rolled over the edge, but felt like overall I played really solid other than my two bogeys coming in.”

Sorenstam, visibly upset after an even-par 73 on Thursday, began her second round on the 10th and made birdies on 12, 17, 1 and 4 while making her only bogey on the 6th as she shot three-under-par 70.

“I drove the ball better,” Sorenstam said. “Missed a few short putts, but I would say overall I was in a much better mood. I had the rhythm, had some momentum. It was fun out there, and just trying to go out there and enjoy and not feel constantly pressure in what I have to do. That's why I played better.”

Inkster, who also began her second round on the 10th, had even more work to do after a 76 on Thursday, was four-over-par after a bogey on 14, then reeled off five birdies in a row before making a triple-bogey eight on the par-5 sixth hole on her way to 71.

Green, who had grabbed the first-round lead with a five-under-par 68, got to six-under-par through six holes on Friday but played four over from there in for a 76. She’s still in the hunt.

Eight-time USGA champion JoAnne Carner, who shot her age on the number with an 83 on Thursday, matched that number again on Friday. But unfortunately, this was eight shots from the cut line.

Alfredsson is going to have a lot of company around the top of the leader board in Saturday’s third round, and many of them are familiar names she’s been tussling with for decades.