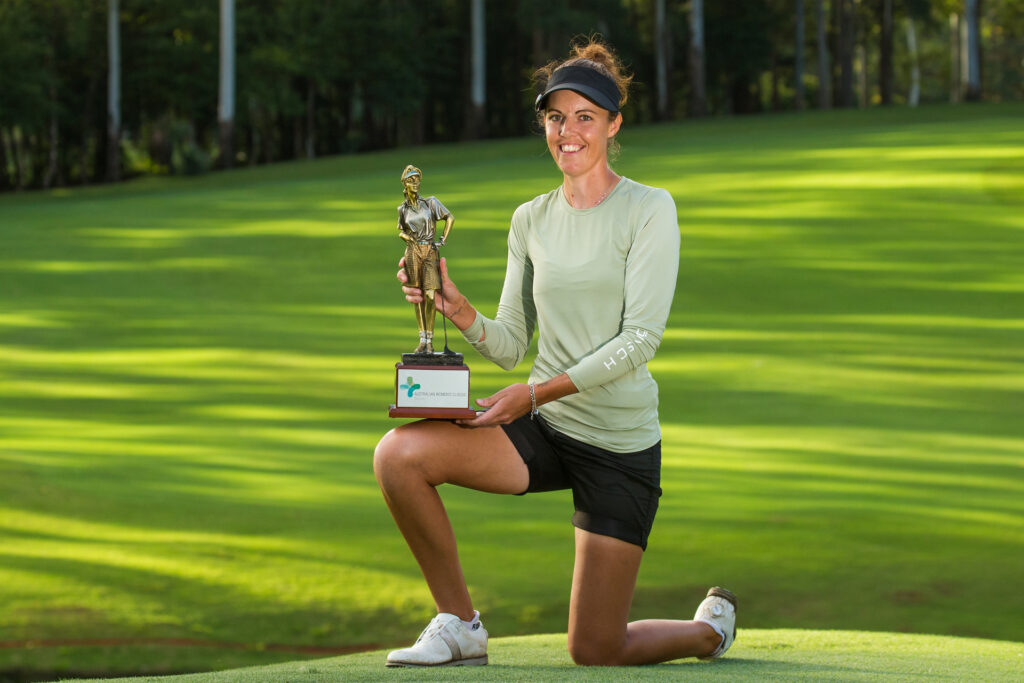 Meghan MacLaren makes it a hat-trick in Australia, Hataoka wins in Hollywood and Larrazabal wins on home soil. Here's our weekly tour round-Up.

There’s something about Australia that brings out the best in Meghan MacLaren. After spending last year on the Epson Tour, MacLaren committed to the LET towards the end of March, tweeting:

“You’re pretty sometimes America… but jumped on a plane home and couldn’t be happier @EpsonTour thanks for all the lessons over the last year and a bit. But @LETgolf is calling my name and I’m listening #trustyourinstincts #2022”

Never has a truer word been spoken as the 27-year-old dropped her putter and double fist-pumped the air as she made birdie on the 18th to seal a one-shot victory at the Australian Women’s Classic - Bonville.

A final round of 69 (-3) was enough to secure her third LET title and her third on Australian soil. The tournament had been shortened to 54 holes due to the weather.

After her win, MacLaren said:

“It means a lot! It is a little bit surreal right now. When that putt went in, it was the best feeling in the world.

“The people are amazing here and it is a place I feel really comfortable. I’m going to keep coming back here for the rest of my career.

“The support was unbelievable! It means the world to me to know people rooting for you and they want to see you do well. It really helps to spur me on, so I owe them a lot.”

Hot on MacLaren’s heels was Sweden’s Maja Stark, who carded a final round of 67 (-5) to finish on nine-under-par. The 22-year-old said:

“I played very well. I hit better irons today than I have had in a long time, but my putter wasn’t really co-operating at a couple of holes and that hurt my heart. I played pretty well, made some decent length putts and everything was pretty steady.

“I’m happy for Meghan. I just wish I didn’t make that double bogey on 13. I feel good, I’m excited and I want to go and play some more. No doubles next week.”

England’s Hannah Burke produced the joint-best round of the day signing for a 65 (-7) to move up to a share for third place alongside Argentina’s Magdalena Simmermacher and Spain’s Carmen Alonso on seven-under-par.

Australian amateurs Justice Bosio and Sarah Hammett finished in T6 on six-under-par after producing rounds of 68 and 69, respectively.

Rounding out the top 10 was Australian amateur Belinda Ji, who also carded a 65, alongside compatriot Sarah Kemp and England’s Alice Hewson.

With her second-place finish, Stark has moved up to first in the 2022 Race to Costa del Sol and has 887.50 points from three events.

South African Lee-Anne Pace is in second with 681.67, while MacLaren moves up to third place with her victory.

The LET now heads to Coolangatta & Tweed Heads Golf Club and the Women's NSW Open – will MacLaren make it a double Down Under?!

Hataoka wins in style in Hollywood

Nasa Hataoka secured her sixth LPGA Tour at the DIO Implant LA Open, winning by five shots on 15-under-par. Hataoka was the only player to shoot all four rounds in the sixities, 67-68-67-67 and capitalised on a four-shot lead heading into the final round.

The 23-year-old adds her name to a list of champions in the shadow of the Hollywood Sign at Wilshire Country Club. Here’s how she felt after her victory:

The Japanese player compared her victory to that of Jordan Spieth’s last week, after she missed the cut at the LOTTE Championship, she said:

“I don't know if I can compare this, but on the PGA Tour, Jordan Spieth missed the cut at the Masters and then won Heritage. So you never know what's going to happen in golf, so I think that was something that boosted my confidence.”

Second place belonged to Australia’s Hannah Green, who had a difficult job trying to catch Hataoka. A three-under-par 68 was more than enough to place her three shots clear of Major champions Inbee Park and Minjee Lee along with LPGA Tour winner Madelene Sagstrom who finished in a tie for third at seven-under-par.

This week, the LPGA has a new event the Palos Verdes Championship presented by Bank of America being played at Palos Verdes Golf Club in California.

Talking of five-shot victory, on the Epson Tour - it could very well go down as one of the greatest final-round performances in the tour’s history. Dottie Ardina, five strokes back of the lead held by Emma Broze entering Saturday, fired a bogey-free, seven-under-par 65 at Copper Rock Golf Course in Hurricane, Utah, to win the Copper Rock Championship by two strokes at five-under-par.

“I wanted to have fun out there and my goal was five-under to have a chance. But seven-under is even better,” said Ardina, who hit all 14 fairways. “There was never that moment because [my playing partner] Anita [Uwadia] was making a lot of birdies too, so I kind of lost track on the back nine. We were both making birdies to stay close with each other. And I did not want to check the leaderboards.”

The two fist pumps following her 12-foot birdie putt on No. 18 to seal victory captured all her emotion.

“I kept saying to myself, ‘Calm down, calm down, put a good stroke on it and you’ll make the putt.’ I did not look at a leaderboard until No. 18. I kept my focus on the line for the putt and as soon as it hit the spot I wanted it, that’s when I did the fist pumps because I knew it was going in.

"I’ve played good golf the last few years and knew I was due. I wasn’t expecting it this week because of the weather, but took advantage of how nice it was today.”

Marta Sanz Barrio and Laetitia Beck each finished at three-under-par to share second place, while Jaravee Boonchant, Anita Uwadia and Amelia Garvey ended two-under-par to tie for fourth. Five players tied for seventh including 36-hole leader Broze, who shot a three-over-par 75 in the final round.

Patrick Cantlay and Xander Schauffele held off Sam Burns and Billy Horschel to win by two shots and secure a wire-to-wire victory in the Zurich Classic of New Orleans.

Cantlay and Schauffele closed with an even-par-72 in the alternate-shot final round to finish at 29-under-par at TPC Louisiana. They broke the tournament record of 27-under-par.

Their closes challengers were Sam Burns and Billy Horschel who did get within one shot after birdieing the eighth, 10th and 11th holes. But Burns found water on 16 and they also bogeyed the 17th to finish in second place.

Cantlay, the defending FedExCup champion and PGA TOUR Player of the Year, won his seventh PGA Tour title and first since the TOUR Championship in September. Whilst Schauffele won for the fifth time. His last victory coming at the 2019 Sentry Tournament of Champions.

The PGA Tour now heads to Mexico and the Mexico Open at Vidanta.

Second win of the season for Larrazabal

Pablo Larrazabal went on a birdie streak to jump from sixth into the top spot to win his seventh DP World Tour title and his first on home soil at the ISPS Handa Championship.

A final round eight-under-par, which included five birdies in a row from holes nine to 13, was enough to give him a one-shot victory over fellow Spaniard Adrian Otaegui at the Lakes Course in Tarragona.

This is the second victory this season for the 38-year-old, who won the MyGolfLife Open in South Africa in March.

Commenting on his victory:

"What a day. I couldn't make any putts the first three days but I told my girlfriend last night that she had to choose the clothing for the (winning) pictures!

“I knew that I had a low one in my bag and that's what I did. Today I holed putts and that was key."

The DP World Tour remains in Spain for the Catalunya Championship on the Stadium Course at PGA Catalunya Golf and Wellness in Girona.