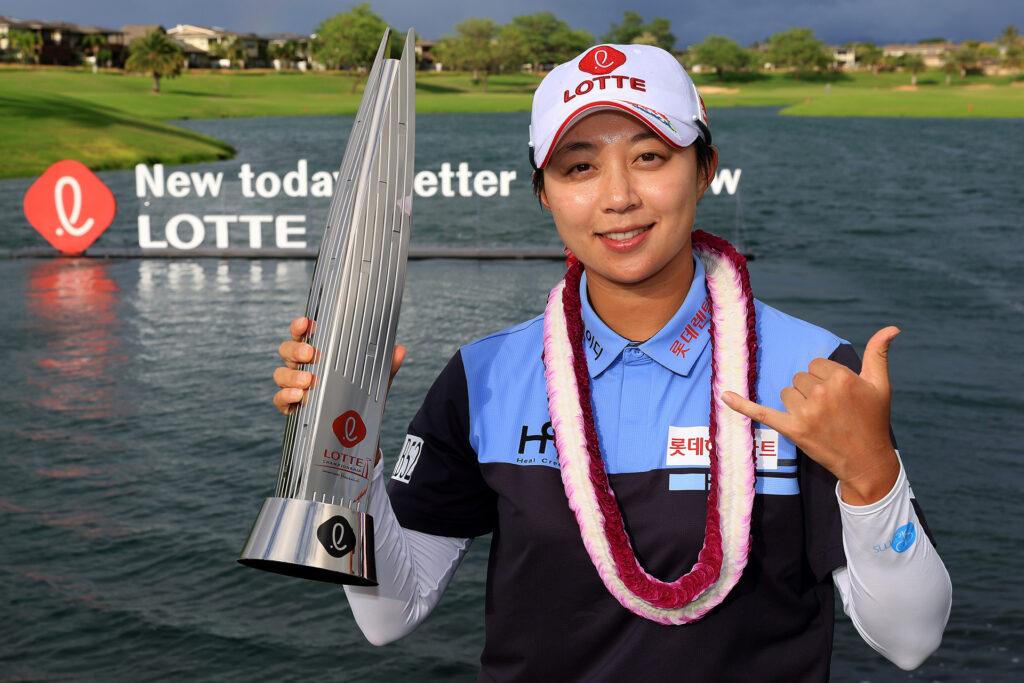 Republic of Korea’s Hyo Joo Kim captured her fifth career LPGA Tour title on Saturday, shooting a final-round 71 to reach -11 and win the 2022 LOTTE Championship by two strokes over Hinako Shibuno of Japan.

Kim, who started the day with a three-stroke advantage, bogeyed the par-3 17th to drop her lead to just one. But Kim executed a superb pitch from off the green on 18 at Hoakalei Country Club, leaving herself a two-foot birdie putt to take the victory.

“I'm proud of that shot. Maybe I made a lot of people like sit on the edge of their chairs, so I felt great about it.”

Kim always kept just a step ahead of Shibuno, who carded two birdies in the final round for a bogey-free 70. That clean scorecard was not enough to earn Shibuno her first win since the 2019 AIG Women’s Open, who pointed to the greens as her downfall this week.

“I was having very fun playing with (Kim),” said Shibuno, who earned her best LPGA Tour finish since her major victory at the AIG Women’s Open at Woburn. “My putting was a little, you know, couldn't go in, so that was the difference with her.”

A special win for Kim

Kim finally won the LOTTE Championship on her 10th try and explained why it was so special:

“I have been playing LOTTE Championship since the inaugural championship, and then because of this being my sponsor I always wanted to win and do well. I prepared a lot for this year's championship so it's all the more meaningful and special for me to win this championship this year.”

Kim’s countrywoman Hye-Jin Choi shot a final-round 69 to take solo third at seven-under-par, her best LPGA Tour finish since a tie for second at the 2020 ISPS Handa Vic Open as a non-Member. South African Ashleigh Buhai finished fourth at six-under-par, with Korea’s Somi Lee rounded out the top five at five-under-par.

Californian Brianna Do, who earned a spot in the tournament via the local qualifier on Sunday, played in the final group with Kim and Shibuno but could not recapture the magic that had been with her all week. With a five-over-par 77 on Saturday, Do fell into a tie for 12th.

Next up on the LPGA is the DIO Implant LA Open at Wilshire Country Club.

The US$750,000 event, which was co-sanctioned by the Ladies European Tour and Asian Tour, saw a Modified Stableford being used with points based on the number of strokes taken at each hole with albatross: 8 points, eagle: 5 points, birdie: 2 points, par: 0 points, bogey: -1 point, double bogey or more: -3 points.

After four rounds, Kim came out on top scoring 49 points to claim the inaugural title and finish two points ahead of Sweden’s Maja Stark, who was the best-placed female.

Heading into the final day, the 33-year-old held an eight-point lead but didn’t get off to the best of starts with a bogey on the second hole.

Three birdies on five, eight and 12 saw the American extended his points advantage at the top of the leaderboard before another dropped shot on 13th, but then came a rain delay for 90 minutes.

After the resumption, Kim came out the blocks firing with three birdies in-a-row and although he made a double bogey on the last it was enough to record his second win in six weeks.

“This is the first time I had had a 10-under and an 11-under in a tournament and my putting has just been phenomenal, that’s pretty much what got me through it, and those putts were not short either. The putts on 14 and 16 were pretty lengthy ones, I am really confident in my putting now.”

Sweden’s Stark began her day on 34 points but birdies on the first and third holes, as well as an eagle on the eighth put her within two points of leader Kim.

“A birdie on the first hole was nice. It was a six-metre putt, and I haven’t really made any long putts, so that was nice to start off with that and I feel like I gave most putts a chance and that was because of the confidence I got from the first putt.”

Putts weren’t rolling in as easily on the back nine and although the 2017 PING Junior Solheim Cup player enjoyed chasing down the American, two birdies in her last four holes was not enough to catch the Asian Tour Order of Merit leader as she ended with a total of 47 points.

“I shot -6 today and -20 is by far my best score on a four-round tournament. I’m happy with it. I feel like I have finally come back from winter golf and it being really cold and playing on even par is a fantastic score with those conditions, but I am very happy to get into the birdie and eagle mindset.”

Thailand’s Budsabakorn finished in third place on 42 points with compatriots Phahara Khongwatmai in fourth on 41 and Sadom Kaewkanjana in fifth on 40.

Korea’s Joohyung Kim and Thailand’s Natipong Srithong end the tournament in a tie for sixth place on 39 points, while Australian Andrew Dodt and Thai duo Jazz Janewattananond and Chanettee Wannasaen round out the top 10 on 38 points.

The LET now moves to Australia, one of the most popular locations on tour, for the Australian Women's Classic at Bonville Golf Resort.

It was another Easter Sunday to remember for Jordan Spieth as he won the RBC Heritage at Harbour Town Golf Links. Winning a dramatic play-off against Patrick Cantlay.

Easter Sunday 2021 saw Spieth win for the first time since his 2017 Open victory at the Valero Texas Open. Fast forward to 2022 and Spieth over-turned a three-shot deficit to take the clubhouse lead.

It wasn't to be for Irishman Shane Lowry who led with five holes to play but a double-bogey on the 14th, after finding water, became his undoing and had to settle for a share of third place.

The 28-year-old was joined in the play-off by fellow USA Ryder Cup team members Patrick Cantlay after he shot a final-round 68.

Victory was sealed for Spieth on the first play-off hole, where he produced a spectacular bunker shot to save par whilst Cantlay struggled with a plugged lie in the greenside bunker.

This win is Spieth's 13th PGA Tour victory and his first of 2022, also his first as new Dad. A very special family moment.

Next up on the PGA Tour is the Zurich Classic of New Orleans team event, which was won last year by Australian duo Marc Leishman and Cameron Smith.