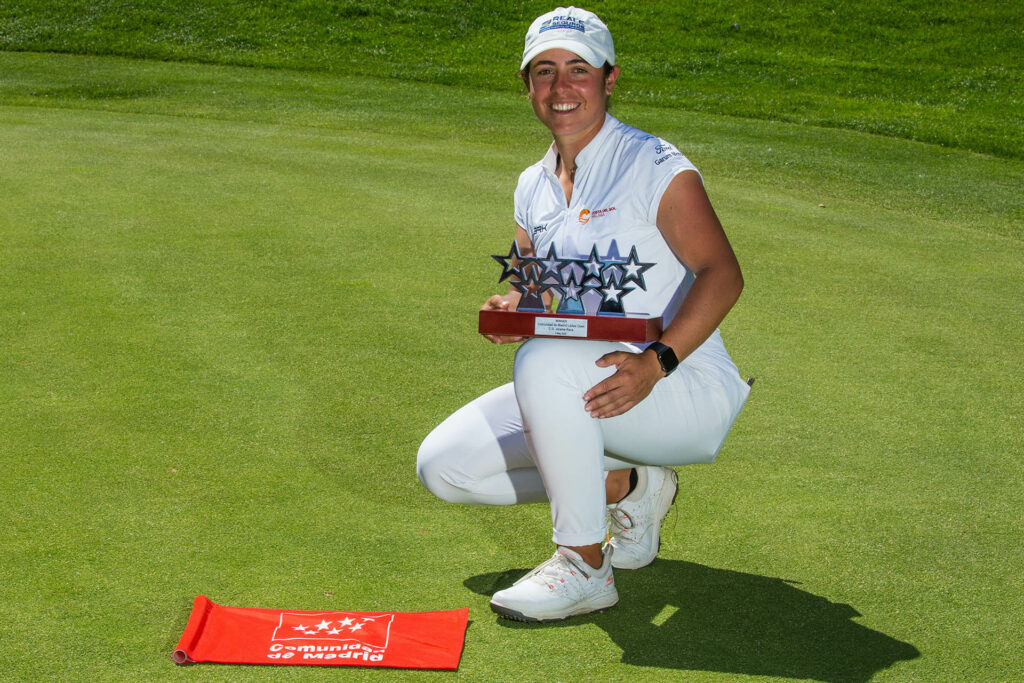 We catch up with what happened on the Ladies European Tour, DP World Tour and PGA Tour this weekend.

It was a dream start to life on the Ladies European Tour (LET) for Ana Peláez as the Spanish rookie won her first LET title at the Comunidad de Madrid Ladies Open in her debut tournament as a member.

The 24-year-old from Malaga shot rounds of 69, 67, 63 and 66 for an impressive total of 23-under-par to win by six strokes in front of large galleries at Jarama-RACE Golf Club.

Pelaez had shown flashes of her brilliance on the LET in the past when she finished third in the 2020 Andalucía Open de España as an amateur and she tied for 11th in the same tournament last year, after turning professional in July, on the eve of the Aramco Team Series – Sotogrande.

However, due to finishing in a tie for 83rd at LET Q-School in December, she had Category 18 status on the LET in 2022, which meant that she had to rely on an invitation to play in this week’s tournament.

Needing nothing less than a win to secure her full card – and a winner’s category of membership – she produced fearless golf of the highest calibre and thrived under the pressure. She even shot the course record: a nine-under-par 63 in the third round on Saturday.

Peláez, whose brother, Carlos, was her caddie, celebrated every great shot with a fist bump:

The 2015 European PING Junior Solheim Cup player, who has previously tasted success in the Spanish capital, winning the Santander Golf Tour Madrid in 2020 as an amateur, started the final round with a three-stroke lead and quickly built momentum with birdies on the first and third holes. She two-putted on the par-five first and then sank a 12-foot putt from beyond the flag at the par-three third to build a six-stroke lead.

She hit the turn in 34 and then added another birdie on the 11th before chipping in for eagle from the edge of the 14th green.

“That was a moment I’ll never forget. The entire crowd went crazy and I love it. I love the energy. It was unreal.”

Her final birdie came on the par-3 17th and she two putted for par on 18 for a huge cheer from the crowd.

“It feels unbelievably amazing. I’ve been dreaming about this moment my entire life and now I get to live it, so I’m very happy.

“This means something very special to me. For the rest of the season I’ll be based on the LET. I’d like to thank my siblings, parents, coach and his entire family.”

There were several contenders for second place and Sweden’s Linnea Strom ended as the outright runner-up on 17-under-par after posting eight birdies in a final round of 64.

Strom and Then in great form

Strom, who won the IOA Championship presented by Morongo Casino Resort and Spa on the Epson Tour in March, said:

“I played really well and if anything, it feels like I could have done even better. I’m happy and I had a great week in general so I’ll look to build on that and have a good summer.”

Gabriella Then of the United States, who won her first Epson Tour title at the Garden City Charity Classic last week, was three shots off the lead at the turn in the final round but slipped back into a share of third place alongside Pia Babnik of Slovenia (67), Manon de Roey of Belgium (67) and Spanish amateur Cayetana Fernandez (70).

Sweden’s Linn Grant finished seventh, with Ines Laklalech of Morocco in eighth spot and Olivia Mehaffey from Northern Ireland in ninth. Sweden’s Maja Stark tied for 10th and continues to lead the Race to Costa del Sol, as Peláez entered the LET’s official Ranking in a share of 10th place with 500 points.

The LET now heads to Thailand for the first Aramco Team Series event in Bangkok.

Thorbjorn Olesen produced an impressive eagle-birdie finish to win the British Masters by one shot. This was the 32-year-old's sixth DP World Tour title and first since the Italian Open in June 2018.

With a three-shot lead going into the final round at The Belfry, the Danish player trailed by two shots with two holes to play. Under pressure Olsen holed a 30-foot putt for eagle at the par-five 17th and followed that with a 35-foot birdie putt at the last to shoot a one-over-par 73 and beat Sebastian Soderberg to the title.

Scotland's Richie Ramsay was 10-under-par heading onto the 18th tee but his ball found the water and a double-bogey meant he dropped into a tie for third alongside fellow Scot Connor Syme and South Africa's Justin Walters.

A new chapter for Olsen

Olsen's victory comes six months after he was cleared of sexually assaulting a woman on a flight in 2019. Olesen was on an eight-hour flight from Nashville to London in July 2019 with other golfers following the World Golf Championships-FedEx St Jude Invitational in Memphis. At the time he claimed he was not in control after a combination of drink and prescription sleeping pills.

The Dane who had dropped to 376 in the world, will now hope that this win gets him back on form after a difficult two years:

"It was obviously a pretty tough day and I hit a lot of shots to the left. I was really struggling. I somehow just kept going, and yeah, what a finish. Incredible.

"Standing on 17, I'm thinking I can make birdie, birdie and maybe get into a play-off. But obviously when I got the chance on 17, I prefer to take that. Eighteen is a tough hole, so par is a good score obviously. I just gave it everything."

Just one week to go until the next major of the season, the PGA Championship. This week the tour moves to Belgium and the Soudal Open at Rinkven International Golf Club in Antwerp.

Second PGA Tour title of the season for Homa

Max Homa secured his second PGA Tour title of the season, his fourth overall, after coming from two-shots behind to beat overnight leader Keegan Bradley by two at the Wells Fargo Championship.

A two-under-par 68 at TPC Potomac from the American was enough to finish the week on eight-under-par and take the victory.

Fellow American Bradley struggled during the final round, posting a final two-over-par round to drop back to six-under-par alongside Cameron Young and England's Matt Fitzpatrick.

After his victory the 31-year-old said:

"Keegan is a really good golfer, he hits it so well and holed some really good putts. I was just trying to play my game and see what happened. He made an unbelievable birdie on 16 while I was trying to not make double, so I just knew he wasn't really going to go away."

Rory McIlroy finished off his title defence with back-to-back 68s over the weekend, after struggling to make the cut.

This week it's the AT&T Byron Nelson at TPC Craig Ranch in McKinney, Texas.