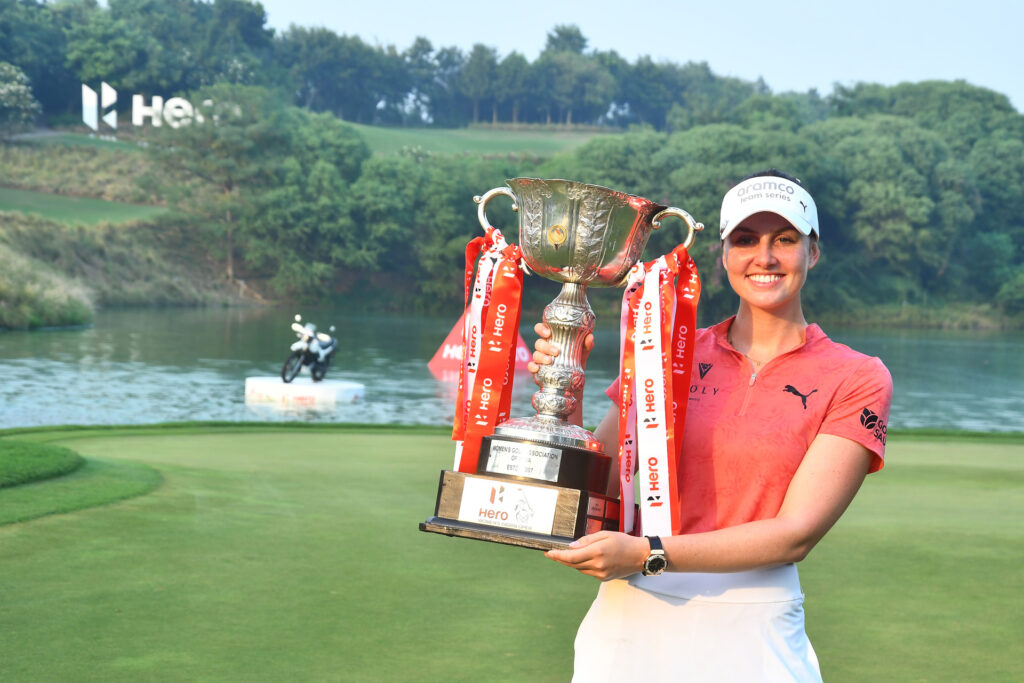 Olivia Cowan produced a brilliant final round of 68, four-under-par, to win the Hero Women’s Indian Open at the DLF Golf and Country Club to claim her maiden win on tour in her 96th event.

With no less than 27 Top-10 finishes before this week, the German finally entered the winner’s circle after totalling 13-under-par 275 to win by three shots over home favourite Amandeep Drall (72) and Caroline Hedwall (71), who dropped a shot on the 18th to slip from sole second to joint second with the Indian.

Cowan picked up the biggest cheque of her career at US$ 60,000, while the 2011 winner Hedwall was runner-up for the third time in five starts at the Hero Women’s Indian Open.

After winning her first LET title since coming on the Tour in 2015, the 26-year-old was very emotional at the prize presentation. She said:

“I have come close a few times, but I am so happy to get over the line. I love coming here and this is going to be one of my most memorable moments and I will come back again to try and win this Trophy again.”

"I was quite relaxed. To be honest. The whole weekend.  I wasn't really thinking of winning this time. I just wanted to go out there and have a good mindset and just play good golf. I was playing good golf so I just decided to trust that and come out today and just see what happens."

Cowan’s previous two visits to India produced finishes of 19th in 2017 and ninth in 2018 and this year her best on the Tour was fourth in her home event, the Amundi German Masters.

After starting the final round one shot behind home favourite Drall, Cowan was still one behind at the turn and tied with Hedwall for second. Hedwall birdied the 11th and Cowan birdied the 12th to join Drall at the top. The trio playing together parred the next two holes.

With four holes left and three players tied at 11-under-par, a play-off looked imminent, before Cowan holed a crucial birdie on the Par-5 15th. With Drall dropping a bogey on the same hole, Cowan was sole leader at 12-under-par, while Hedwall was 11-under-par and Drall fell to 10-under-par.

From there she did not look back, as her two challengers found it difficult to find a birdie, Cowan almost nailed the title with yet another birdie on the dangerous  17th to move to 13-under, two clear of Hedwall and three ahead of Drall.

But the German wasn’t taking anything for granted even with a two-shot lead heading down the last, with the memories of losing a similar lead at the Aramco Team Series - Jeddah last year in her mind:

“I was aware of what can happen even on the last hole,” she said with a smile.

Cowan admitted, “In the morning before the start, I knew I had a chance because I was only one back. But on the course, I was not comfortable or sure until the end, because anything can happen. And I do remember what happened to Christine Wolf (in 2018).

“Maybe after the birdie on 17th, I felt I could win, but on this course nothing is for sure.”

After securing her best ever finish on the LET in second, Drall was satisfied with her week’s efforts, having provided the home crowd with hope of a second Indian winner of the event after Aditi Ashok in 2016.

She said: “I am pleased with the performance, even though I did not win. I felt if the putts in 12th and 13th, the first from seven feet and the other from nine feet were crucial.

“If they had fallen, I would have got the momentum. But overall, I am happy the way I held out and this should improve my ranking and get me more events.”

The rise of women's golf in India

It was a great week for the home golfers, who had four players in Top-8 with the Tokyo Olympic fourth-place finisher Ashok (71) in fourth place, while Gaurika Bishnoi (73) and Vani Kapoor (69) capped her tenth straight cut in the tournament with a Tied-eighth place, while T6 place was Bishnoi’s best at the Hero Women’s Indian Open.

The day’s joint best card came from the Indian amateur, Avani Prashanth, whose five-under-par 67 saw her finish 12th overall. Two other young Indians, Nishtha Madan (73), who plays on the Epson Tour in the US, and Hitaashee Bakshi (71), who a week ago won the LET Pre-Qualifiers to get into the Final stage of Qualifying School, were tied 20th.