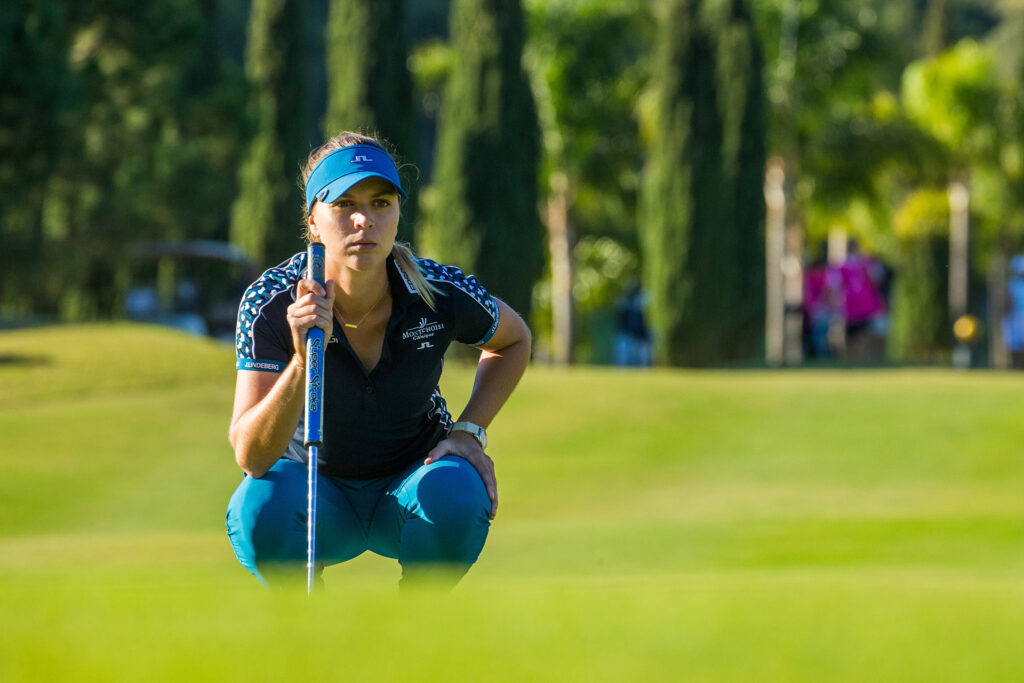 Morgane Metraux heads into the final day with a two-shot lead whilst Grant and Stark will battle it out for player of the year.

LET winner Morgane Metraux holds a two-shot lead with one round left to go at the Andalucía Costa del Sol Open de España at Alferini Golf.

The 25-year-old began the day a few shots off the lead and fired a round of 67 (-6) to put herself on 14-under-par at the top of the leaderboard.

Metraux, who won the 2022 Ladies Italian Open, began her round with back-to-back birdies on two and three before rolling in two more on nine and ten.

After a dropped shot on the 14th, the Swiss star finished the day in style with three birdies in four holes to lead heading into the final day.

“I’m very happy with my round,” she said. “Yesterday, I didn’t putt so well so it was great to see some putts go in and to roll it a bit better. The long game has been really solid all week, I’m really happy with today.

“I played really well two weeks ago on the LPGA at Pelican to keep my card over there. I was pretty confident coming in here and the conditions are really soft which is something I enjoy. I came in with no pressure and to enjoy it and it’s going really well.

“My game has definitely been trending this year, through the whole year and to finish the season this well – we have one more day and we’ll see what happens. I’m really confident and to see my game in that sort of shape at the end of the season is really fun.”

Three players are in a tie for second place after 54 holes with Sweden’s Caroline Hedwall, Ireland’s Leona Maguire and Spanish amateur Cayetana Fernandez all on 12-under-par.

It was another solid day for six-time LET winner Hedwall as she carded a round of 69 (-4) which included three bogeys, five birdies and a tap-in eagle.

“I got off to a really good start, but then I took two bogeys, so that was a bit tough. I tried to just stay patient because I know there’s birdies on the back nine and I did that really well.

“It was a bonus to make that tap-in eagle on 16 and birdie on 17. I’m really proud of myself today and looking forward to tomorrow.

“I have never made an albatross; I’m still waiting for one. It’s always nice to pull off shots at the end of the round like that. I think I was struggling a bit on the greens today; they felt a little bit quicker so it took a little bit longer to adjust, but hopefully I can roll it a bit better tomorrow and make a couple more birdies. It will be a fun day.”

Ireland’s Maguire headed into the tournament off the back of a second-place finish at the CME Tour Group Championship and has played consistently throughout the week.

“It was pretty steady; I didn’t really hole any putts. I left myself above the hole a lot which made it quite tricky. I’m two shots back, I will just try and post a low round tomorrow and see what happens.

Carlota Ciganda only three shots back

Defending champion Carlota Ciganda is in prime position heading into the final day and sits only three shots back on 11-under-par in outright fifth place.

The Spaniard signed for a round of five-under 68 which included an eagle, five birdies and two bogeys on day three.

“I feel I started playing pretty solid,” said Ciganda. “In my brain today, I was trying to hit as many greens as possible and give myself chances.

“I hit eight greens on the front nine, so all I had to do was be patient because you can still make a few birdies. The last few holes are birdie holes for me, I stayed patient and made some good up-and-downs and putts for par. I think it was a solid day and with the last three holes being eagle-birdie-birdie it was a bonus, but I’m very happy with the round.

“I think two or three shots on this course is nothing. You can make birdies and you can make a double bogey very easily. The key is to have the ball in play, to not have penalty shots and then to give yourself those opportunities, you can play with those par-fives and be four- or five-under there.”

The final round will begin at 8.30am local time with the 2022 Race to Costa del Sol being decided on the last day of the LET season.

But who will win the Race to Costa del Sol order of merit?

The Ladies European Tour (LET) season for 2022 is nearly over having had 32 events this year, there is just one round of the final event left at the season-ending Andalucía Costa del Sol Open de España at Alferini Golf.

There is plenty to play for with many battles having come down to the final event. Here is what you need to know:

Battle for number one on the Race to Costa del Sol (RTCDS):

If Linn Grant finishes tied alongside or above Maja Stark in Spain, she will win the 2022 RTCDS and become the fifth player to win the Order of Merit and Rookie of the Year titles following in the footsteps of Laura Davies, Carlota Ciganda, Esther Henseleit and Atthaya Thitikul.

If Maja Stark wins the finale in Spain, she will win the 2022 RTCDS. Stark will also win if she finishes in second place and Grant finishes in solo third palce.

Got it?! Definitely worth watching the final round tomorrow when coverage starts at 12pm GMT - you can watch in the UK via Sky Sports Golf YouTube