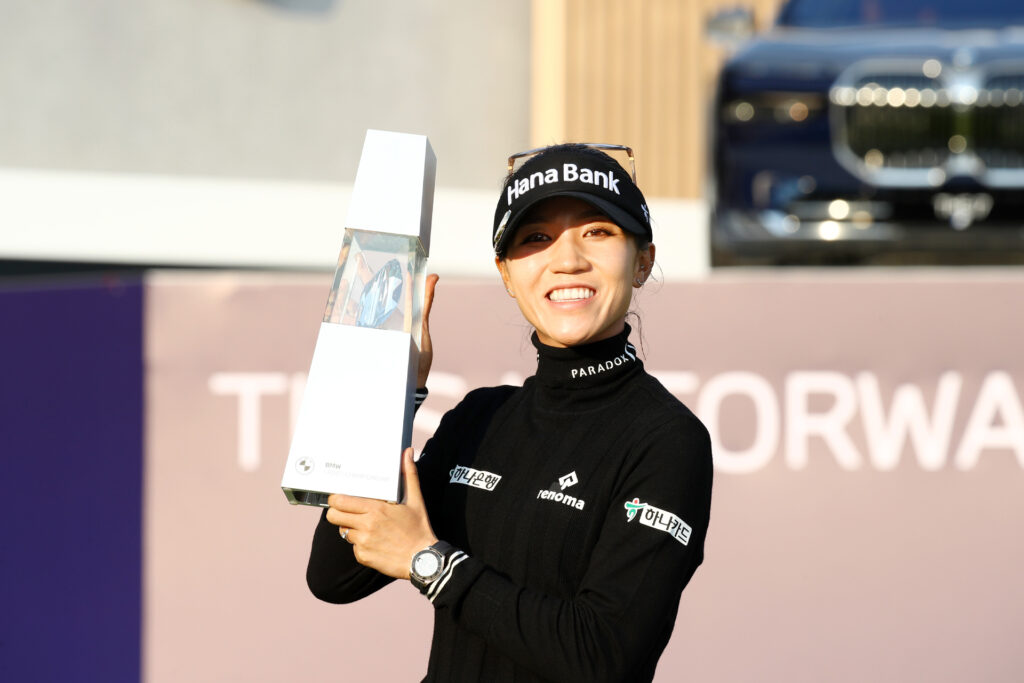 Ahead of the BMW Ladies Championship in Wonju, Republic of Korea, 17-time LPGA Tour winner Lydia Ko had finished in the top five in 8 of her last 11 starts, coming oh-so-close to nabbing a second 2022 win so many times throughout the year.

Unsurprisingly, as she began the day just one shot back of 54-hole leader Atthaya Thitikul, the Korean-born Kiwi certainly wasn’t going to let another opportunity slip away without a fight. Ko got things rolling right from the start, birdieing the second hole to get to -15 and remain one back of Thitikul who also birdied the par 5.

Ko carded another birdie at the par-5, fourth to tie the lead at -16, and as Thitikul started to crumble, Ko began to surge ahead. She broke even with a bogey on seven and a birdie on eight to make the turn at -16, and after birdies on the 10th and 11th holes to get to -18, Ko suddenly had a three-shot lead.

Coming down the stretch, she rattled off birdies on holes 15, 16 and 17 to get to -21 and put herself five ahead with one left to play. Ko closed it out with a par on the last to post a seven-under-par, 65 and capture the 18th title of her LPGA Tour career, not too far from her birthplace of Seoul.

Watch final round highlights from the BMW Ladies Championship

“I was able to feed off good momentum. I had a couple of stretches where I made consecutive birdies. For me, the big turnaround was my birdie on 10. To be honest, if it didn't go in, I had a pretty hefty par putt coming back. I was able to feed off that. I normally don't do first pumps, and I did a couple of first pumps on my back nine because I knew how much every single of those putts would count.

“I feel so proud to be born in Korea. Because of that I really wanted to win here. It's not only just a place that I'm born, but a lot of my family is still here. This week my relatives are here, my direct family is here and I wanted to win it for them as well. To be able to do that this year in front of a lot of them, it means a lot.”

Ko is now the fifth player to earn two or more wins on Tour this season, joining Thitikul (2), Brooke Henderson (2), Minjee Lee (2) and Jennifer Kupcho (3), and 2022 marks her first season with multiple wins since 2016. The $300,000 winner’s check moves her ahead of In Gee Chun to second on the Official Money List with $2,647,062 earned this year. When asked if this is her best season yet considering her consistency throughout 2022, Ko says she counts it among the best - if not as the best - of her nine years on Tour.

“I think this is probably the best I've played, the most consistently I've played. When I was No. 1, I just had more wins in that season. I don't think I've had as many top tens,” said Ko. “I wanted to finish my season off strong, including this one, with only three events to go. To be able to win this one means a lot, and I think it gives me good motivation for my last couple of events in Florida.”

A fourth top five of the season for Andrea Lee

Epson and LPGA Tour winner Andrea Lee birdied the par-5, 18th to post a four-day total of -17 and finish four shots back of Ko. The bogey-free, three-under-par, 69 saw her make birdie on three of the four par 5s at Oak Valley Country Club to earn her fourth top five of the season. It’s the second time since Lee became a Rolex First-Time Winner at the AmazingCre Portland Classic that she’s finished in the top 10, and with three events left on the calendar, she’s still trying to add another title to an already impressive 2022 resume.

“I would love to maybe win one more to close out the year. That was the goal today, but, you know, it wasn't meant to be,” said Lee. “Huge congrats to Lydia (Ko). She's such a legend, and we all look up to her, and she's such a great human, great golfer. Just a huge congratulations to her.”

A trio of players finished in a tie for third at -16, including LPGA Tour rookie Hye-Jin Choi, Epson Tour graduate Lilia Vu and Wonju native Hyo Joo Kim. Though she wasn’t able to chase down Ko, Kim was still very proud of the show she was able to put on for her hometown crowd and was grateful for the opportunity to play a BMW Ladies Championship at Oak Valley.

“This is the first LPGA event held in my hometown, and although I didn't win, I think I did very well,” she said. “So I'm pleased, and I'm especially pleased that I was able to show the other players and the world my hometown.”

No top of the world spot for Thitikul

Two-time Tour winner Thitikul, who had the opportunity to reach World Number One finished in solo sixth at -13 after a two-over-par, 74, unable to recapture the magic she had in round one, and Thailand’s Ariya Jutanugarn was alone in seventh at -12. Multiple LET winner Linn Grant and 2021 U.S. Women’s Open presented by ProMedica champion Yuka Saso finished tied for 8th at -11 with five players sitting in a tie for tenth at -10, including major champions Hannah Green and Danielle Kang and Korean amateur Minsol Kim.