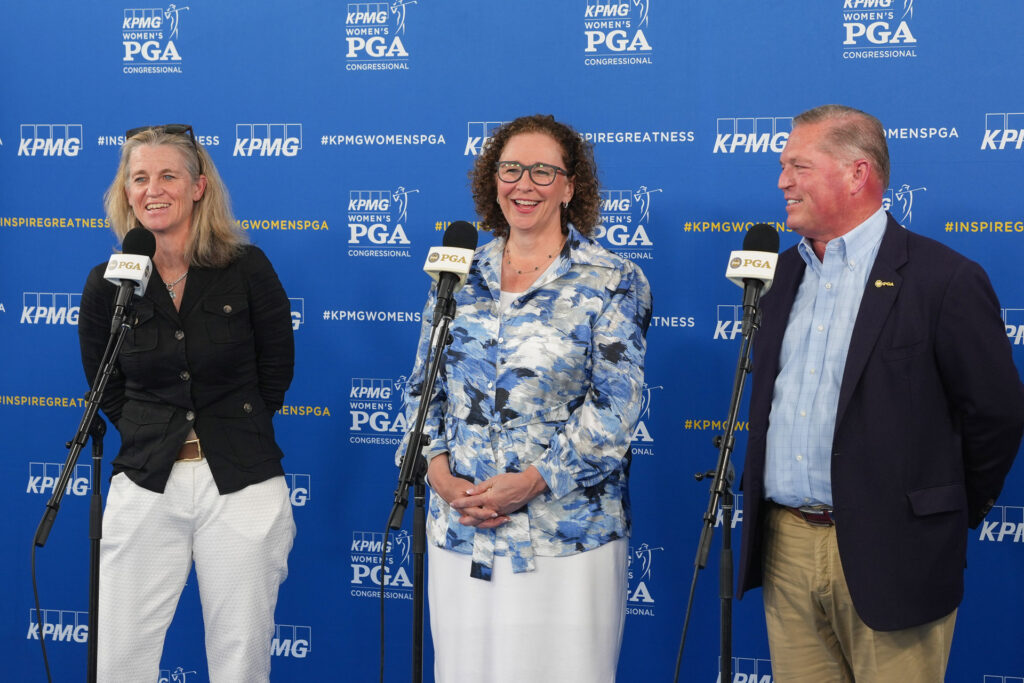 The KPMG Women’s PGA Championship has built on the history and tradition of the LPGA Championship, which began in 1955 and is the second-oldest major in women’s golf.

This year’s $9 million prize fund is double the $4.5 million total awarded last year and represents a 300% increase since 2014 ($2.25M), the year before the PGA of America and KPMG began their collaboration. The winner’s share of the prize fund will also be doubled to $1.35 million.

Jim Richerson, President of the PGA of America, said:

“When the PGA of America partnered with KPMG and the LPGA Tour in 2015, we promised to elevate this event by increasing the purse, conducting it at venues with a history of hosting men’s major championships such as Congressional Country Club, and delivering broadcast network coverage with NBC Sports. As part of our shared commitment to support and showcase women’s golf, we have delivered on those promises.”

The quality of the venues

Over the coming years, the best women golfers of the LPGA Tour will showcase their talents at Baltusrol Golf Club (2023) and PGA Frisco (2025, 2031), the new home of the PGA of America. Congressional will host its second KPMG Women’s PGA Championship in 2027.

“Doubling the purse from $4.5 million to $9 million is another example of KPMG and the PGA of America’s dogged commitment to the LPGA and our athletes. We could not be more grateful for their steadfast leadership in growing the women’s game and providing our athletes and future athletes with opportunities commensurate with their world-class talent."

"We're on an upward trajectory"

“We've had a tremendous response from all the majors, and we're on an upward trajectory. I think there is a tremendous amount of value in our women as athletes. We expect that to continue to grow. But people have to go at their own pace, and we have great partners across the entire TOUR, and everybody is drilled in to how do we continue to grow.

“This is a very big day for the LPGA, for women’s golf and for women’s sports and we look forward to working with KPMG and the PGA of America to continue to use our platform to empower young women and inspire positive change in the world.”

“I will say as a sponsor, we like the notion of pressure and momentum in the growth in the game, in what it brings in terms of attention and awareness. The recognition of the value of the sport as the entertainment value, the participation value, the drawing women into the game. As a sponsor, this isn't a competition. It's a come-along and let's do right by the game in terms of what we're putting into it.”

KPMG will continue to elevate the women's game

After the announcement, KPMG Ambassador and USA Solheim Cup Captain Stacy Lewis gave her thoughts on behalf of the players:

“A couple of girls already said to me how amazing it is. I knew it was going to be big, but not quite this big. It's amazing. I don't know how many times you can say it. KPMG from the start have raised the bar.

“It pushed the USGA. It pushed the R&A to step up, and they're doing it again. I don't think they're done. They've always had ideas that have been far ahead of everybody else, so I think there's more coming.

“This championship is in a great spot, and they've elevated women's golf, and they're going to continue to do it.”

The field for the 2022 KPMG Women’s PGA Championship includes 99 of the top 100 players on the LPGA’s Official Money List, along with nine PGA/LPGA Club Professionals, who will measure their exceptional talents on a historic Major Championship stage.

A collaboration between KPMG, PGA of America and LPGA, the KPMG Women’s PGA Championship combines an annual world-class, major golf championship with the KPMG Women’s Leadership Summit and KPMG Future Leaders Program – all focused on the advancement and empowerment of women on and off the golf course.