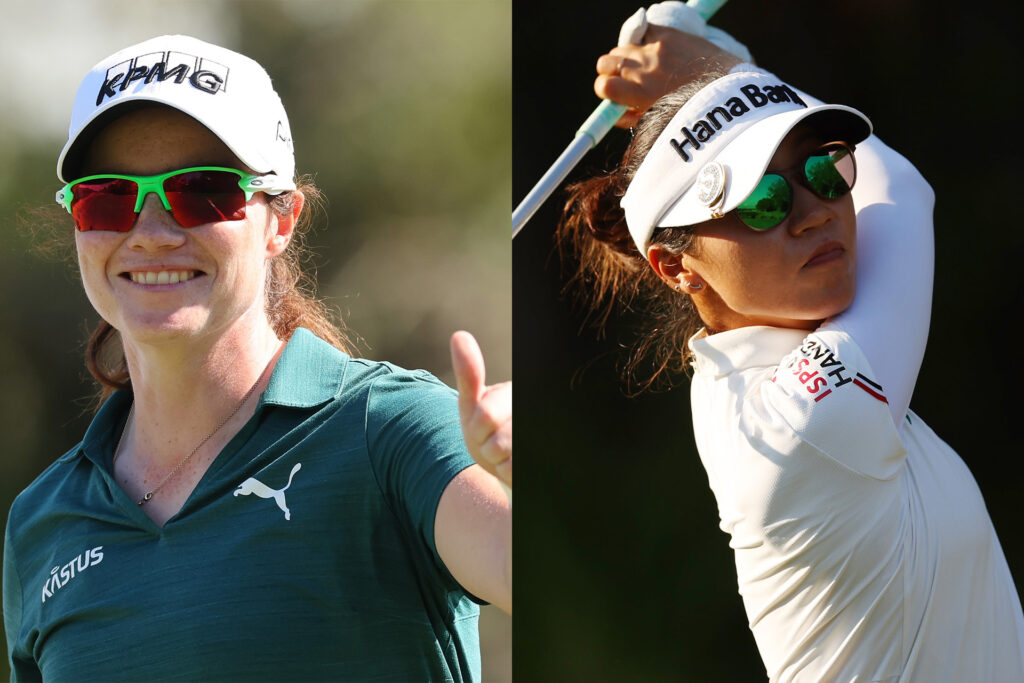 Leona Maguire and Lydia Ko hold a five shot lead heading into the final round of the 2022 LPGA Tour season.

With 18 holes left to play, Leona Maguire and Lydia Ko have cemented themselves as the top two contenders for the CME Group Tour Championship at -15 overall. Ko is vying for her second Tour Championship victory and 19th Tour win, while Maguire is looking to add a second title to her CV since becoming a Rolex First-Time Winner at the 2022 LPGA Drive On Championship.

It was almost a career day for Ireland’s Maguire, who started the day seven strokes behind 18- and 36-hole leader Ko. She ultimately finished with a bogey-free, nine-under-par 63, one off the tournament record recorded by Ko in the second round in 2016, and two off her career-low. Maguire started out with two birdies on one and three, but kicked it into gear in the middle of the round, notching five in a six-hole stretch between holes eight and 13.

Watch third round highlights from the 2022 CME Group Tour Championship

“The hole was looking big, and I was trying to hit it as close as I could. Hit some really nice 5 and 6 hybrids on those few holes at the wind. I was just dialled in today,” said Maguire, who has made 12 birdies and no bogeys in her last 27 holes. “My caddie has been talking the last two weeks all about patience and they're going to drop. Finally, they did today, which was nice.”

Maguire made two more birdies on 16 and 17 to sleep on a third-round lead/co-lead for the second time in her Tour tenure, and first since her victory at Drive On. A win on Sunday would have Maguire surpass the $4 million mark in career earnings with $4,328,359, thanks to the $2 million winner’s check, the largest in the history of women’s golf.

“We'll have to wait to see how bad it gets. Maybe a little rain, a little wind. Nothing I'm not used to from Ireland,” said Maguire, who is making her third appearance in the Tour’s season finale. “Nice to get a really low round under my belt today and just try to go out and do the same tomorrow.”

Ko had a slower Saturday after her bogey-free 66 on Friday. She was even on the day through her first nine holes after two birdies and two bogeys, but carded two birdies on 10 and on the par-5 17th to put herself in prime position to become the second player to win the CME Group Tour Championship twice.

With a victory, Ko would earn her second Rolex Player of the Year award, her second consecutive Vare Trophy and the Official Money Title of the 2022 season. Winning this tournament, the Vare and POTY honours would also give Ko three LPGA Hall of Fame points, inching the Kiwi closer to the required 27 points and induction.

“It was a little breezier today, but overall, I still thought I played really solid. A few putts here and there that could have, should have, would have. But, you know, it was one of those days where probably it wasn't that much different, but from not taking advantage of some of the par-5s and all that was probably the few shots that made it a difference during the last couple of days,” said Ko. “I still felt like I hit the ball really solid, and when it's windy, I feel like your margin of error is much smaller. Even if you don't hit the greatest shots, it just gets emphasized a little bit more. I think that's just what makes it trickier.”

Jeongeun Lee6 and Gemma Dryburgh sit in a tie for third at -10 overall. Dryburgh, who played her way into the CME Group Tour Championship after winning the TOTO Japan Classic, is in the penultimate Sunday grouping after a three-under-par 69, looking to chase down the leaders in her debut appearance in Naples.

“Just taking the confidence from Japan into this week. Been swinging very well and putting well as well, so just riding all of that confidence at the moment,” said Dryburgh. “And it's been fun to get into contention. You never know what can happen tomorrow.”

A pair of major champions in Brooke Henderson and Anna Nordqvist round out the top five at -9. Four players sit in a tie for seventh at -8 overall, including 2022 Tour winners Hyo Joo Kim and Danielle Kang. Rolex Women’s World Golf Rankings No. 1 Nelly Korda limped home on Saturday with a +1, 73 and is tied for 12th at -6. Defending champion Jin Young Ko carded her first round in the 60s this week, a three-under-par 69, to sit in a tie for 40th along with Florida native and 2018 champion Lexi Thompson.