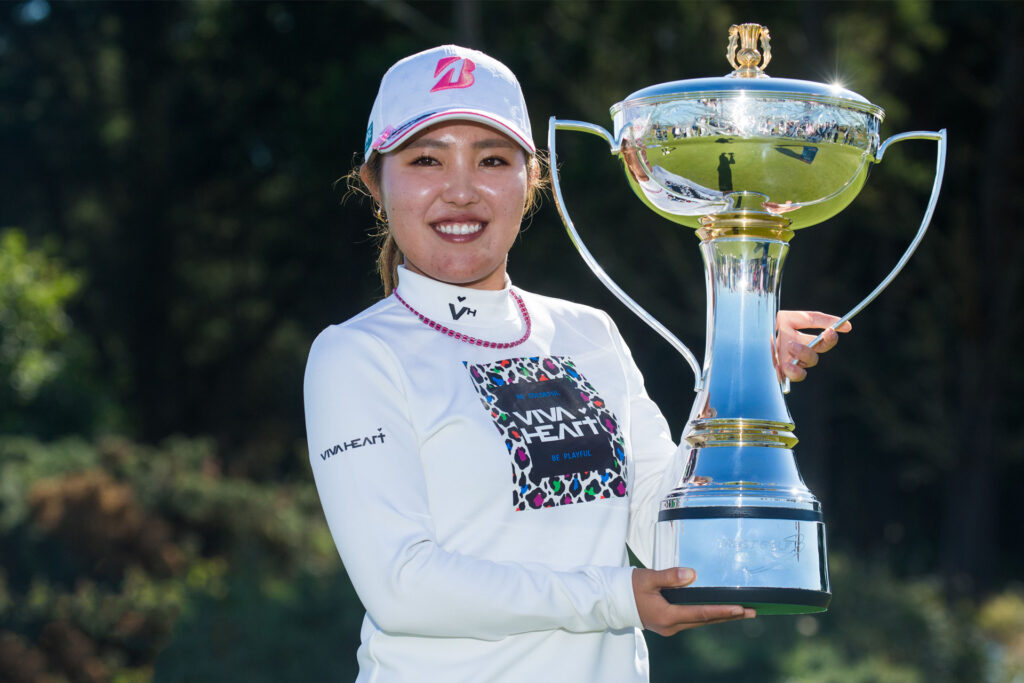 The 22-year-old began the day in a tie for ninth place, five shots behind the leading duo, but started her day with a birdie on the first.

After a run of four pars, Furue kicked into top gear rolling in six birdies in-a-row from holes six through to 11 to put herself in clear contention.

Another birdie on 15 put the seven-time JLPGA winner in front and back-to-back birdies on the last two holes sealed victory on 21-under-par in Furue’s first appearance at the Trust Golf Women’s Scottish Open.

“My shots and putting and all-around game was very good and when I needed to make big birdie putts, I was able to make them,” said the rookie, who had Glasgwegian Michael Scott on her bag.

“With this win, it builds up a lot of confidence for me and I’m looking forward to having more big tournaments and playing at next week’s AIG Women’s Open.

“Mike is always a big help to me, and I am so happy that I was able to win in Scotland and near his hometown of Glasgow.”

France’s Celine Boutier, who was the co-leader after 54 holes, finished in second place after producing a round of 69 (-3) on the final day.

Coming into form ahead of the AIG Women's Open

The two-time Solheim Cup winner had seven birdies and four bogeys on her scorecard on the fourth day to have a total of 18-under-par at Dundonald Links.

“Starting the round, I knew I had to shoot a low score, even though I was tied for the lead,” said Boutier. “And on this course, you can score pretty low. I was trying to focus on my own game and not pay too much attention on the leaderboard. She just had a really great day, so there was nothing I could have done.

“Obviously, I’m a bit disappointed at the moment but I feel like my game has been very solid all week and I put myself in position. Playing the final round, in the final group, is not always easy to manage. I feel like hopefully I'm going to gain some experience from this and next time I'll be lifting the trophy.

With the final Major of the year next week at Muirfield, Boutier is going to take the positives and what she has learned here into the AIG Women’s Open.

“I feel pretty good. I feel like my irons, approach shots and short game have been very solid especially, so I'm just hoping to take that into next week and it is great preparation.

“It was a little bit windy and there is a little bit of preparation for next week. That's the main thing, I don't think I could have expected a better week than how I played.”

Korea’s Hyo-Joo Kim and American Cheyenne Knight ended the tournament in a share of third place on 17-under-par after carding rounds of 66 and 65, respectively.

One shot further back in a tie for fifth place were American Alison Lee and New Zealand’s Lydia, while Japan’s Nasa Hataoka finished in seventh place 15-under-par.

Qualifying for a Major

And it was an excellent day for Meechai, who secured her spot at next week’s AIG Women’s Open with her top-10 finish.

She is joined by compatriot Chanettee Wannasaen and Spain’s Carmen Alonso as the three qualifiers from the Trust Golf Women’s Scottish Open.

In the 2022 Race to Costa del Sol, the top of the rankings remains the same with Swedish trio Maja Stark, Linn Grant and Johanna Gustavsson in first, second, and third.

England’s Georgia Hall moves up to ninth place and has 970.85 points with Germany’s Leonie Harm now in 13th (840.69), while Boutier secured her first points of the year claiming 400 and she sits in 43rd place.