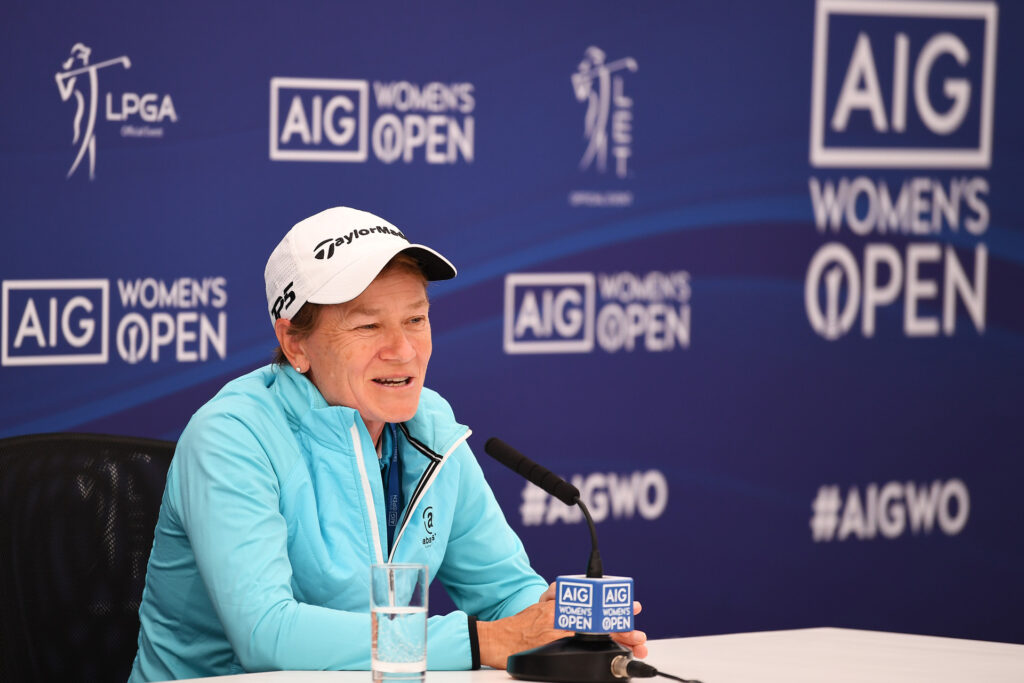 Catriona Matthew, the 2009 AIG Women’s Open Champion, will have the honour of hitting the opening tee shot of this year’s Championship. Matthew will tee off at 6:30am on Thursday, alongside last year's Smyth Salver winner Louise Duncan, who recently turned professional and Sophia Schubert.

At this stage in your career, to play here at Muirfield and hit that opening shot, where does that rank in terms of things you've done?

I think it will be great. Quite early, 6.30, but I think obviously I've been fortunate enough to win it [Women’s Open]. To play so close to home and obviously stay at home and hit the first tee shot, it will be fun.

What do you remember from your first time visiting Muirfield?

I think probably one of the first times I remember was as a litter picker for one of The Opens here, and then I was actually a scorer a couple of times. So I do remember it was horrific weather one of the times I was scoring, and then I was actually fortunate enough to be in John Cook's group the last day when Faldo won [1992] with 18 pars, and John Cook I think missed that little putt on 17. So that's kind of the memories I have of here.

How many times have you played Muirfield?

A question a lot of people think of this week is: What does it actually mean it the women involved to play here?

I think it's great to come here. Obviously over the last probably ten years, we started going to all The Open venues that over the last 50-60 years you've seen the men playing at. I believe that just elevates this Championship and we are now going to courses that people are used to seeing The Open and the majors on. I think it's good for us.

You're obviously aware that the backstory of the women members finally being admitted here, that process was ongoing but what were your thoughts?

Obviously, the initial vote was disappointing but I suppose that was quickly reversed, and I think they are now delighted to have lady members. I've got a couple of friends who are members. Everything is always moving forward, and they now have women members who are allowed to come and play here. I think you just have to look forward rather than look backwards.

Golf, starting in Scotland, we had a lot more traditions perhaps; that we're just gradually moving with the times.

You talked about elevating the status of the tournament. How does it differ from your first Open and what are your memories?

First one, I remember I played as an amateur at Woburn at the Duke's Course. When I played it, it felt like the pinnacle, and that was the event to play in. It had big crowds and all the people I looked up to watching playing. Looking back, it still felt huge.

But now coming to these venues that like I said people have watched over the years and the same venues that the men are playing just puts it to another level.

How much can this inspire the next generation of girls coming through now; the fact that you get to play venues such as Muirfield?

Any girls or boys who are golfing can see both the men and the women playing the same golf courses, which is good. Hopefully, we will put on a good show here and inspire some people to take up the game.

What does life look like now that you no longer have all the Solheim Cup duties?

Obviously, I'm not playing quite as much now but keeping busy. Helping out Scottish Golf doing quite a lot with them with the amateurs in Scotland. Playing a little bit of golf myself, being at home with the kids and taking them around from place to place.

I’m planning to play in the U.S. Senior Women’s Open at the end of August. Plus I’ll be playing in a few LET events, it’s amazing how busy you can keep yourself!

Two-time Solheim Cup Captain Catriona Matthew will tee off at 6:30am on Sunday – find out all you need to know about the 2022 AIG Women’s Open here.