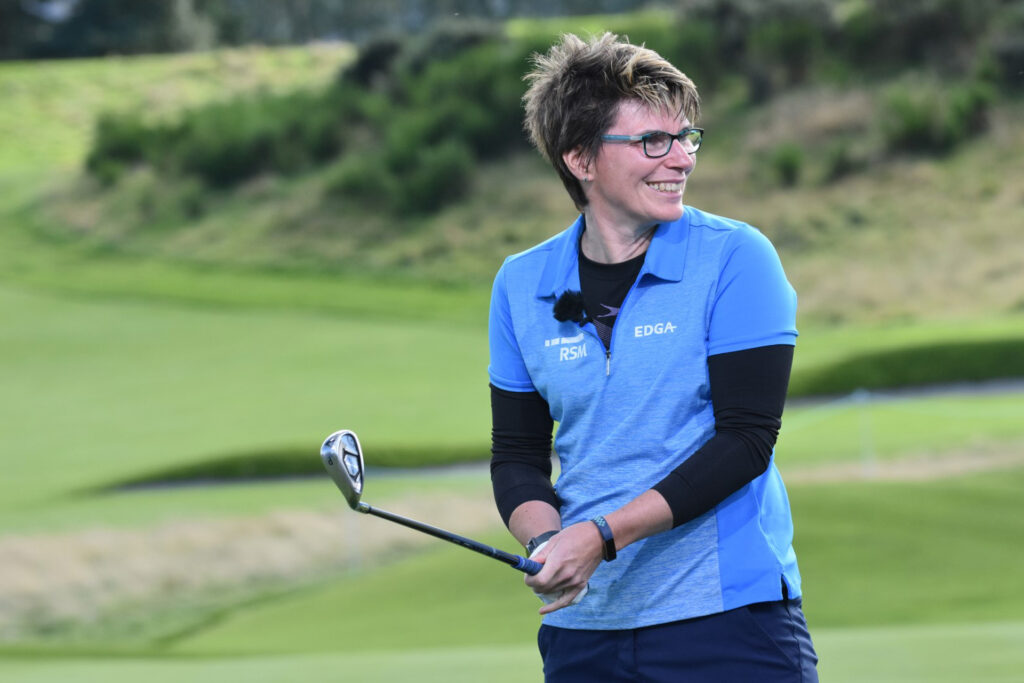 EDGA, the international body for disability golf, shares the story of Aimi Bullock who had a life-changing MS diagnosis but she hasn't let it hold her back

As with many ‘twenty-somethings’, Aimi Bullock led a full-on life. There was work: training in an accountancy firm, and studying two or three hours per night to pass her examinations. There was her lifelong passion for hockey, which started as a ten-year-old and saw her becoming an essential part of Sunbury Hockey Club, in South of England Division 1. Her beloved football team Spurs also had to be factored in and a busy social life too.

Earlier, a typical school day would end by flying through her homework before running out of the house to do something sporty. She caught the cycling bug and enjoyed races from London to Brighton throughout the night.

At first, golf didn’t appeal, and her limited attempts were with right-handed clubs though she is a lefty. Aimi was later invited to try again by a hockey pal and this time, using some left-handed sticks, she found herself enjoying the game and she booked a few lessons at a local course.

One morning, with a busy schedule of work ahead for her firm of accountants, Aimi woke up feeling terribly hung-over, although she hadn’t touched a drop the night before. She battled on, got ready, but she almost crashed her car on the way to the office because she felt so poorly. She then started to experience headaches and severe pain behind her left eye. Her doctor asked Aimi to take a look at the eye chart, and all she could see was the top letter.

At first, she was diagnosed with ‘Optic Neuritis’, considered a clinically isolated syndrome, and life moved on; for Aimi, this meant at full throttle. She continued with 50-60 hour working weeks, training for hockey, cycling and going out. In retrospect this was a “massive mistake” Aimi concedes, as now and then she would experience more small warning signs; she would feel quite anti-social and stressed about life in general.

In the garden, her brother threw a ball to her, which she misjudged, allowing it to sail over her head. On another day she found herself continually tugging at the sock on her right foot; something was wrong. More tests followed and just a few months before her 40th birthday, Aimi received the news that her diagnosis was Multiple Sclerosis, ‘MS’ for short, a condition that affects the brain and spinal cord.

Mothers usually know best, and Aimi would take her Mum’s sound advice: “You are just going to have to get on with it.”

Aimi says: “I was very naive thinking that MS was just about issues with walking etc, but it is far more complex. For me, tiredness and cognitive issues are probably the hardest things to deal with.”

Fatigue can strike at any time. In Aimi’s case, she has to control her body temperature as when it rises too much it can reduce her vision significantly. She, therefore, manages her fluid and food intake very carefully to ensure good sight.

Aimi’s neurologist, Dr Richard Nicholas, has been a constant supporter of Aimi’s golfing aspirations. He says that having to get herself to the course, preparing to play, communicating with others, selecting a club and shot, controlling her movements to swing the club and hit the ball, are all perfect tasks for her.

And golf has been life-changing for Aimi. She can be as competitive as back in her hockey days and has met some amazing people in the EDGA tournaments that she plays in when not playing at her local golf club. After enjoying Woking Golf Club for nine years, Aimi recently joined Bletchingley Golf Club in Surrey.

Aimi could now have settled for the 18-hole round once a week with friends, but given what she has been through she is passionate in helping other players with a disability; to spread the vibe regarding all the physical and mental health benefits golf can bring.

This started in earnest after playing EDGA events abroad, and then Aimi discovered two other female golfers with MS in the Home Counties, making firm friendships with Nicky Weeks from Camberley Heath Golf Club, and Gail Owen from Hampstead.

Her reaching out to others led to her being selected as an ‘EDGA Advocate’ (a trusted volunteer tasked with encouraging other people with a disability to join the game), and she was later invited to use her golf and management experience in joining the EDGA Board as Director of Development. In this role, she has recently helped organise golf days for EDGA players in England (including a successful event with leading audit, tax and consulting firm, RSM), golf development clinics to assist players with an impairment to learn the game, and she has set up – and oversees – a special Facebook page for women players.

Most notably perhaps, Aimi worked with Kate Rose and her team during the Rose Ladies Series, where she gathered together a group of players with different disabilities to play in a total of five events over the last two summers. The keen women invited along were quick to champion Aimi’s pressure-easing blend of humour and kindness as they teed it up in the presence of top players like Alice Hewson and Dame Laura Davies.

“It was a real honour to help with these events and meet some great women,” said Aimi. “The highlight for me was just how much fun we all had together. We were all super competitive but there were smiles and laughter all the way. I’ll never forget these special days for all of us.”

Before the Covid pandemic Aimi was selected to be a student on the prestigious R&A Women in Golf Leadership Development Programme, and though study was inevitably interrupted by the virus, the cohort of students all worked hard to graduate in the autumn of 2020. This study, and all her hard work for EDGA, not to mention her day job, may have been exhausting at times but Aimi still had time to get married to her partner Kirstie in the summer of 2019!

It seems that her Mum’s advice has been very well taken indeed.

You can read more about Aimi and more inspiring stories from the EDGA players at www.edgagolf.com.