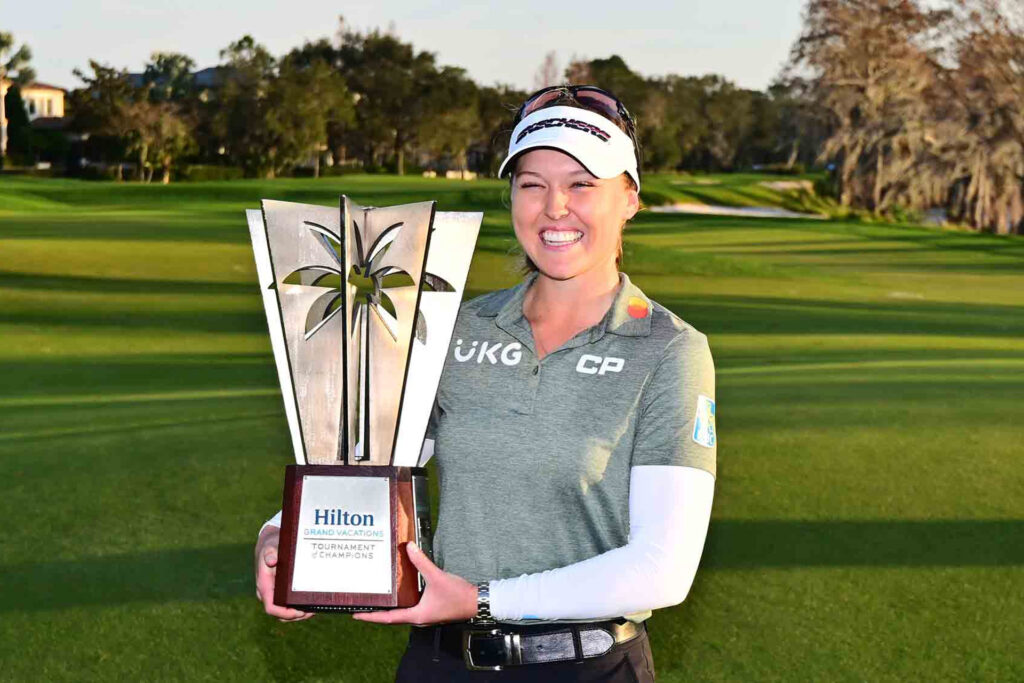 Strong start to the season from Brooke Henderson, Jon Rahm continues to dominate whilst Victor Perez wins in dramatic fashion.

The LPGA Tour 2023 season kicked off in style at the Hilton Grand Vacations Tournament of Champions. Not only does the event feature a limited field of 30 LPGA Tour players, all winners from the past two seasons, but it’s also filled with sporting stars, actors, media personalities and of course the goat herself Annika Sorenstam.

The professional field is strong, so coming out on top is not an easy task. However, Canada’s Brooke Henderson didn’t look back after posting a first round five-under-par 67 to lead by one shot. After round two she was leading World number two Nelly Korda by four shots and headed into the final day with a three shot lead.

Remaining calm and composed on the final day, the 25-year-old closed with a two-under-par 70 to finish on -16 and secure her 13th LPGA title and third career wire-to-wire victory by four shots at Lake Nona Golf and Country Club.

“It is a really talented field. It's Tournament of Champions, so it's really the best,” Henderson said. “It was really cool to get off to the hot start we did and carry it all the way through, and to have consistent and under-par rounds was really exciting… Coming into this week I couldn't have asked for anything more. It was kind of the dream start, which is really exciting looking forward to the rest of 2023.”

Tricky windy conditions for the final round

Windy conditions on Sunday were a challenge for the entire field, who struggled to put pressure on Henderson’s lead. After 54 holes, the two-time major champion was leading the field by three shots and, despite recording her highest score of the week on Sunday, increased that lead to four shots over runners-up Maja Stark and Charley Hull.

Henderson struggled to find her target throughout the round, hitting just six of 14 fairways and 13 greens in regulation, but she excelled at scrambling and putting, her greatest strength throughout the week. With three bridies and just one bogey on the card, her final round at Lake Nona marked her 16th consecutive round under par on the LPGA Tour and also at the HGV Tournament of Champions.

“I feel like a lot of my wins have come in windy conditions. I wasn't happy to see it so windy, but it didn't really shake us too much,” Henderson explained. “It was really difficult conditions today, at least I was finding it that way, so really happy with the two-under round. Not as many birdies on the card, not as many good looks, but I feel like the ball striking was still very consistent.”

Hull kicks off the season well

Joint runner-up England’s Charley Hull hadn’t had that much practice in these conditions heading into the week:

“It was pretty windy out there today. I'm not going to lie. I feel like I have done quite well this week considering that all I've been practicing on all off-season is icy greens, wet conditions, and slow conditions, so, yeah, I'm pretty happy with that.

“That was a tricky little putt down that hill, and I found putting hard in those conditions today, because the greens are so fast and the wind blowing off the lake, you don't know what it's going to do the with ball too much.”

The LPGA returns to a regular schedule in a month's time at the Honda LPGA Thailand at Siam Country Club, Pattaya Old, Thailand.

If you’re going to win your first Rolex Series event and put yourself into a Ryder Cup qualification position, why do it the easy way! Victor Perez kept us all on the edge of our seats as he secured his third DP World Tour victory and became the first Frenchman to win a Rolex Series event.

It was a dramatic final round of the Abu Dhabi HSBA Championship at Yas Links Abu Dhabi where a number of players were in contention.

In the end, a final round 66 from Perez was enough to secure victory but it was the last two holes that added to the drama. The 30-year-old holed a sensational bunker shot on 17 to take a two-shot lead into the final hole.

However, he did not make it easy for himself. After finding sand from his tee shot, he nearly went out of bounds with his second but managed to regain his composure to card a bogey and set the clubhouse lead at 18-under-par.

Min Woo Lee had a chance to force a play-off when he almost got a final hole eagle and Perez’s playing partner Sebastian Soderberg could only manage a par. Both players finished tied second. Padraig Harrington also came close to becoming the oldest winner on the DP World Tour but ended up in fourth place.

Perez became emotional after his biggest tour victory to date:

"It's a great year ahead. There's a lot of big things coming up. I've had a really good off-season, I've worked really hard, and it's just great."

"I got off to a good start and I was just focusing on me and trying to do the best I can, because you can't control what anyone else is doing. I was trying to plod along, but Seb was fantastic, he never gave me an opening.

"I'm just delighted to finish on top. It was a crazy finish but I'm used to that by now. Hopefully, I can make it a little easier for the next one. It came up a little skinny, I'm not going to lie, and then spun back and the just the fortune of the ball going in. It's probably the greatest shot I've ever hit."

This week the DP World Tour stays in the Middle East for the Hero Dubai Desert Classic.

It’s four wins in six starts for Jon Rahm as he claimed a one shot victory over rookie Davis Thompson to secure his second PGA Tour title this year at The American Express on the PGA West Stadium Course in California.

Jon Rahm held off rookie Davis Thompson to win his second PGA Tour title this year at The American Express in California.

Rahm and Thompson were tied with three holes to play but on the 16th, 23-year-old Thompson pulled his drive into a fairway bunker and could only save par whilst Rahm made birdie.

On the par-three 17th, the American chose to leave the pin in for his 50-foot birdie putt, and the ball hit the pin and rolled away, again meaning he only made par.

Rahm finished 27-under-par and won for the ninth time on the PGA Tour. The Spainard will now move to third in the world whilst Rory McIlroy is knocked off the top spot by Scottie Scheffler who finished in a tie for 11th place. Why Rahm isn't World number one will continue to be debated.

"Had I had the same putting I had yesterday or Friday it probably would've been a runaway victory, but can't ask for everything. You learn in every single situation, and today was definitely a stressful day.

"Got a little lucky that Davis' putt didn't go in on 17 and a little fortunate that his ball just got over the green on 18.

"What a heck of a player he is. He's doing all the right things and wouldn't be surprised if he wins soon, because he gave me a real battle today and it was a lot of fun. I'm sure there'll be many to come."

American Thompson, on only his 20th PGA Tour start, was one shot back at 26-under-par, his best career finished. With Xander Schauffele and Chris Kirk tied for third.

A special mention to Schauffele who holed out for an albatross on the par five fifth hole on his way to a 62, the lowest round of the day.

This week the PGA Tour heads to San Diego and the Farmers Insurance Open at Torrey Pines Golf Course.