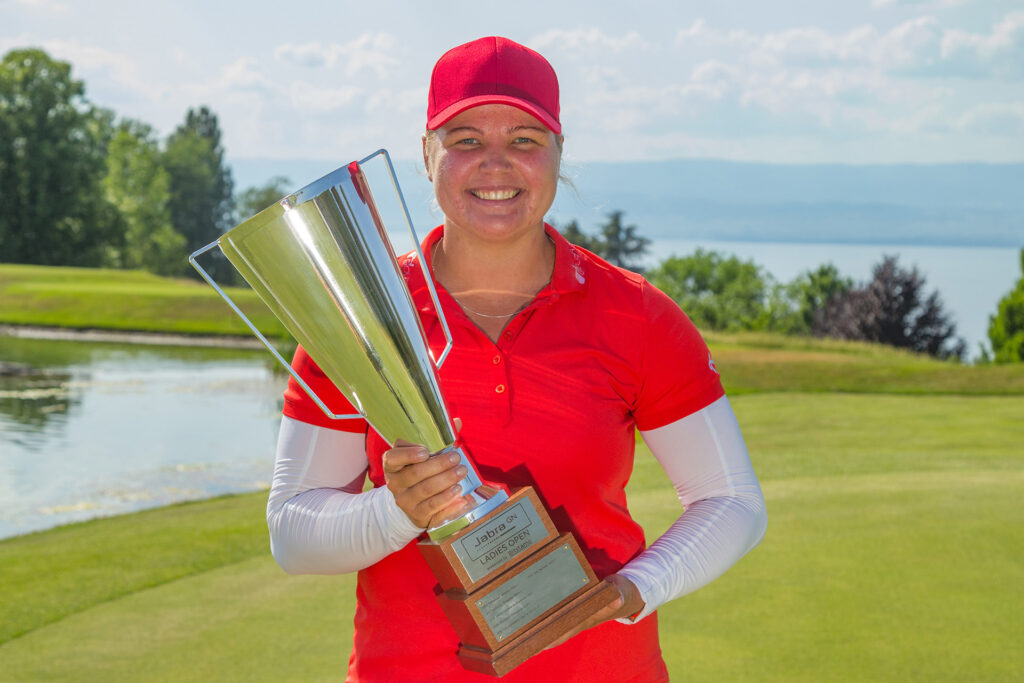 Both the Ladies European Tour and LET Access Series events end in a play-off. Here's what happened...

Tiia Koivisto triumphed in a play-off to win her first LET title in the Jabra Ladies Open presented by Bitstamp.

Playing in the penultimate group, the 28-year-old from Finland fired a final round of five-under-par 66 to set the clubhouse target at Evian Resort Golf Club in France.

Australian Whitney Hillier, who took a one stroke lead into the final round, carded a 69 to join Koivisto on six-under-par after 54 holes, forcing a play-off down the iconic par-5 18th hole.

Fellow Finnish player Sanna Nuutinen joined Koivisto to act as her caddie for the play-off, returning the favour after Koivisto caddied for her when she won on the LET Access Series.

At the first extra hole, Koivisto split the fairway with her drive and then struck a 5-iron into the rough left of the green from 165 metres. She then chipped to two metres and rolled in a straight putt for birdie, to take the win and deny Hillier who was also chasing her first LET victory.

Talking of her win, Koivisto, who won the LET Access Series Order of Merit in 2020, said:

“It feels amazing. I actually made one of my first LET starts here in Evian and now I’ve won it, so I just can’t believe it.”

The win was also her first cut made in five appearances in the event.

“I’ve been putting so well the whole week and today I was hitting some good shots so I got the job done.

“I was checking the scores on 16 and before I hit my second shot on 18, so I knew I had to make a birdie there and I went for it.

“Sanna was caddying for me on the play-off hole and she’s one of my best friends so it was great to have her on the bag to make me more relaxed. We talked through all the shots. I knew that if I made a good stroke on the last putt I could do it, and when it went in, it felt so good.”

With her victory, worth €37,500, Koivisto earned a place in the field for The Amundi Evian Championship, which will be her first appearance in a Major. She also moved into fifth place on the LET’s Race to Costa del Sol Rankings.

“I guess I can be roommates with Sanna again at The Amundi Evian Championship, because we were rooming together this week after a long break. It will be awesome to play in my first Major," she said.

This was Koivisto’s second professional victory after the 2020 Amundi Czech Ladies Challenge on the LET Access Series.

Pia Babnik, the defending champion, also fired a 66 and tied for fifth place with Carmen Alonso on two-under-par.

Amateur Örtengren storms to win in her homeland

The local sensation was the only player today to sign for a red number as she carded three straight birdies on holes 14 to 16 at Tegelberga Golf Club to see her card a three-under-par 68, with her six birdies today the most by an amateur in any round.

After firing the round of the day, the 17-year-old waited for the final groups to make their way to the clubhouse as she saw the gap to the leader continue to get smaller.

“It was first when I signed the scorecard that I realised I was in second place at that point. I was quite nervous waiting around and checking the scores, but back out on the course I managed to calm down.”

Örtengren has a lot of success to her name over the years including 2021 wins at the German Girls Open, the Annika Invitational Europe in Sweden and the AJGA's Tournament of Champions in the US, with this the latest trophy to add to her collection.

“This means a lot to me, it meant winning at a level that I haven't won at before. My goal is to keep playing well, hope for some invitations to big events and hopefully qualify for a major or two.”

Bontan stormed ahead of the opposition after shooting two-under for her front nine, before four bogeys on the way home saw her drop level with Örtengren tying on two-under-par overall.

And the Dutch couldn't regain her form from the early part of the day in the play-off, as the Swedish superstar edged her out to claim success, but she was delighted with her week nonetheless.

Finland’s Karina Kukkonen took solo third place two shots back at even par after shooting six-over-par 77 in the final round.  Individual fourth spot went to Moa Folke of Sweden who finished on a total of two-over-par. One shot back was compatriot, amateur Ellen Andersson who carded a round of even par – the second-best score of the day.

Bontan makes the move up to third place in the LETAS Order of Merit standings after her strong showing in Sweden, leaving her on 439.50 points after the three events of the season so far, while Italy's Lucrezia Colombotto Rosso continues to lead the way on 534.00.

The next LET Access Series event is the Amundi Czech Ladies Challenge from June 3-5.