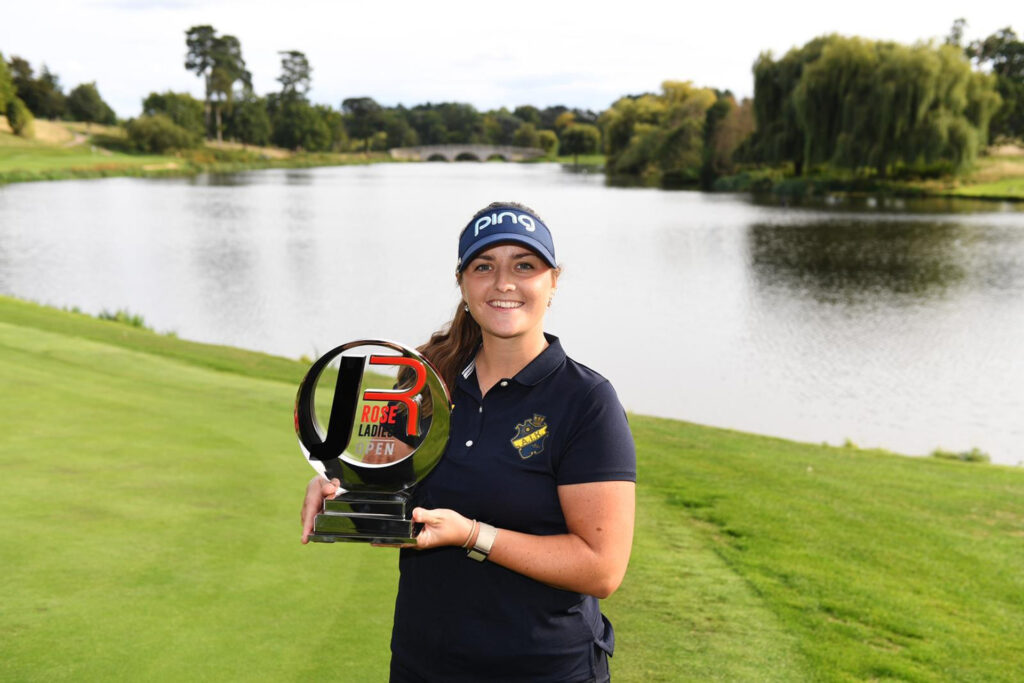 Editor Emma Ballard took a trip south on Sunday to watch the final round of the inaugural Rose Ladies Open at Brocket Hall, Hertfordshire.

The new event on the LET Access Series (LETAS) marked a step up in the efforts of Justin and Kate Rose, and their partners, to support the women’s professional game. Ahead of the event, Justin told us:

“We do have a growth mindset with it all. Who knows where that takes us but we are enjoying the whole Rose Golf platform with everything from the Junior Academy to the Daily Telegraph championship to the Rose Ladies Series. Now, this event continues that journey for young aspiring players to move their way towards the top of the game.”

The Melbourne course was bathed in sunshine for the start of the final day. The leader heading into Sunday was Spain’s Noemi Jimenez Martin who took a two shot advantage at two-under-par.  The greens had proved tricky all week, so shooting low scores have been hard to come by.

For most of the day it seemed that the win would go to Jimenez Martin as she extended her lead to six shots at one point. However, the back nine and in particular the 16th proved to be her undoing and that of one of her closest challengers Sara Kouskova.  Kouskova was seeking out her third win of the season.

My Leander with a her first LETAS win

In the end, the day belonged to Sweden’s My Leander triumphed at the Rose Ladies Open after who had a phenomenal final round of four-under-par 68 to secure her maiden win on the LETAS.

After rounds of 72 and 73 on the first two days at The Melbourne Club at Brocket Hall, the 28-year-old champion started the third round three strokes behind the leader Jimenez Martin.

Although the Swede opened her round with a bogey on the first hole, she then made three consecutive birdies on holes two through four.

Another bogey on the fifth followed by four pars had her make the turn in 34 shots (-1), close enough to the top of the leaderboard.

“I started this round with a bogey so to be standing here with the trophy is quite surreal but I’m very happy. I knew I made some birdies, but I stopped counting them and just went on with knowing I was under par for the day."

Leander started her back nine with a birdie and bogey on holes 10 and 11, respectively, before taking charge in Hertfordshire with another birdie on the 13th hole.

A strong finish saw the champion climb all the way to the top of the leaderboard with back-to-back birdies on the final two holes.

“I kind of knew the birdie on 17th would make a difference and then I hit it close on the 18th and made the putt.

“I didn’t really know what the standings were and the first time I looked at the scoreboard was after we walked off the last green. Until then I really didn’t think I was all the way up there, so it was such a pleasant surprise for me.”

Second-round leader Noemi Jimenez Martin from Spain finished runner-up after a final round of two-over 74.

The Spaniard had a perfect start to day three in England, opening the round with three consecutive birdies and adding another one on the fifth before dropping one stroke on the ninth and making the turn in 32 shots.

A tougher back nine tested the 28-year-old who ended up carding three bogeys and one double-bogey to finish three shots behind the winner.

Three players tied for sixth as England’s Rochelle Morris, Germany’s Patricia Isabel Schmidt, and New Zealand’s Momoka Kobori were at +2 after the final round.

At a total score of three-over-par and rounding out the top ten with a share of ninth are Spain’s Piti Martinez Bernal, French amateur Nastasia Nadaud, Norway’s Tina Mazarino, and Austria’s Katharina Muehlbauer.

Support to continue from Justin and Kate Rose

Before Leander collected her trophy, Justin Rose spoke to the fans around the 18th green:

“We’ve really enjoyed this next stage, working and partnering with the LET Access Series. Hopefully, the journey will go from strength to strength, supporting the ladies on their journey to the top of the game.”

It’s certain that the event was a success and provides the perfect foundation to grow and establish the Rose Ladies Open as an integral part of the LETAS season. Giving the exposure that the women so richly deserve but also engaging golf fans in the UK, especially aspiring female professionals, by showcasing the huge talent on tour.

The LETAS calendar sees a week off before moving on with the Santander Golf Tour – Burgos from 6–8 October in Spain.