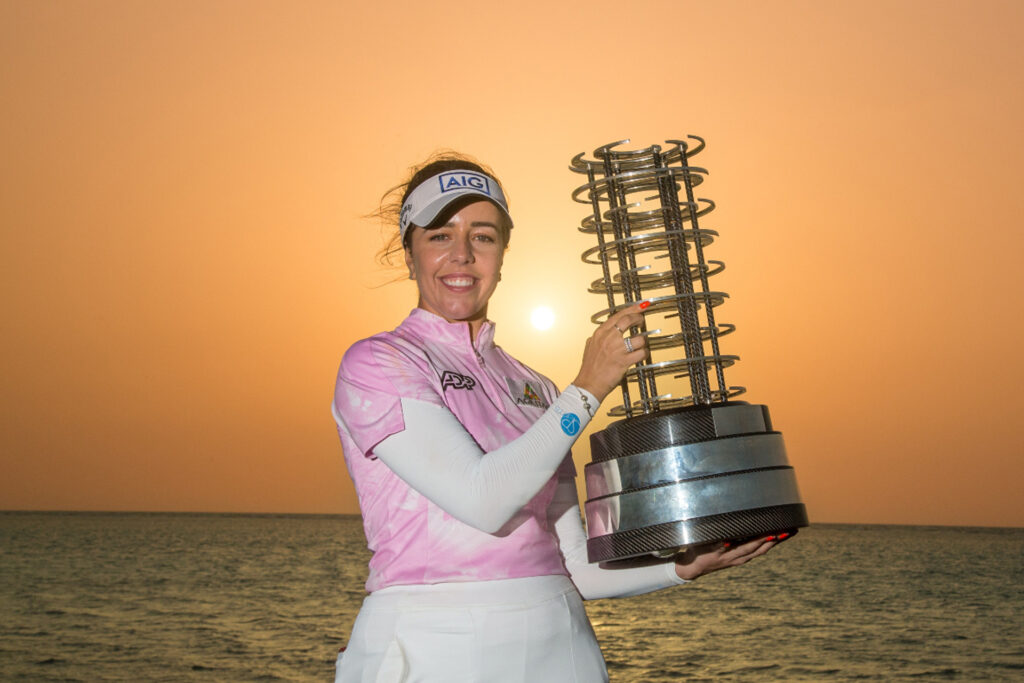 Aramco Saudi Ladies International to offer the biggest prize fund outside the majors on the Ladies European Tour. A five-fold increase sees parity with the men’s equivalent event.

The prize money for the Ladies European Tour’s Aramco Saudi Ladies International presented by PIF will undergo a significant five-fold increase next year from US$1m to US$5m.

The female golfers will now compete for equal prize money to the men in the PIF Saudi International powered by SoftBank Investment Advisers on the Asian Tour and the purse will be the third largest on the LET, offering a cheque for $750,000 USD to the tournament champion.

The increased prize money will start when the tournament takes place for the fourth consecutive year at Royal Greens Golf & Country Club in King Abdullah Economic City on February 16-19, 2023, as part of a renewed agreement between the LET and Golf Saudi.

The tournament will assemble a world class field of 120 competitors, comprising of the LET, the Rolex Women’s World Golf Rankings and sponsor invitations.

“The increased purse for the Aramco Saudi Ladies International presented by PIF is a landmark moment for our Tour, and for women’s sport globally,” said LET CEO Alexandra Armas.

“It will allow the tournament to grow in every way, from its purpose and impact on social change to the delivery of exceptional experiences for fans and for players at the event and in the community. This is a message to all young women that golf is for them, and they can pursue the sport as a passion and as a career.”

One million Saudis to have actively tried golf by 2030

Since the inaugural Aramco Saudi Ladies International in 2020, thousands of Saudi women and girls have taken to the fairways across the country and committed to learning golf, aligning with the Kingdom’s wider ambitions under Vision2030, which aims to get more Saudis regularly active. In fact, 1,000 young girls signed up to play the game within just four days of the launch of the Ladies First Club and by 2030, the intention is for over 1 million Saudis to have actively tried golf.

Golf Saudi is also working with EDGA to promote golf for all players with disabilities, regardless of their ability, and to ensure people with a disability are able to feel welcome and participate in golf in its many forms.

“After three successful years of the Aramco Saudi Ladies International, we are delighted to offer the women equal prize money to the men from 2023 as part of our ambitious plans to attract the world’s best players and inspire home grown talents.

“It’s hugely exciting to unveil a five-fold increase in the prize fund and this only highlights our desire to help to raise the profile of women’s golf further and give the players the rewards that they deserve. Golf Saudi is not only committed to providing life-changing prize funds for female golfers but also continuing to encourage females to get involved in the game of golf throughout the Kingdom.

“Since the first Aramco Saudi Ladies International – the Kingdom’s first ever professional women’s golf tournament – thousands of women across the country have registered to learn and play golf as part of the Ladies First Club.

“Showcasing the best female golfers in the world as role models is integral to the games growth and increasing participation numbers, as if females of the Kingdom can see it, they can be it. This is another important step on our journey to grow golf, and specifically women’s golf, throughout Saudi Arabia.”

Alongside Golf Saudi, title partner Aramco remains a committed supporter of women’s golf, elevating the profile of tournament, addressing gender equality and empowering females across the globe through golf, sport and business.

This really marks a significant moment for the LET, Saudi Arabia will now contribute at least $10 million in prize funds across the year. Have the LET become too reliant on this source of money or will this be a turning point which will bring other stakeholders in to back the tour and the players and invest in women's golf? There's no doubt that more long term investment is something that the tour and its players deserve.