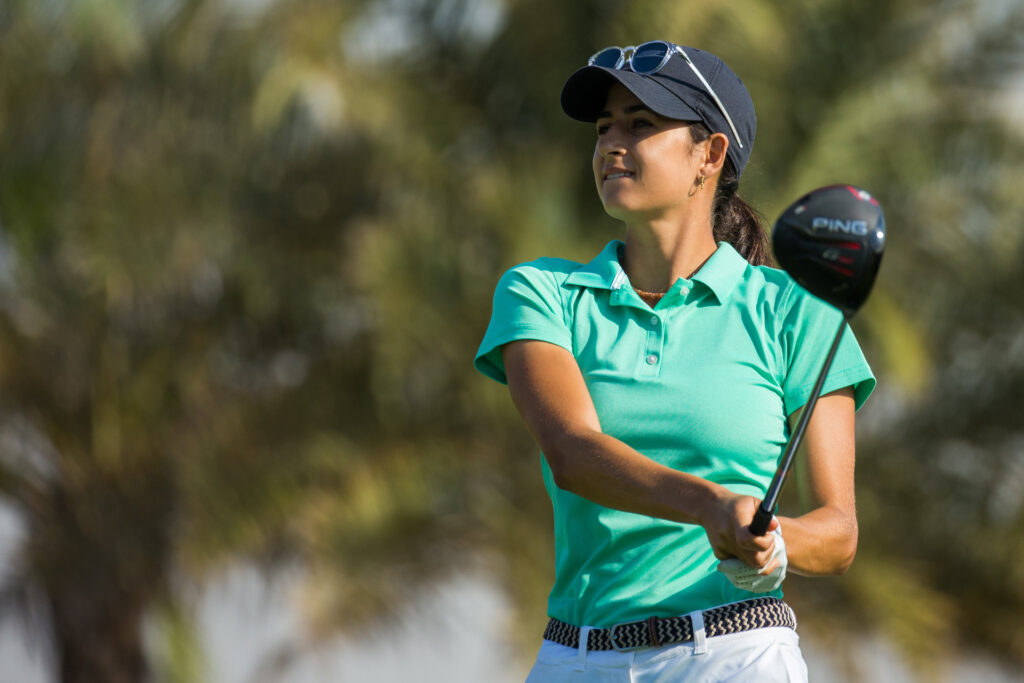 Ines Laklalech, from Casablanca, will make her professional debut at the Aramco Saudi Ladies International as the LET's second-ever professional Arabic golfer

Moroccan golfer, Ines Laklalech is counting down to what promises to be a “special” professional debut when she becomes only the second Arabic woman to compete as a full member on the Ladies European Tour at this week’s Aramco Saudi Ladies International presented by PIF.

The 24-year-old earned her 2022 Tour card in December despite just managing 15 amateur tournaments in a Covid-hit two-year spell as she sought to secure her place at women’s golf’s top table.

Now that she has achieved that dream, sport obsessed Laklalech is ready to make her mark in what will be her maiden event as a full professional this week at Royal Greens Golf & Country Club in King Abdullah Economic City, near Jeddah.

She also hopes to not only finish as high up the leaderboard as possible but to inspire the next generation of Arabic girls across the world, who she believes – like her – have greater opportunity than ever before to chase their own ambitions, wherever they may lay.

Back to the first LET event that she played in

“I’m so happy to be playing the Aramco Saudi Ladies International presented by PIF this week. I didn’t play in Kenya [the LET’s first event of 2022] so it’s my first tournament of the season.

“The Saudi Ladies International was actually the first LET event I played as an amateur back in 2020 – and I made the cut! So, this will be my second LET tournament, in the same place as the first, but this time as a professional.

“In 2020 it was a great, great tournament and experience, I loved it – particularly because it was in an Arab country, which to me made it even more special. This time I know what to expect a little more, and I’m very, very excited to play. The course is great, the windy conditions mean things can get very interesting and tough out there, so I’m excited.”

That debut Aramco Saudi Ladies International back in 2020 was a landmark moment for women’s sport within the Kingdom as it became the first-ever professional, international women’s sporting event to be held in Saudi Arabia.

Its impact was felt both country and worldwide, with more than 1,000 Saudi women and girls signing up to learn to play golf over the course of tournament weekend as part of Golf Saudi’s Ladies First Club free coaching initiative, with positive headlines printed on a global scale.

For a female Arabic golfer who grew up in this part of the world, Laklalech was acutely aware of that impact, feeling it directly.

“For me, the high-level golf always happened in the US and Europe,” she explained. “Now today, we’re seeing such a strong field of players playing in both the women’s and men’s events in Saudi Arabia. I would never have thought of competitive golf being played in Saudi Arabia before, especially a women’s event, knowing how things had been restricted in the past.  To see this now though is so good for the future of golf and for all women in the Arab world.

“The Saudi Ladies International shows Arab women that if they want to make a living out of their passion – be that in sport or anything else – they can, just as much as a man would. It shows that women can play competitive sports no matter what their background and no matter where they’re from.”

This week’s trip to the Kingdom will only be Laklalech’s third, having made the pilgrimage to Mecca with her family in 2011, before competing in 2020’s debut Saudi Ladies International.

Thriving in the unfamiliar is something the Moroccan is used to though, having first lifted a golf club aged ten in one of the few places in Casablanca “with a green field and lots of trees”, and quickly going on to join then beat the boys’ club – of which she was one of only two girl members – at her local course, aged only 12.

In her drive to make it to the Ladies European Tour, however, she has always had one shining light to look up to: the Tour’s first-ever Arabic player, fellow Moroccan and Saudi fan favourite, Maha Haddioui.

Maha was part of the recent adidas Golf campaign Our [Fair]way which was launched in time for International Women’s Day. The campaign profiles the stories of five remarkable women to show how every golfer has her own story and that all are beautiful in their own way.

The pair – plus fellow Moroccan youngster Lina Belmati – will all compete in Saudi Arabia this week.

“If you told me I’d be a professional golfer one day, I would’ve said ‘no way!’, because there wasn’t a lot of women playing the sport in Morocco. What Maha has done though was incredible for me, as the first Arab woman to ever make it to this level. Having someone from your country make it to the top makes the dream feel more real, as you can identify yourself more easily with that person. She has and continues to play an important and very inspiring role for Arab women and the people of Morocco, and now that I’m the second Arab woman on Tour, hopefully, there will be more after us.”

Laklalech excited for the season ahead

The 24-year-old will go up against Haddioui plus a number of the world’s best golfers, including the likes of Georgia Hall, Anna Nordqvist and Emily Kristine Pedersen. However, she goes into the event without fear.

“I’m excited to see what the next years hold for me. Anything new is exciting, and this elite golf is all new to me. My goals for this week and for the whole season are just to keep on learning every single day, and take as much experience as I can. I’m expecting a lot of highs and lows and I just want to enjoy every part of. I’ll just aim to do my best every single shot and have no regrets.”