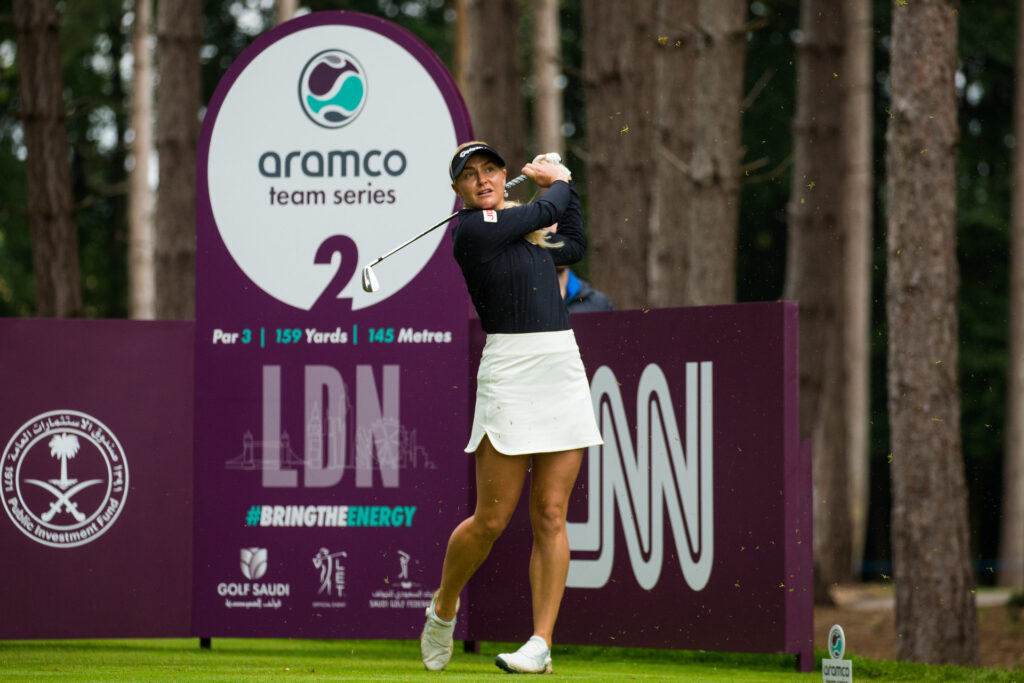 Georgia Hall, Charley Hull and Bronte Law have all confirmed that they will be playing the Aramco Team Series – London next month.

Three of the UK's biggest golf stars have been confirmed for the Aramco Team Series - London, taking place at Centurion Club on June 16-18.

Georgia Hall, Charley Hull and Bronte Law, all part of victorious Solheim Cup campaigns in recent years, will headline the $1m Aramco-backed team and individual event that returns to London for a second successive year on the Ladies European Tour (LET).

Last year’s debut event saw some of the biggest names in women’s golf compete, including Lexi Thompson, Atthaya Thitikul and other stars from the LET.

Tickets for the ATS in London are now available from just £5, with tickets for all three days on sale at £10.

Number one-ranked British player Georgia Hall had a strong start to 2022 with a commanding victory at the Aramco Saudi Ladies International in March, also spending time on the LPGA. Last year’s ATS – London event saw Hall shoot 64 to break the course record in her second round.

“Any time you get to tee it up on home soil it’s very special indeed, so an opportunity to win individually or with my team in London at the Aramco Team Series is something that would obviously be a massive season highlight,” said Hall.

“I love the concept and a chance to play and win with a range of different players with some good memories from last year. Women’s sport and UK golf is booming at the moment, so fun and exciting events like this on the LET provide a massive opportunity for more women and girls to get inspired to play.”

Charley Hull, ranked 31st in the world and second in England, behind Hall, has enjoyed two top 10 finishes this season and returns to the ATS after a stellar 2021 where she had finishes of 3rd, 4th, 1st and 13th in the individual events.

This season’s ATS will also see a revised format for the event with the team event taking place over the first two days, and the third and final round for individuals making the cut in a last day shootout.

“I’ve performed well individually at the Aramco Team Series events, so I think this new format suits me,” said Hull, who played in the first 2022 ATS event in Bangkok. “It’s an exciting way to start a big summer for us with events the players all look forward to in terms of profile, fun and great prize money opportunities.”

“With a world-class field and affordable tickets, our London tournament can inspire golf fans and newcomers to the sport. We’re committed to supporting players and empowering women and girls through golf at all levels - leaving a positive impact at every country the Aramco Team Series visits.”

First team event of its kind

The Aramco Team Series is golf’s first team event series on any professional tour – with visits this season to Bangkok, London, Sotogrande, New York and Jeddah. The format, which includes a player-led draft at each event, gives more golfers tournament opportunities helped by teaming up with the best players on the planet. The teams will feature three LET players and an amateur fourth member – a position open to all golfers in the UK for the Aramco Team Series – London through the tournament’s “Team Up” competition, in association with VPAR.

For more information on attending and tickets, visit aramcoteamseries.com or follow the event on social media @aramco_series