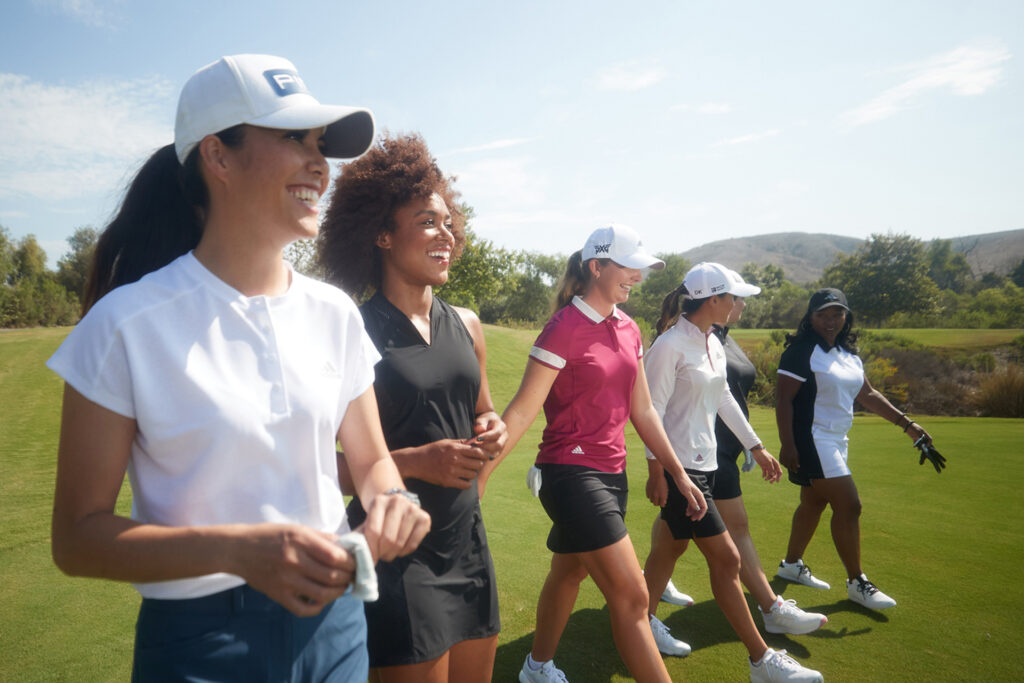 With a continued effort to make the impossible possible for women and girls, adidas have launched a new series called Our [Fair]way that focuses on women in golf.

As you know, golf is primarily an individual sport. Every time someone steps on the course it’s a different experience, a different approach. According to the National Golf Foundation, 25 per cent of those that play golf in the U.S. are women, a figure that’s been rising steadily over the past five years. With a trend in more participation among women around the world, adidas Golf wanted to highlight some of the powerful women in the sport who are part of the driving force behind inviting women everywhere to play golf.

This collection of features – Our [Fair]way – profiles the stories of five remarkable women to show how every golfer has her own story and that all are beautiful in their own way.

Our [Fair]way was developed and produced entirely by women, both employees within adidas' golf category as well as an all-female production crew.

The five women featured as part of the series offer a glimpse into how golf has impacted each of them personally along with the positive force that the sport can be for all women:

Before Danielle Kang (@daniellekang) found the sport of golf, she was a second-degree black belt in Tae kwon do. At the age of 14, and only just a year and half after picking up a club, she qualified for the U.S. Women’s Open. She went on to win the U.S. Women’s Amateur in 2010 and 2011, joining just a handful of women to win the event multiple times and in consecutive years. Her first major championship victory came at the 2017 KPMG Women’s PGA Championship, and with her six wins as a professional, has climbed as high as no. 2 in the world rankings. Her competitive nature drives her to be better every day.

Tania Tare (@taniatare63) has shown us all an entirely new way to hit a golf ball. Her amazing skills and athleticism are on full display in her trick shot videos that inspire creativity and are seen by people all over the world. She reminds us that golf is and should always be fun, and to challenge ourselves to see the sport through a different lens.

For Tiffany Mack Fitzgerald (@blackgirlsgolf), golf provided a way to build better relationships in business, all through a sport that could be played by all. As a beginner to golf, she wanted to learn the rules so that she felt comfortable playing with those she interacted with. For her, she saw this as an opportunity to invite other women to learn along with her. What that, Black Girls Golf was born and a sisterhood was forged. Now with over 4,000 members nationwide, Black Girls Golf continues to provide a way for women to learn the sport and develop relationships while having fun along the way.

Troy Mullins (@troycmullins) is both power and poise in every step. Before playing golf, Mullins was a track and field heptathlete competing at Cornell University. A hamstring injury led her to pick up a club, and before long, she was already entered in the World Long Drive Championship. She went on to win her first Women’s Long Drive event in 2017 and became a regular mainstay on the women’s professional circuit.

Maha Haddioui (@mahahaddioui) is a trailblazer. Her story is one that has inspired an entire generation of girls and young women to start playing golf. Maha's legacy is that she will always be known as the first Arab woman to compete professionally in women’s golf, currently playing on the Ladies European Tour. Her competitive nature pushes her forward and she continues to be an example to all women who are starting to play golf in the Middle East.

Our [Fair]way will be introduced through the @adidasgolf social channels from today and leading up to International Women’s Day on March 8. adidas Golf, not only support women like these who are shaping the future of golf for women everywhere, they're constantly pushing themselves to create better products for women; whether that be through more inclusive sizing or with specific styles that transition both on and off the course.

Watch this space for more over the coming weeks.

Keep up to date with the Our [Fair]way campaign via @adidasgolf social media channels.