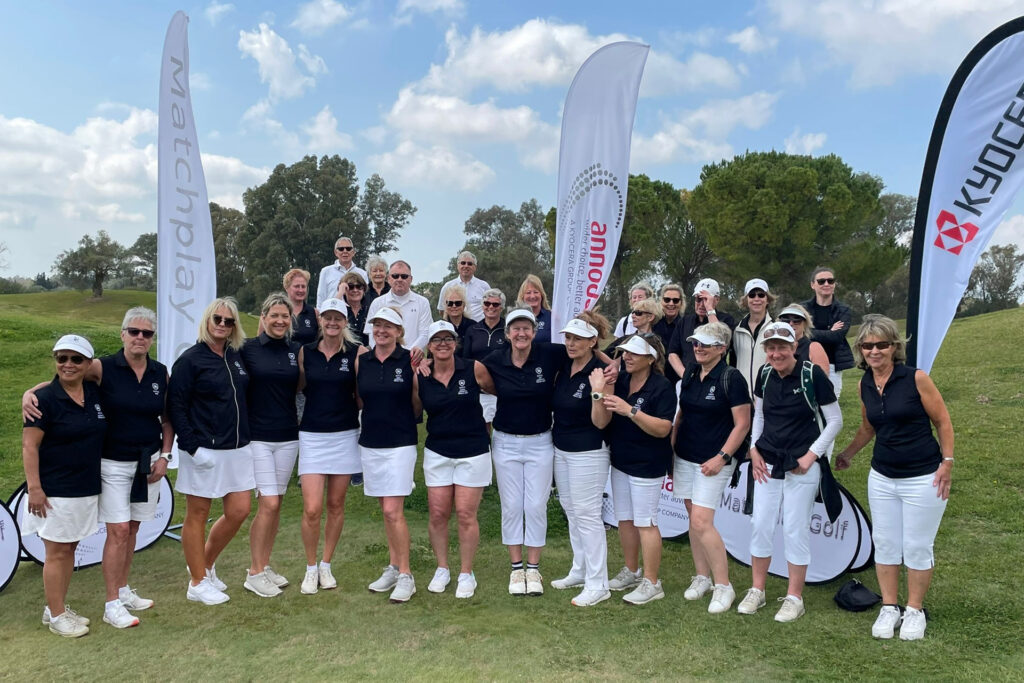 “Our ladies are a highly competitive bunch, who will do their very best to come back to Kent victorious!”

Their very best was indeed good enough as they were crowned champions! Here’s a report direct from Nizels themselves, on their journey to the final and how they held their nerves to take home the trophy.

A team of five ladies battled through six knock-out rounds to reach the final of the Annodata Matchplay Competition at Montecastillo Golf Resort in Jerez, Spain. It was a journey that began in May 2021 and after a first round bye, they beat Knole Park Golf Club, two teams from Canterbury Golf Club, Dartford Golf Club, Royal Ashdown Forest Golf Club and Sonning Golf Club to reach the finals.

“This competition is all about finding the best ladies golf club in the UK. From the start, I wanted to play my best team available from a squad of 10 of our best lady players at Nizels. I felt that this would give us our best chance to get through.”

The Montecastillo course was challenging but did not deter the Nizels team. The adrenalin levels were high for the semi-final against Leigh Golf Club. Adele Young from Nizels had the honour of the first shot. All five matches were hard-fought and after nine holes, the win could not be predicted. However, Janette Withey, playing number four, came in first with a great 7&5 win. This was followed by a win to Adele on the 17th. Pat Morecroft, playing number two, was 1 down going down 17th and finished all square. With only a half required to secure a place in the final, number five Gina Phillips guaranteed this by being 2up with two to play.

The final was played against Charnwood Forest Golf Club, with a range of handicaps, the shots given by Nizels ranged from zero to 12. Nizels fielded the same team, in the same order as the semi-final. As a number of shots had to be given, the Nizels team played with great concentration and their approach shots and play around the greens was superb.

After nine holes, Nizels were 1up in one match and all square in two. It felt like it could go either way. After 12 holes, Nizels were up in three matches and still AS in two. The first win went to Pat Morecroft on the par three 14th. The second win to Adele came on 16th. At the 18th, Carol Turl, playing at number three was 1up going down the 18th. Carol played a great putt just off the green to secure her win 2up. At the same time, Janette had also won her match 3&1 and Gina was 2up going down 17th, so did not need to finish.

The Nizels team were very impressed with the team from Charnwood Forest Golf Club and passed on their congratulations for making the final. Made all the more impressive by the fact that Charnwood Forest is a nine-hole course and has a small ladies section compared to Nizels, which boasts one of the largest in Kent.

An emotional rollercoaster for team Nizels

Janette Withey who played at number four in the team said:

“Having the privilege to represent Nizels has been an absolute honour and being able to play my part in bringing back the trophy is a dream come true.  Throughout the whole experience my emotions have been put through the wringer - adrenalin fuelled golf, uncontrollable shaking, tears, laughter and an overwhelming feeling of support which Nikki, my caddy managed to control throughout.

“The bonds formed within the team, the wider squad, our inspirational Captains, and our incredible supporters will leave its legacy with wonderful memories to treasure.”

Shirley Spencer, the Lady Captain of Nizels, was one of the supporters who accompanied the team and followed the matches, added:

“It was such a privilege to watch the girls play and it was great entertainment – their determination to win was simply inspiring. The kindred spirit and camaraderie shared between the teams was evident to see, especially when I heard a caddy from the opposing team actually say they have never enjoyed a match so much as with Janette and Nikki from the Nizels.

“And who says the game of golf needs to be stuffy and old hat - the girls certainly take their golf seriously but they also know how to party and this ultimately, can only make the game more popular.  You only have to watch the Solheim Cup to see that the women bring the game of golf to a wider audience”.