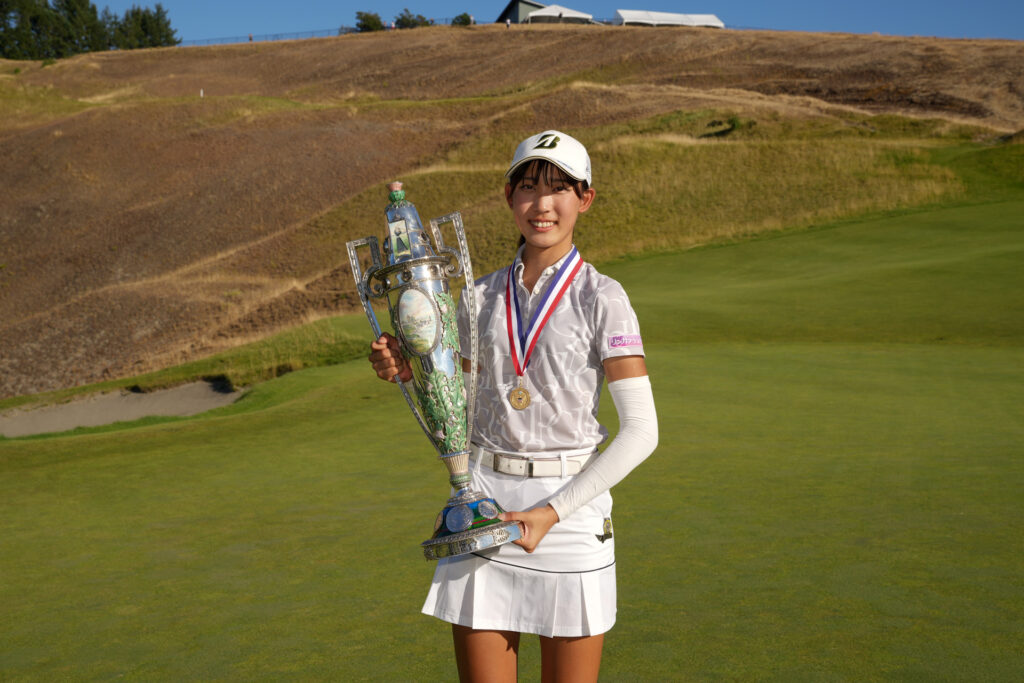 The 17-year-old from Japan defeated 21-year-old Monet Chun of Canada, 11 and 9, on a chamber of commerce day at Chambers Bay. With the victory, Baba becomes just the second player from Japan to win a USGA championship, after Michiko Hattori won this title in 1985.

“It’s just amazing. I just can't believe it,” said an emotional Baba through a translator. “I was able to [play] my kind of golf. Yeah, everything just went smoothly.”

Baba’s kind of golf was very effective at Chambers Bay. She won the first hole with a par after Chun, a junior at the University of Michigan, hit into the dunes to the right and struggled to get back into play. After the two finalists tied the second hole with birdies, Baba won the next three in a row to build a 4-up lead that quickly felt much larger.

Baba, who relentlessly hits fairways and greens and seems to make just about every putt inside 10 feet, increased her lead to 5 up through eight holes. Chun, a steady player in her own right, was not able to mount a sustained comeback even when she hit quality shots.

“Honestly, I was trying to match it up, but it was pretty amazing just to watch,” said Chun. “She was going for every pin, making every putt, and that's hard to match up.

A prime example was the scenic, downhill par-4 14th hole. After both players split the fairway with their drives, Chun, who was 6 down at the time, played first and hit her approach to 15 feet. Baba, unfazed, struck a near-perfect iron shot that nestled just 7 feet from the hole. Chun missed her birdie, Baba made hers, and the lead was 7 up, which was where it stood at the midway point of the 36-hole final.

During a lengthy break for lunch and warm-up, Baba received ice and heat treatment for her lower back. She held her lower-left back as she walked off two teeing grounds just after the start of the second 18. Perhaps sensing an opportunity, Chun rolled in a birdie putt on the par-4 second hole and won the par-3 third with a par to trim Baba’s lead to 5 up.

“If she made a mistake, lost a hole, it woke her up and she bounced right back,” said Beau Brushert, the Chambers Bay caddie who had Baba bag’s this week. “She didn't let it get her down. She's amazing. She's a lot of fun to watch.”

The par-5 fourth hole proved to be a turning point. Chun, playing first, hit a wedge approach to 6 feet behind the hole. Baba was just in front of the green in two but faced a difficult path to get her ball close. She played an exquisite high pitch that rolled up 7 feet below the hole. Showing the feel for the greens that helped her defeat five previous opponents, Baba rolled in the birdie putt to put the pressure on Chun, who missed. What looked like a hole that could have gone Chun’s way instead went for Baba, and the historic rout was back on.

Baba won the next four holes, three of them with birdies, to cap off the final margin of victory and put herself into the USGA annals as one of the most dominant victors in championship history.