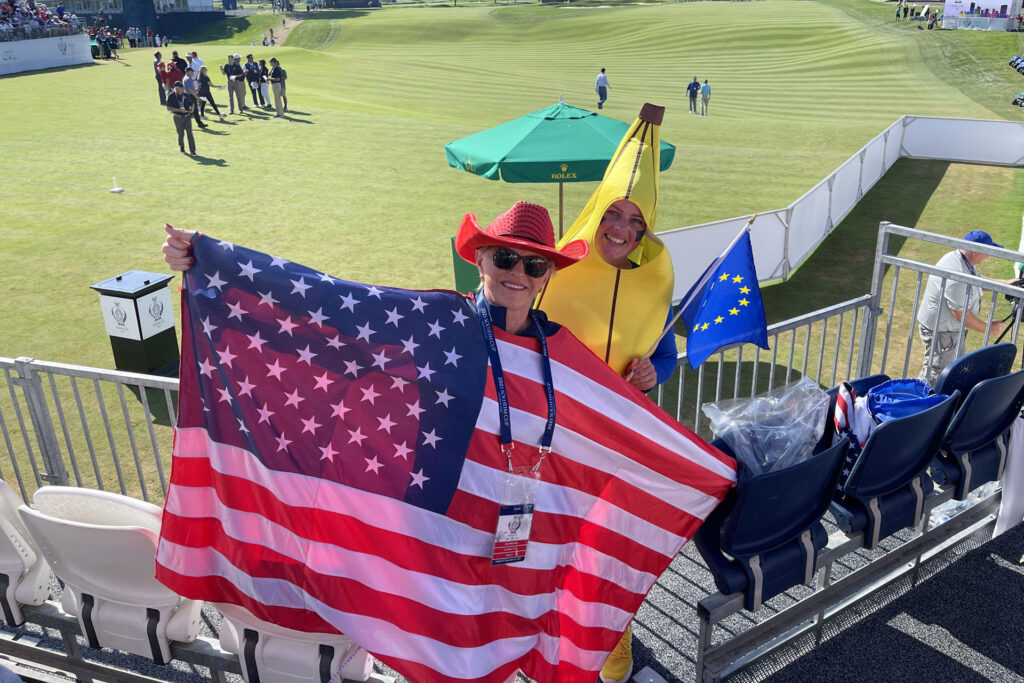 We hear from Barbara Gutstadt, a team USA super fan who is always on hand to make sure everyone has a great time at the Solheim Cup

Whether the Solheim Cup is in Europe or the USA, there are always dedicated fans dressed in their team colours, flags flying and raising their voices. This year was no exception in Toledo, Ohio, the only difference being that it was the red, white and blue of team USA that filled the stands due to the travel restrictions on European travel.

One American fan, in particular, stands out from the crowd and under normal circumstances would be making sure that the team USA fans are singing the loudest on the first tee. A Solheim Cup superfan but also someone who is making sure that her travel clients are having the best experience at one of the most popular events in the golfing calendar. Her normal attire involves wearing a mask, which feels quite mysterious, so here we unmask the masked Solheim Cup superfan!

The woman behind the mask

An enthusiastic and adventurous golf traveller, Barbara Gutstadt and her company Women's Golf and Travel Concierge have hosted groups to major golf destinations around the world. This also includes successfully planned and executed package excursions to multiple Solheim Cups.

As a long-standing member of the LPGA Amateurs Golf Association of Charlotte and Fort Lauderdale, this year she teamed up with them to offer trips to Ohio.

Barbara was on-hand as “official mascot” to make sure that members of the LPGA Amateurs, their guests and fans had a great time. From her songs and cheers to her red, white and blue mohawk, patriotic striped overalls, and star-spangled face-paint and mask,  Barbara, along with her “twin” masked mascot,  were both front and centre with the crowds cheering on team USA at Inverness Club.

The “twins” also took to the course bringing smiles and laughter to fans and capturing photo memories. This is something that Barbara has done at multiple Solheim Cups and the following pictures definitely show how she feels about attending the biennial event.

The Solheim Cup is a must-see event

Barbara believes that every golfer should experience the Solheim Cup, she said:

“Whether you’re a guest or volunteer, every women golfer should experience the Solheim Cup at least once in their golfing lifetime.  It’s like attending the Olympics of Golf. I was tremendously excited about representing the LPGA Amateur Golf Association’s Solheim Cup travel packages. We offer the best way to immerse our travelling guests to fully enjoy this amazing golf competition.”

Proud Promoter for the 2023 Solheim Cup

It then comes as no surprise that Women’s Golf & Travel Concierge has now been named a “Proud Promoter” for the 2023 Solheim Cup in Costa del Sol, Spain.  Barbara added:

"We’re honoured to have this designation. I believe it signifies to travellers our credibility, reliability, and the efficiency of our company. This will be our fifth Solheim Cup escorting fans to the most prestigious professional women’s sporting events in the world. Finca Cortesin has a spectacular setting at a world-class resort and we’re anticipating a large fan base to cheer on team USA”