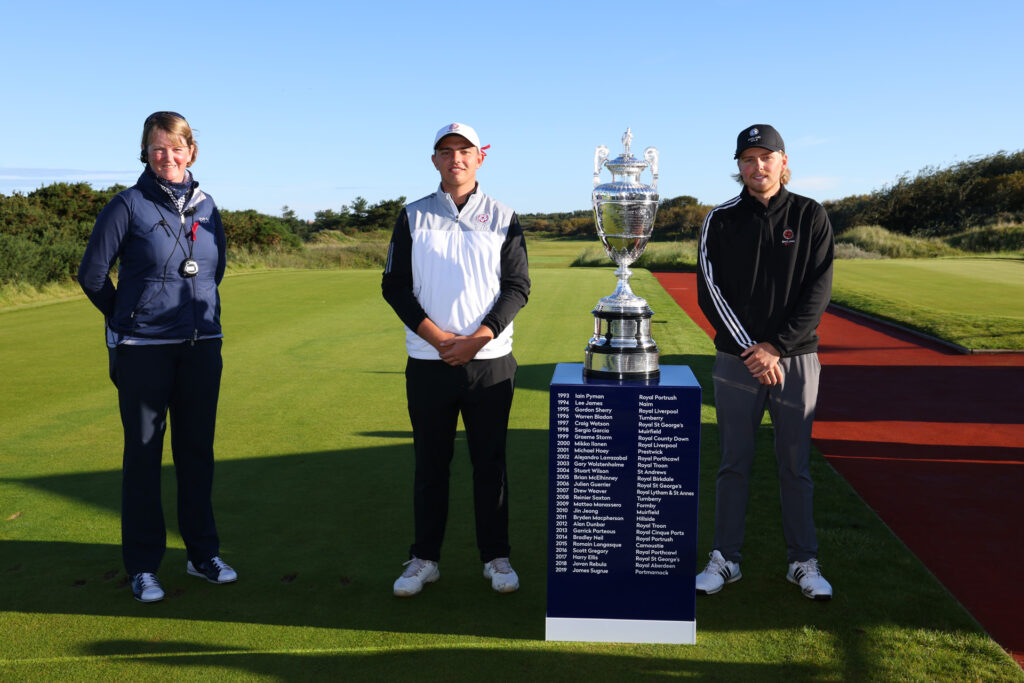 Editor Emma Ballard talks to Claire Hargan from The R&A about her career in golf, how she turned a passion into a profession.

Tell us a little bit about when you started playing golf and how you came to work in the golf industry.

From a work point of view, I got a degree in Mathematics and Statistics and went to work for Scottish Widows in Edinburgh as a trainee actuary. I did reasonably well with the actuarial exams to start with but when I was studying for my exams, I would reward myself by going and having a wee practice at the range. It was probably the most I practiced throughout my golfing career and so it was also the best golf I played during my amateur career but I stopped taking the actuarial exams before I got fully qualified, so I guess you could call me a failed actuary.

I stayed at Scottish Widows for about 10 years but I eventually got to the point where I wasn’t enjoying working in finance so I started looking for opportunities in golf. I applied for various different roles but wasn’t successful and in the end I decided to take a career break from Scottish Widows and handed in my notice.

Fortunately for me, within a few weeks, a job came up at the Scottish Ladies’ Golfing Association (SLGA), as it was then, as Championship Manager. I applied for that, having never run a golf tournament in my life, though of course I’d played in a lot of tournaments and I’d also managed various Scottish teams and had various other administrative roles with the County, but you don’t appreciate what goes into running events until you are involved in that side of things. I probably shouldn’t say that, but you do things in life and you get lucky, so I started with the SLGA in 2010.

It was whilst I was working for the SLGA that I got the opportunity to go to The R&A’s Tournament Administrators and Referees School. That’s when I started to really learn the details of the Rules. I remember trying to learn the Rules when I was a player. I started at Rule 1, but I have to admit I didn’t get too far. Hopefully the Rules modernisation project that culminated in the 2019 Rules have gone some way to simplifying the Rules and making them easier to read and understand for normal golfers.

Once I started working in golf, I had to read the Rules and understand them in detail. You also start to realise it's not just about learning the rules, it's about applying them, setting up the golf course, pace of play and everything else that goes with running events.

What’s involved in your role within the Rules Department?

It's a really diverse role. I'm quite heavily involved with the rules committee, where I help them through considerations for any rule changes and all that side of things. We're currently in the process of finalising the rules for 2023.

I work on the digital side of things  – including creating the rules of golf app and I oversee the translation process which involves around 40 national federations translating the Rules into their languages. We're currently in the process of working with third parties on creating a new rules of golf app for 2023.

We have our R&A Championships and other Amateur events that we are involved in and I’ll usually act as Chief Referee at one of two of those events each year.  For example, I’ll be Chief Referee at The Amateur Championship this year, as I was the last couple of years and at the Women’s World Amateur Team Championships (the Espirito Santo) in August.

Asides from The Open Championship and the AIG Women’s Open we also get the opportunity to guest referee at some other professional events, so I’ve had the chance to referee at the likes of the Solheim Cup at Gleneagles, the WGC-Dell Match Play in Texas, the US Open at Pebble Beach and the BMW PGA Championship at Wentworth.

As a Rules department we also look to help golfers and officials learn the Rules through The R&A’s three-tier Rules education system. The National Federations worldwide run level 1 and 2 seminars using The R&A’s education materials, but the Rules team at The R&A delivers the level 3 seminars, which is mainly focused on educating aspiring referees. We’re also currently piloting a fourth tier with some of the National Federations and that will put much more focus on the candidates gaining practical on-course experience.

How do you find male professionals react to you as a referee?

There are times when I’ve denied a player free relief and they have questioned it, but I expect they would do that with the majority of referees, especially ones that they aren’t familiar with. As long as you deliver the ruling with confidence and explain why they aren’t entitled to relief, the players tend to accept that you know what you’re talking about and accept the decision.

When it comes to gender, the Rules Department at The R&A has been pretty mixed for a long time. There have been women in fairly senior level positions within the Rules Department for over 20 years. When it comes to being involved with events, it’s definitely not based on gender, so you don’t necessarily see only women refereeing at the Women's Amateur Championships and vice versa. It more based around our schedules and who is available for each event.

Tell us a little bit about what’s coming in 2023

Next year is going to be a big step for the Rules of Golf because we’re no longer going to be printing two million copies of the Rules of Golf. Instead, golfers will be encouraged to use the Rules of Golf App to find out the information that they need. We’ll be focusing on providing more video content and developing the visual search to make it easier for golfers to understand the Rules and to find the answers they are looking for.

What advice would you give to someone looking to get into the rules side of golf?

I’d encourage them to work through the Rules Academy which is the online version of the Level 1 Rules education programme (https://www.randa.org/en/rulesacademy) and try out the Rules quiz questions on The R&A’s website or in the Rules App. Then, if you’re interested in progressing to Level 2, get in touch with your National Federation to let them know you are interested and to find out when their next seminar will be held. To set expectations, the Home Unions tend to hold their seminars during the winter months.