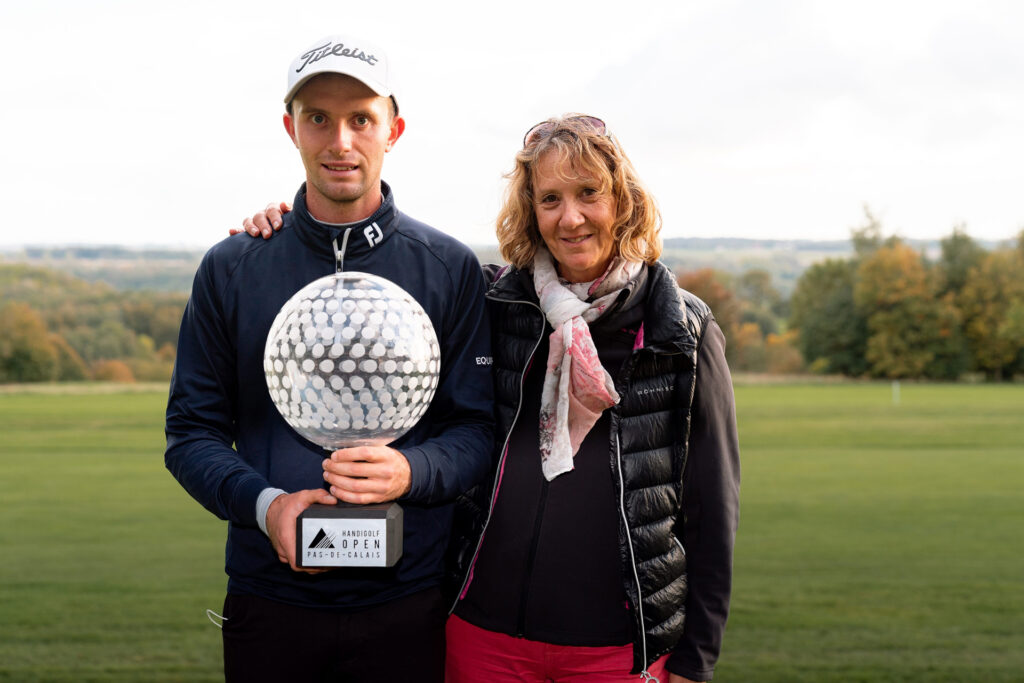 EDGA, the international body for disability golf, shares the story of Michele Helly and her son Vincent who was diagnosed with autism at three years old

Until Vincent Helly was six-years-old, he didn’t speak at all. In his early years, he lived in silence. His family faced severe anxiety with the pessimistic diagnoses of doctors at the time. Putting him in a psychiatric clinic was the view. If autism is often misunderstood today, there was far greater ignorance of the condition even 20 years ago.

This summer, at the age of 25, Vincent was representing his home venue of Golf de Moliets in the South of France. He teed off in two EDGA-European Tour Series events, in Scotland and England. Eight qualifying golfers with disability playing on the same day and same courses as star players from the European Tour, in front of appreciative spectators. Vincent qualified with a top-25 World Ranking for Golfers with Disability. He has a golf handicap of 2.

As a person with autism, it is not so easy to involve himself in the hustle and bustle of a big tournament day, with lots of unfamiliar people around, at an unfamiliar venue and in a different country listening to new dialects. Even hardened tour professionals have found adapting to golf in Covid-19 times stressful.

A diagnosis of deep autism

Helping Vincent to deal with all this pressure was his greatest ally, his Mum Michele.

Michele says: “The doctors told me that he will never go to school, that he will never speak. And he was three years old when he was diagnosed with deep autism, and I was told he must go to the psychiatric hospital and that’s all. So, I became his teacher.”

Michele has three sons, including Pierre and Paul.

“Vincent is the youngest one, the two older boys Pierre and Paul are not autistic but they said for us it’s not a problem if Vincent is autistic. He’s our brother, and we will try to help him but he must try to live a normal life, and that was fantastic.”

The boy who didn’t speak is now an excellent golfer, who also went on to succeed in school; Vincent recently graduated in accountancy at college. He says:

“My mother helps me to be good in social situations and golf is a great part of my life in my dealing with autism.”

Vincent spoke to us in his second language of English and the longer he spoke, the more relaxed and articulate he became.

He started playing golf only 10 years ago at 14, and his first experience of a golf swing was unusual. He laughs:

“I started to play golf with the Wii sports in the video game.”

Michele says: “He discovered golf and he said, Wow! That’s nice and I would like to try real golf, to play golf. And we went to the club where we lived in St Omer, near Calais, and then they said, OK Vincent you can try – and today they are very proud because his development is fantastic.”

Vincent’s impact in the EDGA events this summer was highly positive. He shared something significant with his fellow seven players who qualified and even the European Tour players around him: that he can play golf seriously well. He was thus taken in as one of the group which perhaps demonstrates something about the inclusive nature of this game.

"Sport is a fantastic vector of development"

Michele doesn’t say much about her role, but we saw her subtle but amazing support of her son at these tournaments, from encouraging him at social events, to making sure he is in the right place mentally for his round. Vincent has a long drive off the tee as an athletic young player and so her enthusiastic ball spotting was also highly impressive in the long rough of London Golf Club.

Michele says of her son: “He will be autistic all his life, that’s not a problem, but he can learn to live in our world but it’s difficult for him. It’s possible if other people help him and he makes progress. And sport is a fantastic vector of development.”

Vincent was fortunate as a five-year-old to attend a welcoming ‘baby gym’ which had a brilliant teacher taking the classes, while Vincent’s five-year-old classmates were friendly, Michele points out, as at that age children are kinder to those who are different.

Michele says: “If I was to send a message to the parents who have an autistic child, I would say never give up, because they can make progress, and Vincent is the best example.”

When Vincent isn’t practicing his golf he works as a volunteer for a society in France called ‘Golf Together for Autism’ (Golf Ensemble pour l’Autism) that helps autistic people and their families through golf. Vincent has an administrative role and also organises their golf days.

Michele says: “I think if people accept this difference it’s fantastic. It’s fantastic for the person who has autism but it’s very, very good for other people too.

“For Vincent, sport, and golf for 10 years is a real therapy… So I mean, if a person with autism has a passion, wow, this person can make progress, so I say never give up.”

Golf allows Vincent to forget he is different

Meanwhile, Vincent looks to the future, playing regularly at his beloved home club of Golf de Moliets. He says:

Despite his work ethic he tells us he also enjoys just being on a golf course.

“In golf we can enjoy the landscape too, and nature. I can travel in other countries and so I can discover other landscapes.”

Meanwhile, Michele says that when Vincent plays golf he forgets he is different and this is “magic, magic,” for him.

You can read more about Michele and Vincent and more inspiring stories from the EDGA players at www.edgagolf.com.

Words by Ben Evans from EDGA.

How to be greener on the greens

Can Infrared Technology improve your game?

Christmas gifts for golfers: For him