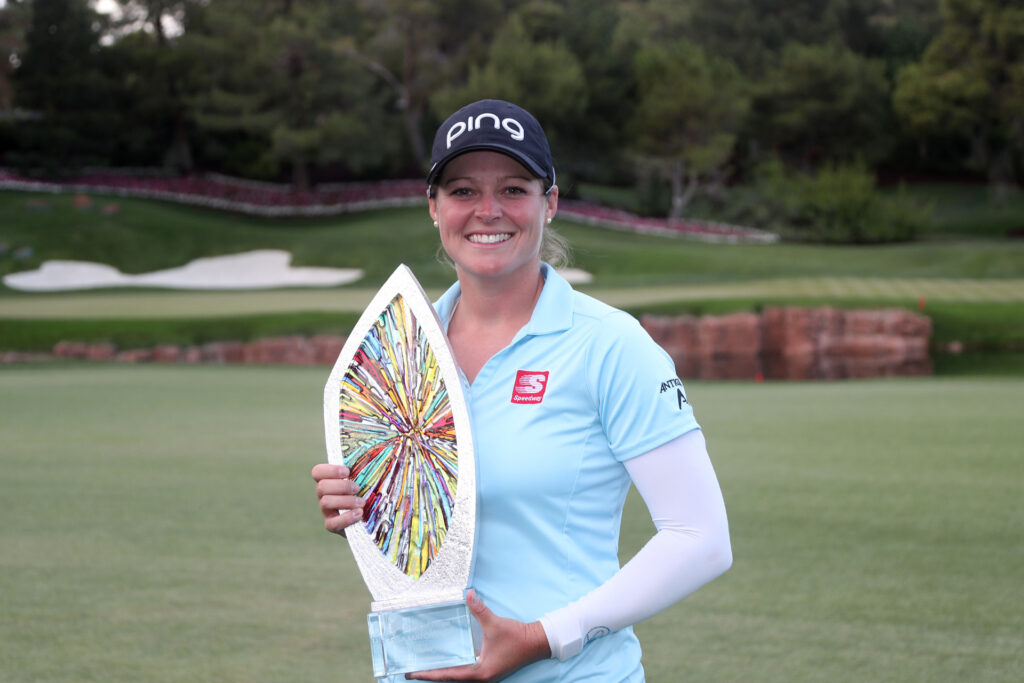 Talk on tour is turning towards Solheim Cup and Ryder Cup places as the race hots up to see who will make the USA and European teams.

Another busy week on golf's global tours where the LPGA Match-Play gave us our first taste of what may be to come at this year's Solheim Cup, plus Bernd Wiesberger and Jason Kokrak made strides forward to be automatically selected for their respective Ryder Cup teams. Here's what happened.

With a 3-foot putt on 17, American Ally Ewing won the inaugural Bank of Hope LPGA Match-Play Hosted by Shadow Creek, taking a 2-and-1 victory over Germany’s Sophia Popov for her second LPGA Tour title. Ewing and Popov played through blazing hot conditions, with temperatures all week in the upper 90s, wowing the small gallery of invited family and guests with a display of world-class golf on a similarly world-class layout at Shadow Creek.

Popov commented on the final round, she said:

“It was exhausting. I think I was limping in on the finish line really. Fatigue was definitely a factor.”

In advance of the final and afterwards, it was inevitable that talk would turn to the Solheim Cup. Popov was asked about whether she was excited about potentially playing in her first Solheim Cup, she said:

“100%. I love match play. It excites me. I think I have a feel for the putts that have to be made and the shots you have to hit in certain situations. You know, I'm hopefully not going to be as fatigued as I was this afternoon when I get there.”

Ewing will potentially feature in her second Solheim Cup, which she is obviously excited about, she said:

“It's super exciting to represent the United States. The first time was unbelievable. It was an unbelievable experience. Obviously losing makes you want to go back even more. So, yeah, playing it again would mean the world.

“Playing with Pat Hurst as the captain, I don't know what the team will shake out to be, but certainly know that the American team will be a loaded team, and, yeah, hopefully I'm fortunate enough to be on it.”

We now move into major week and the U.S. Women’s Open which is taking place at The Olympic Club in San Francisco.

The 18-year-old carded a final round of 72 at Golf Club Margara, in only her second LET event, to give her a one-shot win over Finland’s Ursula Wikstrom and England’s Gabriella Cowley, becoming the fist amateur to win the Ladies Italian Open.

Talking about her maiden victory, she said:

“After my putt on 17, I thought maybe I could do it and then with a par-five 18th I thought this is my time. I think my dad is happy, but he was more stressed than me. I saw him on the course, but I finally did it and I’m so happy. Thank you, dad, for supporting me. Thank you so much.”

As the final group made their way down the stretch, there was plenty of change at the top of the leaderboard but coming into the last two holes Cowley and Wikstrom headed the field before Malchirand’s birdie on 17 made it a three-way tie at the top.

A playoff seemed likely, but it was the teenage sensation, who was part of Team Europe at the 2019 PING Junior Solheim Cup, who rolled in a birdie putt from a few feet on 18 to take the top honours.

After winning twice on the Rose Ladies Series, her last win coming just nine days previously at The Berkshire, Cowely had her best-ever finish on the LET, she said:

“Right now, it’s hard to take it all in but tied for second is still a great week and I’ll take a lot from it. I’ve left putts short all day, I thought it was my time, but it wasn’t.”

Jason Kokrak posted a final-round of 70 to claim a two-shot victory over Jordan Spieth at the Charles Schwab Challenge. Playing in the final group together, they exchanged the lead on a number of occasions, but it was Kokrak who came out on top.

This is the American’s second win of the season, following his breakthrough PGA Tour victory at The CJ Cup in October, where he won on his 233rd attempt.

Kokrak was pleased to have a second victory, he commented:

“It feels really good to solidify that I'm not just a one-time winner on the PGA TOUR. Definitely is nice to get the second win, especially at an historic place like Colonial Country Club. Feels great. Looking forward to what's in store for the future, and you know, all I can do, and I tell everybody all I try to do is to get better every single year. It's not a flash in the pan. I'm a fairly consistent player. But I take one facet of the game and I try to elevate to the next level whether it's driving -- I've always been a pretty good driver of the golf ball.”

This week is the Memorial Tournament at Muirfield Village.

Bernd Wiesberger retained his title at the Made in HimmerLand by shooting a 7-under 64 to secure a wire-to-wire victory and win by five shots.

The 35-year-old became the first player to retain a European Tour title since Jon Rahm at the Open de España in 2019.

“It’s unbelievable. I’ve had seven chances (to defend a title) – I wasn’t successful the first six.

“I’ve said it all week, I really like it here. Playing here is good for my confidence especially after a couple of tougher weeks, so it’s a special place for me.

“It brings out the best in me. I got it going when I needed to so really enjoyable.”

Wiesberger took a one-shot lead over Alexander Bjork into the final round. There was no serious challenge on the day and the Austrian was able to pull away scoring six birdies in eight holes to finish on 21-under.

This victory means that Wiesberger is now in contention for a place on Padraig Harrington’s Ryder Cup Team.

The European Tour will be in Germany this week at the Porsche European Open at Green Eagle Golf Course.

Min Lee from Chinese Taipei shot a final round one-under to claim her third Symetra Tour victory at the Mission Inn Resort and Club Championship. Finishing on eight-under and one shot clear of Savannah Vilaubi and Laetitia Beck.

Talking about her victory Lee said:

“Everything just came up so fast. I didn’t even realize I was still leading until I finished my putt on No. 18.

“I am very happy I won the tournament, but I might feel it all a little later. To me, I really try to have fun out there and enjoy my life because you might now play well today, but it’s not going to kill you.”

Lee came into this week after making her first LPGA Tour cut at the Pure Silk Championship and finishing in T31.