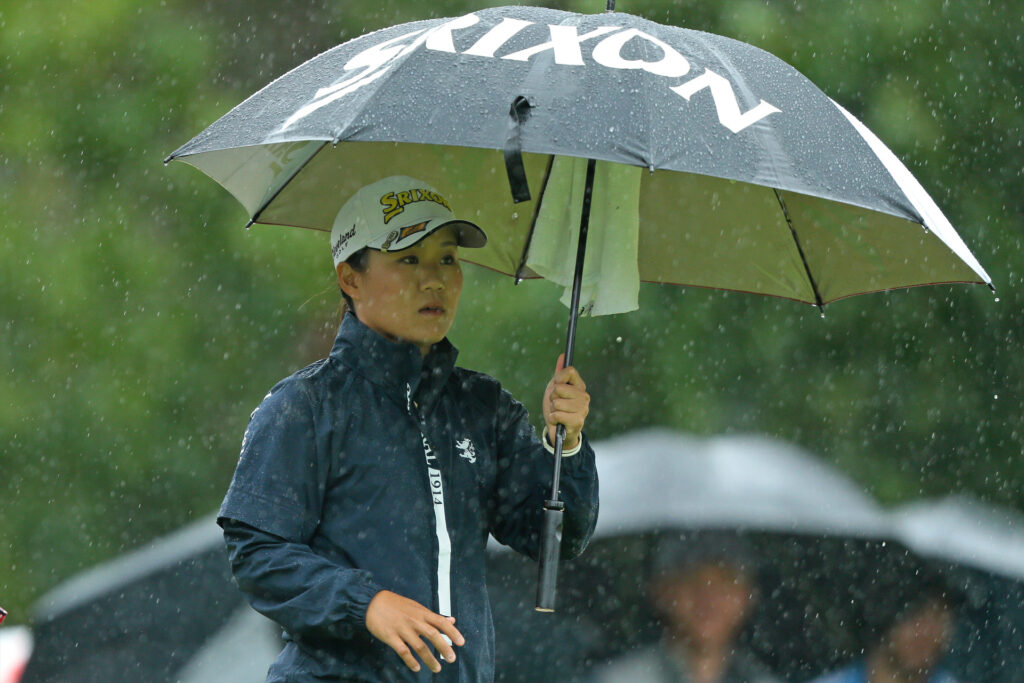 With everyone's attention now turning to The Open at Royal St. George's. We reflect on a rather damp week on tour.

Whilst Team Cowan were putting on a masterclass of approach shots at the Aramco Team Series - London at Centurion Club to eventually win at -41 and Marianne Skarpnord secured the individual title, it was a week where rain really interfered with play causing multiple delays, soft courses and a shortened event.

You can read about the Ladies European Tour Aramco Team Series - London here and we round-up the rest of the tour news below.

The 2021 Marathon LPGA Classic was shortened to 54 holes after a full day of rain left the course unplayable. Japan’s Nasa Hataoka, who held a six-stroke lead after three rounds, was named the winner, earning her fourth LPGA Tour victory.

“Knowing everybody is working really, really hard to try to get this to a 72-hole tournament. I wish it would've been able to do it, but with this weather it was really hard. I'm happy to be able to win.”

Americans Elizabeth Szokol and Mina Harigae tied for second at -13, with both players earning the best finishes of their LPGA Tour careers. Esther Henseleit of Germany finished solo fourth at -12, with Yuka Saso, Amy Yang, Austin Ernst and Caroline Masson tied for fifth at -11. Defending champion Danielle Kang tied for ninth at -10.

When Casey Danielson, the Stanford University alumna, won the Symetra Classic in Davidson, N.C. in May, all of it was a new experience. Now, battle-tested and eager to prove herself once again, Danielson carded a 3-under-par 68 in the final round of the Donald Ross Classic to capture her second Symetra Tour win.

Danielson ended the week on the Donald Ross Course at French Lick Resort with an overall score of -10 to claim victory by one. The performance comes after missing the cut in three of her last four starts. After hitting 17 greens in regulation in the final round, she said:

“With any golf career, there’s a lot of highs and lows. I definitely learned a lot from winning and got a little ahead of myself, I hate to admit it. Expectations came in and left my golf game a little bit of a mess because I wasn’t able to stay mentally present during a round.

“There were definitely some hard times out on the [Donald Ross] Course to stay present especially today being in contention, being in the final group. All the work I have been doing really paid off to combat it.”

Beth Wu earned her second runner-up result in six starts on the Symetra Tour this season, while 36-hole leader Rachel Rohanna signed for an even-par 71 on Saturday to finish solo third. UCLA alumna Lilia Vu fired a bogey-free 65 to reach -7 overall and share fourth with Amanda Doherty, rounding out the top-five competitors.

Whilst his sister Minjee was tackling the Centurion fairways at the Aramco Team Series - London, where her team finished 13th and she finished 11th in the individual event, Min Woo Lee was negotiating the links at The Renaissance Club in North Berwick.

Lee secured a second consecutive win for Australia on the European Tour when he birdied the first extra hole to win the abrdn Scottish Open after a play-off with Matt Fitzpatrick and Thomas Detry.

Lee, carded six successive birdies on the front nine, to finished with a final round 64. There was a 90-minute weather delay which saw him watch Djokovic win his sixth Wimbledon crown.

After his second European Tour win, the 22-year-old said:

"It was nice to see Djokovic come in and do his interview. I thought that was a good feeling and I might want to do that.

"It was an awesome day. I was pretty proud of the way I played and six birdies in a row was pretty sweet.

"It's crazy. I dreamed of it last night and to the people back home staying up late watching me and sending me messages, this one's for you too."

When play resumed, Lee birdied the par-five 16th but left a birdie putt at 18 short to win outright. He didn’t do the same when they returned to the 18th for the first play-off hole. Lee holed from nine feet to claim abrdn Scottish Open title and a spot in The Open championship this week.

Detry also secured a place in The Open, with England's Jack Senior claiming the final one on offer thanks to a tie for 10th.

In other news Australia's Wade Ormsby won 204 bottles of whisky for making a hole-in-one on the 12th, one bottle for each yard of the hole!

Glover wins for the first time in 10 years

Former US Open champion Lucas Glover won his first PGA Tour title in 10 years with a two-shot victory at the TPC John Deere Classic in Illinois.

This was Glover's fourth PGA Tour title, with his last coming at Quail Hollow in 2011.

The 41-year-old birdied five of the last seven holes to shoot a final-round 64 and finish on -19 to beat fellow Americans Ryan Moore and Kevin Na.

"I always thought I could do this again. I just needed to figure out the best way to go about it again.

"I've always worked hard and believed in it, but made some changes two or three years ago that I needed to do for more longevity. I want to play a few more years and try to keep going. It was just getting back refocused."

Six wins out of 11 starts

One final mention must go to Min-ji Park who is having an unbelievable season on the KLPGA tour. She won her sixth title from 11 starts this season. This is a phenomenal achievement!

Park won her sixth KLPGA title of the 2021 season at the inaugural Daebo hausD Open at Seowon Valley Country Club in Paju, Gyeonggi on Sunday.