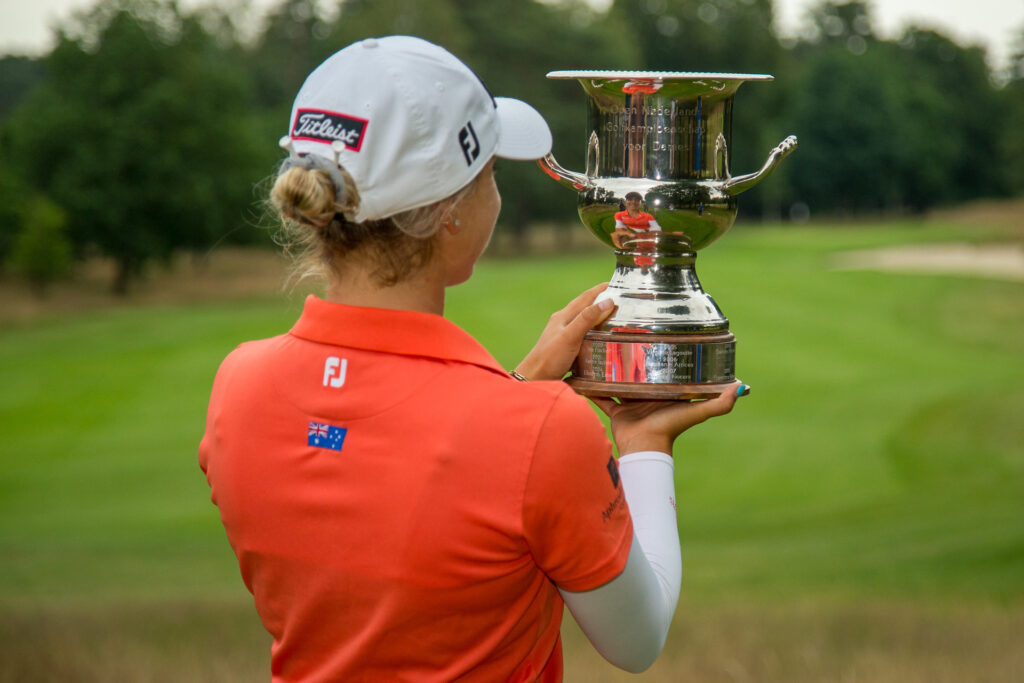 A weekend that was dominated on tour by the Australian's with wins on the Ladies European Tour, European Tour and PGA Tour.

World number one Ash Barty beat the Czech world number 64 Katerina Siniakova 6-3 7-5 on Centre Court to equal her best Wimbledon run to reach the fourth round. On his Tour de France debut, Ben O’Connor took his first stage win during a freezing cold stage on Sunday, he said:

“It’s life-changing for me. It’s a far-fetched dream when you come from Australia. To achieve this today is testimony to everyone who’s believed in me over the years. It’s so fulfilling and there’s so much joy. I’m loving every single moment.”

Completing that winning feeling were wire-to-wire victories for Stephanie Kyriacou on the Ladies European Tour and Lucas Herbert on the European Tour plus a maiden victory for Cam Davis on the PGA Tour.

What a weekend to be Aussie sports fan! Here’s a round-up of the week on tour.

Kyriacou claims first professional win with her dad on the bag

The 20-year-old rounded off an excellent week, which saw her card rounds of 66, 72, 65 and 67 to triumph with a score of 18-under-par at Rosendaelsche Golf Club.

The victory was also Kyriacou’s first as a professional having won the 2020 Geoff King Motors Australian Ladies Classic Bonville while still an amateur and she had her dad Nick on the bag with her.

After her win she spoke about having her dad caddying for her, she said:

“It is something pretty special. He has been there since day one. He spent all his time and energy when I was little so to have him on the bag for a win is pretty special. All my friends stayed up to watch my score! I’m very grateful for the support team I have.”

But it wasn’t straightforward for the Australian on the last hole, as she had to recover from some wayward shots to make par.

Finland’s Sanna Nuutinen carded a final round of 69 which included six birdies and three bogeys to finish in second place on 16-under-par. The Finn equalled her best-ever finish on the LET and thanks to her consistency in 2021, the result propelled her to the top of the Race to Costa del Sol rankings.

This week the LET returns to the UK for the first of the Aramco Team Series events. Find out who will be teeing it up in this unique team event here.

Herbert books his place in the Open

The 25-year-old began the final round with a one-shot lead over American Johannes Veerman and held off a charge from Sweden’s Rikard Karlberg.

Commenting on his win, he said:

“It's an unbelievable feeling. It's a bit fulfilling. I was probably at one of the low points in my life two years ago when I played at Lahinch in the Irish Open. I feel like I've done full swing and come back around and won the event. It's pretty satisfying.”

Herbert's victory sees him become just the third Australian winner of the Irish Open and will move him inside the world's top 60.

Off to Royal St. George’s

Herbert, Karlberg and Veerman will take their places at the famous Kent links after finishing as the leading three golfers not already exempt in the Dubai Duty Free Irish Open at Mount Juliet.

Marcel Schneider, who won the Kaskáda Golf Challenge in the Czech Republic, will also play in The Open after finishing as the leading golfer not already exempt in the Challenge Tour event.

In preparation for the challenge of the Open, the European players take on The Renaissance Club in North Berwick for the abrdn Scottish Open.

Cam Davis won his maiden PGA Tour title at the Rocket Mortgage Classic after defeating Troy Merrit on the fifth extra play-off hole. Joaquin Niemann was also in the play-off but was eliminated after a bogey at the first extra hole.

The 26-year-old Australian holed an impressive eagle on 17 and the followed with a birdie on the final hole to post a five-under 67 at Detroit Golf Club, tying with Niemann and Merritt at 18-under.

The players returned to the par-four 18th for the playoff, where Niemann, who had gone bogey-free throughout the 72 holes, make a bogey after failing to get up and down from the rough at the back of the green.

On his win, Davis said:

“It's still so surreal for me. I've been in some good positions before, but to play the golf that I played coming down the stretch was just awesome.”

The PGA Tour now moves to Illinois and the John Deere Classic at TPC Deere Run.

It wasn’t completely to be an Australian sweep this week. Jin Young Ko claimed her eighth LPGA Tour title at the Volunteers of America Classic. She carded a two-under-par 69 to win by one shot over Finland’s Matilda Castren.

It was a strong performance from the former World number one after she was replaced by Nelly Korda last week and the 25-year-old had her first win on the LPGA Tour with her parents in attendance.

She dedicated her win to her grandmother Soon Deok Jung who sadly passed away in March.

On holing her par winning putt on 18, she looked up to the sky. She explained in her press conference about why she had done this and how it was to have her parents there, she said:

“First of all, [looking] to God. And my grandmother passed away in March, but I could not go to Korea because quarantine so I couldn’t say bye,” said Ko. “It was emotional, but I wanted to say thank you to God and my grandmother.”

“Usually I feel a lot of pressure when my parents come to my tournament, so they didn’t come over for like the other tournaments. They know I get a lot of pressure when they come. This week, it is just 30 minutes from the course to my home so they had to come over. And I got pressure a little bit, but my father’s birthday was on Thursday so I wanted to play well and I played well, 8-under.

“My caddie [David Brooker] and his daughter stayed at my home all week, so I didn’t have pressure. Brooker and Brooker’s daughter are really funny, so they make me a lot of laughing at home. It was a great week and I want to say thanks to my parents.”

This week it's the Marathon LPGA Classic presented by Dana at Highland Meadows Golf Club in Sylvania Ohio.