Skarpnord's perfect timing for the return of the Ladies European Tour 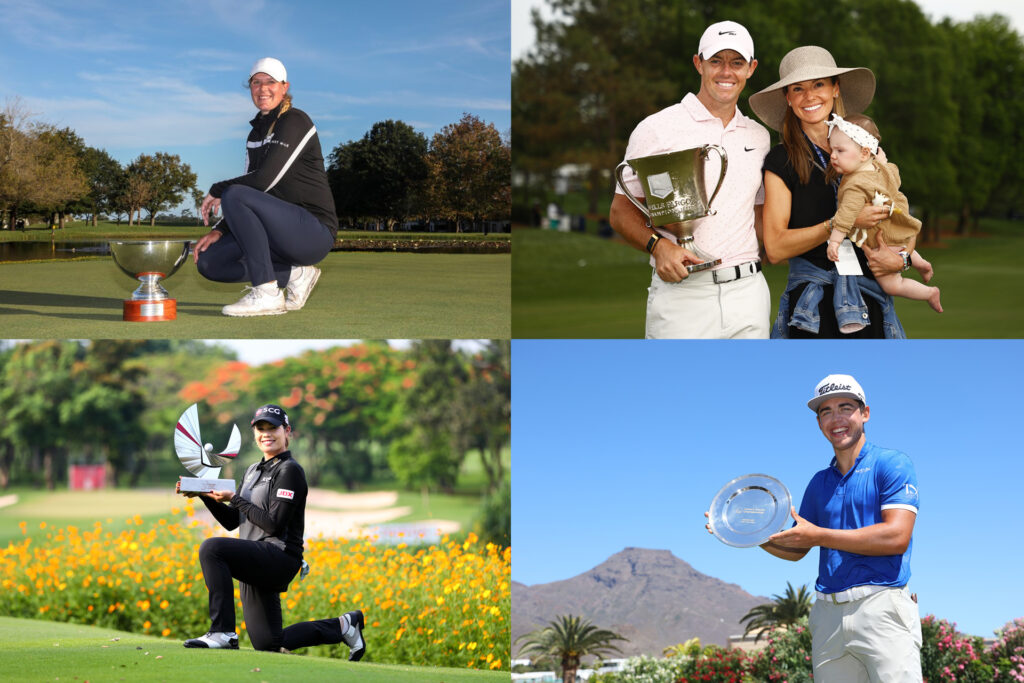 It was a big week for players returning to the winner's circle - some after two years, others just two weeks. Here's your weekly tour round-up.

Marianne Skarpnord came from seven shots back on the final day to win the Dimension Data Ladies Open after a four-way playoff at the Montagu Course at Fancourt on the Sunshine Ladies Tour.

Germany’s Olivia Cowan only had to make a seven on the final hole to win the trophy in regular play, however she unfortunately found the water with her third shot into the island green and ended up three putting for a triple bogey eight.

Commenting on the win, Skarpnord said:

“That was not even on the planet for me, to be honest.

“It was a surprise for me; for all of us really and it’s a shame that it happened this way. I would have loved to see Olivia win. She is a good golfer, but obviously she had a tough day. But her win it not far away. Obviously I am happy to be standing here, but it’s always a bit weird when it happens like that.”

The victory at Fancourt was the 35-year-old’s tenth professional title and her second on South African soil since she won the South African Women’s Open in 2013. It was also her first win since the Australian Ladies Classic in 2019.

“The last few weeks have been amazing. It’s absolutely fantastic to start the season this way. It was completely unexpected, but I couldn’t be happier. I haven’t won for a few years and this has been one of the best weeks on tour and I’ve been on tour for a long time,” said Skarpnord.

Skarpnord’s win is perfect timing ahead of the start of the Ladies European Tour (LET) season which starts this week at the Investec South African Women’s Open at Westlake Golf Club, the first event on the 2021 Race to Costa del Sol.

The event is co-sanctioned with the Sunshine Ladies Tour and will also serve as the U.S. Women’s Open qualifier this year.

The Race to Costa del Sol, which is the official LET ranking, offers a €250,000 bonus pool to the top three finishers. The Race begins in South Africa with the first of 28 LET tournaments spanning 20 countries in a record-breaking 2021 LET schedule and concludes with the Andalucía Costa del Sol Open de España in Spain in late November.

Last season’s inaugural Race was won by Denmark’s Emily Kristine Pedersen, who clinched the crown by an 834-point margin. Five wins, a further three top-ten finishes and a career-best major showing at the AIG Women’s Open (11th) from 12 starts proved Pedersen was in a league of her own during 2020.

“We are excited for the 2021 season to get underway in South Africa and to see who will be crowned the winner of the second edition of the Race to Costa del Sol. Last season Emily was a deserving winner of the inaugural title, thanks to her consistent performances throughout the year and her hard work was rewarded when she triumphed and claimed the crown. I would like to thank the Costa del Sol Tourist Board for their unwavering support over the past year and we are looking forward to the season ahead.”

It was a weekend of wins for players waiting for a win since 2019. In Thailand Ariya Jutanugarn secured her first win since the Ladies Scottish Open in 2019 and was the first Thai player to win the Honda LPGA Thailand since its inception in 2006.

Jutanugarn came from five shots back on the final day and birdied the 18th to shoot a low round 63 and win by one shot.

A popular winner who was visibly emotional after capturing her 11th career victory:

Jutanugarn becomes the first Thai player to win in her home country on the LPGA Tour, a moment not lost on the 25-year-old:

“It just feels so good, not only for Thai player to win, but I would say I have really tough time last two years.

“Every time when I look at all the kids, I want to give them inspiration. So I feel like you know what, don't give up. Do your best. Try harder. Keep trying. One day you will get it.”

The LPGA tour now takes a week off and returns with the Pure Silk Championship presented By Visit Williamsburg which was won by England’s Bronte Law the last time it was played in 2019.

Rory McIlroy made it a perfect Mother’s Day for his wife Erica as he came from two shots behind to win the Wells Fargo Championship at Quail Hollow for the third time and his 19th PGA Tour win. He also had not won since the WGC-HSBC Champions in November 2019.

He commented on how special the win was for him and his family and also credited the return of spectators in helping him to victory:

"Life has changed a lot for me now, being a dad and winning on Mother's Day, thinking of Erica and my mum back home.

"It's awesome to play in front of these people again. When we came back from the pandemic I thought I would enjoy the peace and quiet a little bit.

"I soon realised that to bring the best out of myself I need this and I feel all the energy so much. Maybe here more than anywhere else because it's the first place I've won three times. The crowd really carried me through today."

Garrick Higgo won for the second time in three weeks at the 2021 Canary Islands Championship with a six-shot victory at Golf Costa Adeje.

A third European Tour win in just his 26th event makes him the fastest South African to three wins not including Majors and World Golf Championships, and he also matches the record of Tiger Woods for the fewest number of events needed to claim three European/PGA Tour wins since 1990.

Talking about his win, Higgo said:

"It's unreal, I played so well today. I hit the ball very nicely so it was a lot less stressful than the last time because I was hitting it a lot better. I can't believe it happened so quickly again but my game has been good so I can believe it as well.

The European Tour now returns to the UK for the Betfred British Masters hosted by Danny Willett being held at The Belfry. Unfortunately, it will be behind closed doors ☹