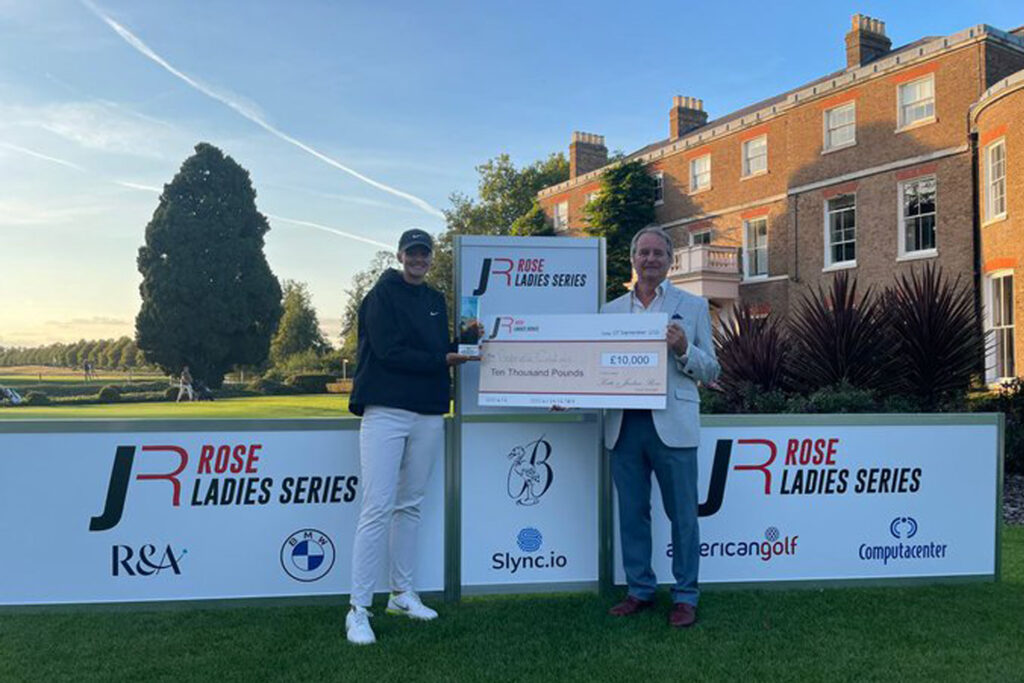 This year, when we've been attending the Rose Ladies Series, if you see that Gabriella Cowley is playing, you can be pretty sure that she is going to be somewhere near the top of the leaderboard. She stamped her authority on the 2021 Rose Ladies Series at the first event back in April at West Lancashire Golf Club where she won by one shot. Her second win came after an epic four-way play-off at The Berkshire, the fourth event of the season in May.

Ladies European Tour events were on her schedule in August, so it was a four-month break between her second win and teeing it up on Monday at North Hants. Unfortunately, it was her worst Rose Ladies Series finish of the season in a tie for 20th. So, we're sure that she had something to prove as she stood on the first tee at The Buckinghamshire on Thursday.

Taking on The Buckinghamshire

A prediction of four-under-par was made at the beginning of the day and it looks like Cowley was listening:

After six holes Cowley was level par after two birdies and two bogeys, she then managed to settle into her rhythm with birdies on eight, nine, ten and fifteen. She narrowly missed out on another birdie on 18 but was more than happy to settle for a four-under-par 68.

Her closest rivals could only manage to get within three shots with Sophie Stone, Lauren Horsford and Thalia Martin finishing tied on one-under-par.

The 25-year-old admitted that it hasn't been an easy season for her on the Ladies European Tour, so the Rose Ladies Series wins have become a big confidence booster, she said after her win:

"Win number three this year feels great it’s such a nice feeling being back playing on the Rose Series, and knowing the courses so well. It’s a big boost after starting the season so well.

"I played really solid today. Didn’t make many mistakes and hit it great off the tee. I’m looking forward to the weekend and will just be a fun day.

"It’s been a rough time out on the LET but hoping this pushes me on for the end of season and the final of the Rose Ladies Series."

Watch the highlights from The Buckinghamshire

There's just one event left of the Rose Ladies Series 2021 season. Bearwood Lakes will host 49 players on Saturday, all in with a chance of winning the £20,000 prize - an increase of £10,000 for the final event. Cowley and Monday's winner Liz Young are both eligible for the bonus Slync Slam prize of £50,000 which they will receive if they win - this is because they have won at least twice this season.

2021 Rose Ladies Series winners Becky Brewerton, Gemma Clews and Jae Bowers will also be playing. The only winning player that is absent is Women & Golf Tour Ambassador Gemma Dryburgh who is playing the NW Arkansas Championship on the LPGA.

We think Cowley sums up the approach to the final Rose Ladies Series event perfectly:

"I’m playing with Liz (Young) so I’m looking forward to that and just want to enjoy the day and whatever happens is a bonus."