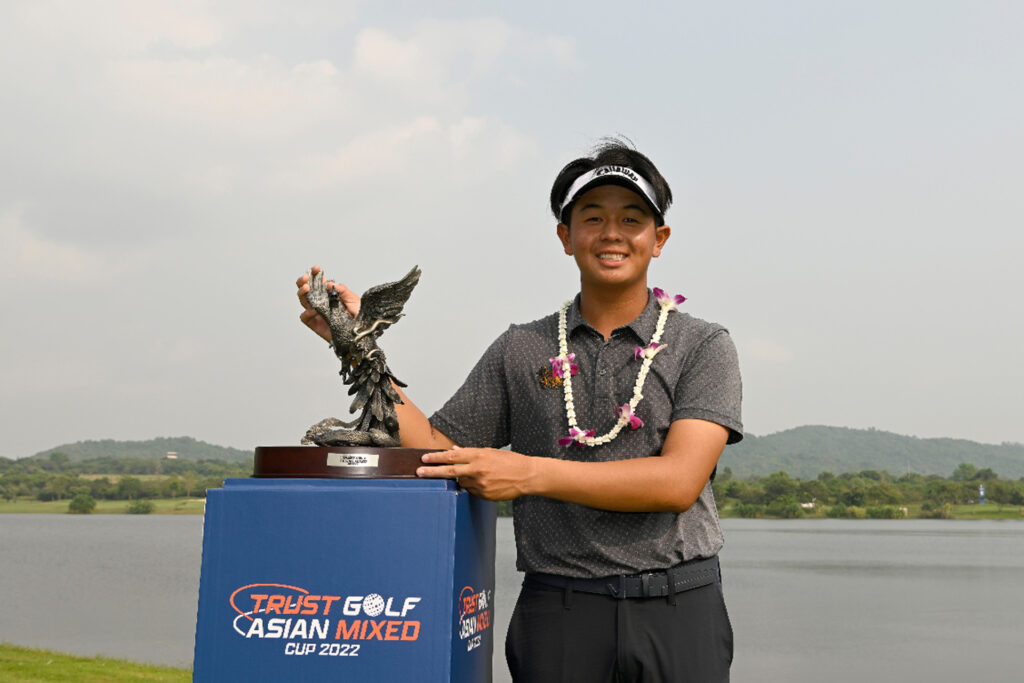 Thai amateur Ratchanon “TK” Chantananuwat fired a final round of 65 (-7) to secure a two-shot victory at the Trust Golf Asian Mixed Cup and become the youngest male player to win of the game’s major Tours.

The 15-year-old was impressive throughout his week at the Waterside Course at Siam Country Club recording rounds of 63, 70, 70 and 65 to finish at a total of 20-under-par.

Chantananuwat, who began the day at -13, started his round well with three birdies in the opening nine holes.

A dropped shot on the 10th was soon of no importance as the teenager rolled in four birdies in five holes before making another birdie on 18 to be sure of victory.

With the win, Chantananuwat bests the previous youngest winner mark which was held by Japan’s Ryo Ishikawa, who was 15 years and eight months when he won the Japan’s Tour 2007 Munsingwear Open KSB Cup.

And the previous best on the Asian Tour was Thailand’s Chinnarat Phadungil who claimed the 2005 Double A International Open when he was 17 years and five days.

The all-time record is held by Thailand’s Atthaya Thitikul who won the Ladies European Thailand Open on the LET in 2017 at the age of 14 years, four months and 19 days old.

“I am very excited, but I felt a lot of pressure. I have got to be honest, I got pretty lucky, I had hit two or three terrible drives.

“I saw that [Kim eagled 18] and was not surprised, he pulls off that stuff all the time. It put pressure on me, but I tried not to look at it too much. I definitely have a lot of people to thank.”

No plans to turn pro

But the Thai sensation has no plans to turn professional anytime soon and will complete his studies at the Shrewsbury International School Bangkok.

“This has been my plan all along. I enjoy going to college and learning everything. I have talked to a lot of players, and they have all said go to college.”

In second place was Korea’s Joohyung Kim after he fired the joint-best round of the day with a 64 (-8) that propelled him up the leaderboard.

The 19-year-old rolled in birdies on the third and fifth holes before blitzing the turn with four birdies on holes eight through to 11.

Another on 14 put the Korean in an excellent position before he dropped a shot on the 17th, but he didn’t rue it as he made an eagle on 18 to finish the tournament on 18-under-par.

American Paul Peterson and Korea’s Bio Kim finished in a tie for third place on 17-under, while American John Catlin was one shot further back on 16-under.

Four players finished in a share of sixth place including Chanokhan Angurasaranee, who was the best-place female in the Trust Golf Asian Mixed Cup.

Angurasaranee, who is known as April, produced rounds of 67, 70, 67 and 69 to finish on 15-under-par alongside Korea’s Taehee Lee, South African Ian Snyman and Thailand’s Phachara Khongwatmai.

“It was very tense the first couple of holes, I got really nervous, and it was still tense up until I got my first birdie, and then that made me relax and freed me up a lot so I could get in the zone.

“My driver has been incredibly great through the week, my irons were good today as well but I missed a couple of greens, but luckily my up and downs were good as well to save pars.

“My goal is to get in the top ten on Epson Tour and to try to get into the LPGA and seeing the other Thai girls do well gives me the motivation to go after it and makes me believe I can go there and do it too.”

In the 2022 Race to Costa del Sol, Thomson made the biggest move of the week going from 22nd up to sixth place and she now has 385.21 points in comparison to leader Lee-Anne Pace with 681.87.