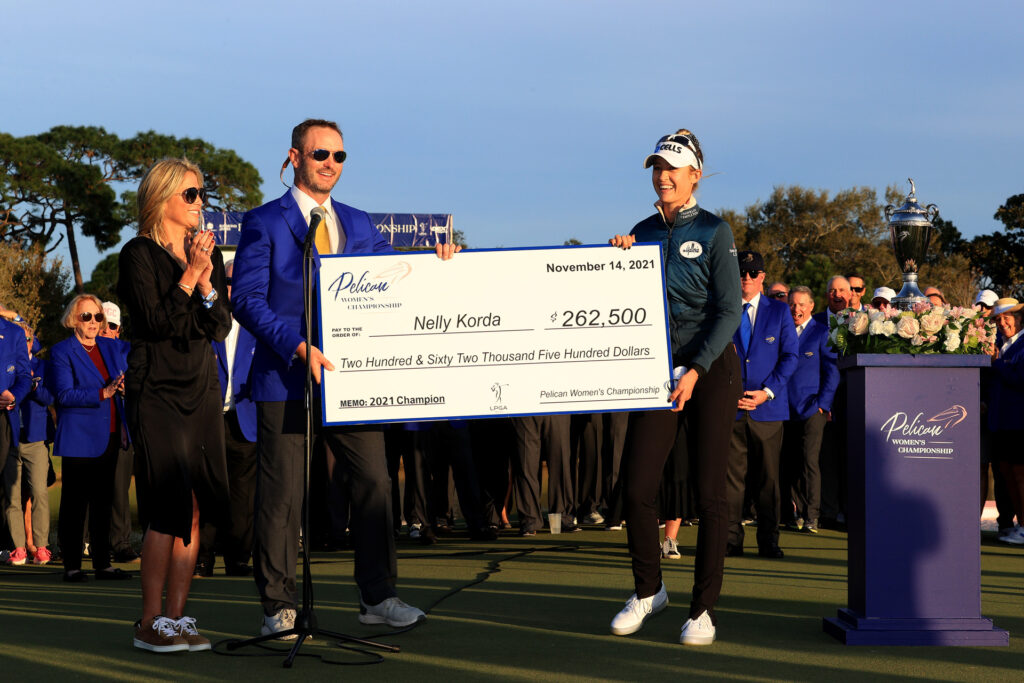 The 2022 LPGA Tour season is set to present yet another year of record-setting purses and playing opportunities. Thanks to the support of new and long-time partners, LPGA Tour Members will compete for $85.7 million in official purses in 2022, the largest total ever presented to the world’s best female golfers, across 34 official events.

“The stage is set for 2022 to be one of the most exciting years in the history of the LPGA Tour, with the addition of new events, the largest total purse ever, over 500 hours of broadcast television and a collective commitment to being the leading women’s professional sports property in the world.

“We have never had such a robust team of partners from around the globe who see both the commercial value in investing in the LPGA and the opportunity to utilize the partnerships to have a positive impact on their communities and on the world. As the home to the best female golfers in the world, we will continue to focus on offering a dynamic schedule that allows players to reach their peak performance in golf and in life and that provides the platform to inspire young girls and women around the globe to dream big.”

The 2022 season will open with three weeks in Florida, leading off with the Hilton Grand Vacations Tournament of Champions, moving to a new host venue at Lake Nona Golf and Country Club in Orlando. The Gainbridge LPGA will return to Boca Rio Golf Club in Boca Raton after a one-year stop at Lake Nona, and the Florida trio will culminate at the fourth playing of the LPGA Drive On Championship, with a date and venue to be announced in the coming weeks.

Following the usual early-season swing through Asia, with stops in Singapore and Thailand, the Tour will spend five weeks in the Western region of the United States. In early April, the golf world will celebrate Mission Hills Country Club and its 50-plus years of LPGA Tour history with The Chevron Championship, the first major of the golf season, with a new title sponsor. The LPGA announced in October that 2022 will mark the major’s final playing in Rancho Mirage, and the week promises to be an exciting celebration of Dinah Shore, Mission Hills and the famed jump into Poppie’s Pond.

After beginning with The Chevron Championship, the 2022 women’s major championship season will continue at the U.S. Women’s Open, which returns to Pine Needles Lodge and Golf Club in North Carolina, the venue for Cristie Kerr’s 2007 national championship title. The KPMG Women’s PGA Championship will head to Congressional Country Club in Maryland, a five-time men’s major venue that is set to welcome its first major women’s event.

A four-event European Swing will feature two major championships, starting with the Amundi Evian Championship, the Tour’s annual visit to the French Alps. The first week in August will bring the much-awaited AIG Women’s Open visit to Muirfield, marking the first time in its illustrious history that the famed links will host a major women’s championship.

The season will include two tournaments making their LPGA Tour debuts on the calendar. The JTBC Championship at Palos Verdes will be held at Palos Verdes Golf Club in late April, joining the previous week’s JTBC LA Open at Wilshire Country Club for a two-week tour through suburban Los Angeles. In September, the Tour will visit Kenwood Country Club for the Kroger Queen City Championship presented by P&G, marking a return to Cincinnati for the first time since 1989.

After a two-year absence due to the pandemic, the LPGA Tour will return to Canada in late August for the CP Women’s Open at Ottawa Hunt and Golf Club in Ontario. It will kick off a summer sprint across the United States, ending with the LPGA MEDIHEAL Championship being held for the first time at The Saticoy Club, located outside Los Angeles. The Tour will then return to Asia for its Fall Swing, making appearances in the People’s Republic of China, the Republic of Korea, Chinese Taipei and Japan, before ending the season at the CME Group Tour Championship in Naples in Florida.