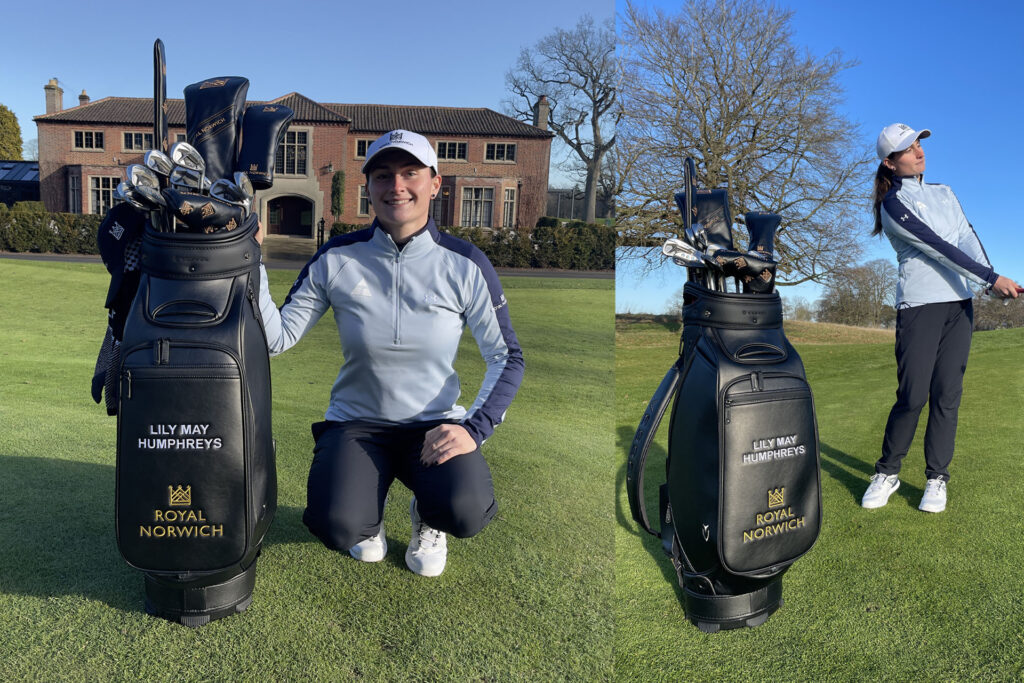 One of Britain’s most promising young golfers, Lily May Humphreys, has been announced as an ambassador for Royal Norwich, as she prepares for her first full season on the Ladies European Tour.

The partnership will see Lily May champion Royal Norwich’s progressive approach as a blueprint for modern golf clubs aiming to make the game more accessible for all.

Ahead of today’s announcement Women & Golf spoke with James Stanley, Chief Executive at Royal Norwich about the club’s forward-thinking mentality, he said:

“Our focus on how we build our membership going forward is through a women first principle. As we develop our golf strategy we will ensure it aligns with that ambition for women, for the family - from the junior that's six-years-old, to the eighty-year-old that plays. To be relevant for all parts of the family, or now as we call it, the 'tribe'. And Lily is both young and an exciting female talent. The integrity of what we're trying to deliver here was to ensure that we partner with someone who represented our brand in the right way, and Lily May is exactly that.

“It's about female talent, particularly, but also Lily May being associated with us and what we're trying to do. We're only at the start of our journey with regards to how we make our businesses relevant to all sections of our tribes. Lily May will help us do that and bring it further to the masses. Not just that, but also to the demographic around the younger age group, some of those that get lost to golf. And hopefully, she will help inspire the juniors through to the seniors that we have here at the Royal Norwich and those that aren't necessarily connected with us yet.”

More than just a logo on a cap

Stanley told Women & Golf that it wasn’t just about having a logo on a cap, that it was so much more than that. They hope that her association with Royal Norwich will be of benefit to the current and future members but also to those that want to get involved in golf and also inspiring future generations of golfers.

It’s no surprise that Lily May caught the attention of Royal Norwich. She had a prolific amateur career where she recorded domestic championship victories across each nation of the British Isles and played in the biennial 2018 Curtis Cup against the United States, the now 19-year-old went on to have a stellar first season as a professional on the Ladies European Tour Access Series in 2021, during which time she claimed a six shot victory on her debut event, topped the Order of Merit and was named ‘Rookie of the Year’.

Taking on the Ladies European Tour

Less than a decade after starting to play, Lily May is now ready for a shot at European golf’s top table and will be doing it with the support Royal Norwich, whose values align so closely with her own. Humphreys said:

“I am incredibly grateful to Royal Norwich for supporting me at the start of my first full season on the Ladies European Tour. To represent a club that continues to make the game more accessible for women and girls means a lot to me, so I am incredibly honoured to be working with them. I can’t wait to get involved in all the great initiatives they have running at the club to help bring more people into the sport.”

Speaking on the partnership itself, Stanley added:

“We have signed an initial three year deal. I use the word initial because we hope that the partnership will continue. We hope Lily May will be massively successful both on the Ladies European Tour and hopefully in the future across the pond and more globally on the LPGA. From our point of view, we are absolutely invested in her success, but also how that provides further success back to us as a business and a club.”

Royal Norwich is a signatory of The R&A’s Women in Golf Charter and promotes an equality driven facility through the implementation of many initiatives including gender-neutral tees, the introduction of grassroots programmes and through the support it offers to talented local players. The partnership with Lily May is further proof of the work it is doing to showcase golf as a more inclusive and welcoming sport for all.