Falling in love with Dumbarnie, maiden victories and a six-man play-off 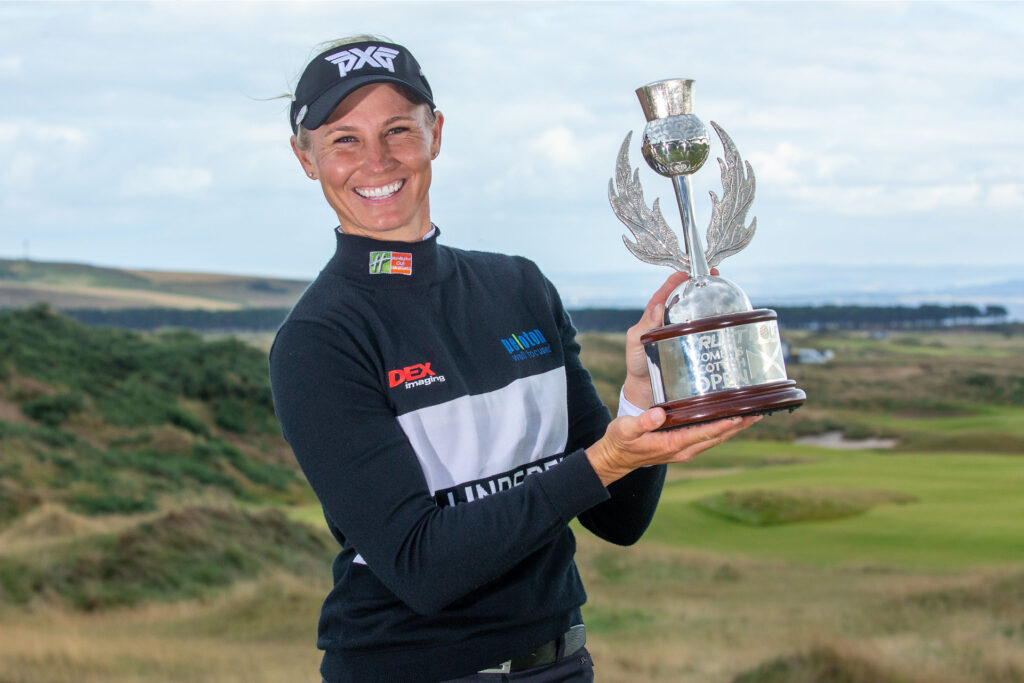 Dumbarnie Links is a true gem of a course and was showcased on the global stage by some outstanding performances. Here's our tour round-up:

It was always going to be a special week as the players from the Ladies European Tour (LET) and LPGA took to the Links at Dumbarnie to contest the Trust Golf Women’s Scottish Open. A new course which only opened in 2020 to rave reviews, there was much anticipation and excitement about how the players would tackle the course (well there certainly was at W&G HQ). And, thankfully, it didn’t disappoint.

It was a packed leaderboard heading into the final day with a good mix of LPGA and LET talent. A three-way tie at the top with Ryann O’Toole, Charley Hull and Ariya Jutanugarn at nine-under-par and just one-shot back, hot after the previous week’s win in the Aramco Team Series – Sotogrande, Ashleigh Buhai and Race to Costa del Sol leader Atthaya Thitikul.

Although there were low scoring rounds across the field, the day belonged to American Ryann O’Toole who secured her maiden LPGA victory. Unbelievably this was the 34-year-old’s 11th season on Tour, and 228th tournament, so the win had been a long time coming. She shot a bogey-free round of 64 (-8) to finish on -17 and three shots clear of Lydia Ko and Atthaya Thitikul.

O’Toole was clearly extremely emotional after her win which showed just how much it meant to her. She said:

“I can’t even describe it. I’ve been working my whole life for this and dreaming about it since I was a kid. I feel like it’s been ten years now, wondering when is it going to happen and I just feel like this year’s been very much kind of aligning and things are falling together.

“I tried to not look at the leaderboard. I tried to just trust in my caddie to guide me whether we needed to lay or get aggressive, stay patient or not.”

“I still feel like I’m in shock and the tears are going to come later when things die down. I’m excited and happy. The hours and grind and heartache this sport brings, the constant travel, for this moment, I hope it only happens again and again."

Thailand’s Thitikul kept in contention for most of the day but O’Toole was able to pull away with birdies on 15 and 17 to take a three-shot advantage down the final hole. Thitikul claimed her eighth top-ten finish of the season and extended her lead in the Race to Costa del Sol standings. She was pleased wit her performance, she said:

“I putted pretty well today and hit a pretty solid round, but it’s not enough for the win. I just know that I tried my best and I’m proud of myself already.

“I’m not a big fan of links, but I shot under-par every day, so for me it was about hitting the fairway, I like the fairways here.”

Ariya Jutanugarn and Charley Hull were not able to put pressure on O’Toole and finished in fourth and fifth respectively at -13 and -12, with Hull bogeying the last.

Two other rounds of note came from second place Lydia Ko and sixth place Ally Ewing. Ewing set the course record at 63 and Ko then followed to match it.

Ko commented on her score:

“I think I played really aggressive — well, I tried to stay aggressive, and that’s been the mindset feeding off last week.

“All in all, I played solid and I think all you can do is just trust your game and I feel like a lot of good things are there.”

“Certainly nine-under is not something that you put in your head because they are just so few and far between. It’s a special round but a lot of good confidence momentum for next week.

“I’m excited. My game is in a really good place and can’t wait to see Carnoustie tomorrow. I love my time here and playing in Scotland is fun. It’s always a treat to play links golf, and I can’t wait for next week.”

Esther Henseleit and Celine Boutier were among the five players locked on nine-under-par to finish tied for seventh place at Dumbarnie Links. Jeongeun Lee6, Yealimi Noh and Marina Alex also finished on -9, with Sarah Schmelzel, Anna Nordqvist and Ashleigh Buhai tied for 12th a further shot behind.

Further down the field, there were also outstanding performances from Whitney Hillier and Manon De Roey on day four, with the former hitting her best round of the season with a 65 (-7) to finish T15.

We now head into Major week and the AIG Women's Open where shooting a 63 is going to be a lot harder to come by. Carnoustie is waiting and we’re sure the players are ready for the challenge.

The 27-year-old rounded off an excellent week - which saw her card rounds of 66, 70 and 72 - to triumph with a final score of eight-under-par at Västerås Golf Club.

Eum, who finished T8 last week in Uppsala, got off to a great start when she rolled in back-to-back birdies on holes three and four to make the turn in 34.

The South Korean then opened the back nine with another birdie, before dropping two shots on the par-four 16th , but maintained the comfortable advantage of three shots heading into the last two holes.

“I had a good dream last night, and I found on the internet it means that everything is going to be great. So, when I woke up this morning, I thought I can do this. I think my nerves were definitely better than yesterday, although I hit the hazard on the 16th, I calmed myself down after that and just did what I had to do.”

“I think of this win as a new start and hopefully I can write a new story from now on. I will continue working with my coach Darryl Sando who I would like to thank so much. Since I’m here in Europe, I also now know how proud I am to be Korean and represent my country.”

England’s Lily May Humphreys carded a final round of 71 which included four birdies and three bogeys to finish in second place on five-under-par.

“I knew this was going to be a tough day for everyone and I tried to keep it as close to level-par as possible, so I’m happy with my result. I played pretty solid today, I holed a chip shot and a couple of good putts which kept me going through the middle of the round when it was rainy and windy.”

“My golf is getting better; it’s getting more to what I want. I’m happy with this tournament, it was showing a lot of good signs throughout the week and hopefully I’ll be able to bring this forward for the next couple of weeks.”

Back-to-back wins for Scotland on the European Tour

After Grant Forrest won last week at the Hero Open it was the turn of fellow Scot Calum Hill to take home the victory at the Cazoo Classic at The London Club in Kent. This was the first win on the European Tour for the 26-year-old, who had three wins on the Challenge Tour.

This win gives him a card on the European Tour and will mean that he moves into the top 100 in the world. He said on his victory:

"This is the start and hopefully I can keep pushing on from here and see where I can take it.

"I managed my emotions pretty well to stay in each shot and not get ahead of myself. I definitely felt the pressure but managed to keep control of it.”

Forrest beat France’s Alexander Levy by one shot at -16, with Richard Bland, Callum Shinkwin, Rasmus Hoejgaard and Jamie Donaldson all in a share for third at -14.

After some fantastic events across the UK and Ireland, the tour now moves to the Czech Republic and the D+D Real Czech Masters.

Kevin Kisner came through a six-man play-off to secure his fourth PGA Tour title at the Wyndham Championship. The 37-year-old American posted a four-under-par 66, with two birdies on the last three holes to finished at -15. Also at -15 after the final 18 holes were Branden Grace, Si Woo Kim, Kevin Na, Adam Scott and Roger Sloan.

Not quite the seven-man play-off for bronze at the Olympics but the tee box looked pretty cramped as they all played down the 18 as the first play-off hole.

All six players made par on the first extra play-off hole, with Scott missing a five-foot putt to win. So they headed back down 18 and it was Kisner, who had never won in any of his previous five play-offs, who sunk his birdie putt to win his first tournament since the 2019 WGC-Dell Technologies Match Play.

There was some disappointing news as Justin Rose three-putted the final hole for a bogey which means he dropped to 126 in the FedEx Cup and won’t feature in the Play-offs.

The tour now travels to New Jersey and The Northern Trust. Here's who made it into the FedEx Cup Play-offs.

A final round five-under-par was enough for Lilia Vu to win her third Symetra Tour title of the season and her fifth top-five finish. She finished at -12, two shots ahead of Ruixin Lu in the Four Winds Invitational.

Although the course proved tricky, Vu felt she played well, she said:

“I feel really good, definitely played pretty well. The course was super difficult today. Especially since the greens dried out pretty well. So, we had to really focus on hitting the front yardage or just short of the pin.

“I think because it’s Sunday, it’s the last day, there’s nothing to lose. There’s no pressure. You can just try and play your best golf. So, that’s what I just try to do.”

In addition to winning the 15th tournament of the Symetra Tour season, Vu also collects the 2021 Potawatomi Cup and $8,000 in bonus money.

The Four Winds Invitational was the third and final event of the series sponsored by Potawatomi.