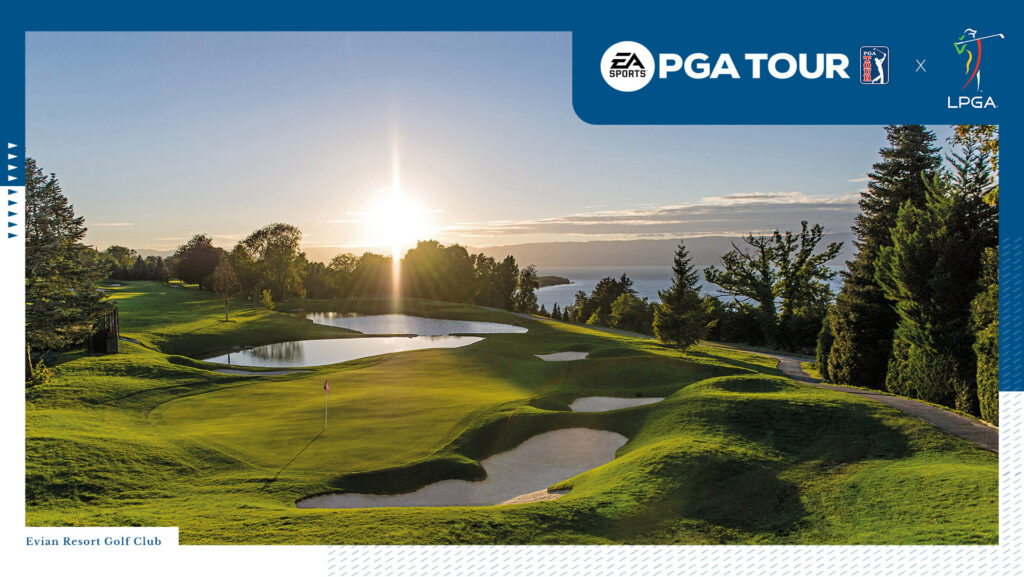 EA SPORTS PGA TOUR will go beyond character selection to highlight women’s golf and the LPGA with in-depth female representation across all modes.

Electronic Arts Inc. and the Ladies Professional Golf Association (LPGA) have announced the next phase of their long-term partnership with plans to bring the LPGA Tour, the longest-running women’s sports association; The Amundi Evian Championship, one of its five major championships; and more female golfers to EA SPORTS™ PGA TOUR™.

For the first time, the LPGA Tour will be experienced in high-fidelity on next-generation consoles and will feature a wide breadth of women’s golfing representation. In Spring 2022, all players will be able to tee-off as a female golfer at the truest representation of the Evian Resort Golf Club in Évian-les-Bains, France, thanks to the power of EA’s Frostbite™ game engine.

“We’re thrilled that the LPGA Tour is coming back to EA SPORTS PGA TOUR especially with the inclusion of a major global tournament like The Amundi Evian Championship. EA SPORTS has done a great job in continuing to expand female representation in the various modes throughout the game and featuring women’s golf in an authentic and modern way.”

To authentically represent the diversity found in the sport of golf and create a more welcoming community, the development team worked with a diverse group of golf professionals, including GOLFTV and Sky Sports broadcaster and former pro golfer Iona Stephen. Iona is a part of a larger Creative Council and has worked with the development team at EA for over a year on everything from design to audio, visuals, golf trends and community building. Iona is also joining the EA commentary team as the first female on-course commentator in-game, bringing her experienced insights from both playing professionally and working in golf broadcasting. Of the announcement she said:

“I’m incredibly excited that EA SPORTS PGA TOUR laid out a vision to represent female athletes and the LPGA in the game. My goal in helping EA is to give women the satisfaction of playing a quality golf game while seeing themselves in a variety of ways that go beyond a handful of female character models.”

Jin Young Ko excited to be part of the game

Jin Young Ko, the 2019 Amundi Evian Championship, will be included as one of the golfers and gave her thoughts on the continued partnership:

“I’m beyond excited to be included as one of the female golfers in EA SPORTS PGA TOUR. Women’s golf is growing so fast and having us included in this game is a great opportunity to reach fans all around the world. I can’t wait to see how it turns out – and I can’t wait to play the game!”

Ko joins a roster of LPGA Tour athletes coming to EA SPORTS PGA TOUR when it launches next year. Each of these athletes can be used to compete in multiple game modes.

You can play the Evian Resort Golf Club

The Amundi Evian Championship will be just one of the many additions to EA SPORTS PGA TOUR as a part of EA’s long-term partnership with the LPGA. Players will have the opportunity to play as several female athletes as well as create a female golfer of their own in the newly overhauled Create-A-Player feature. From having the chance to participate in a series of LPGA-themed challenges, amateur tournaments and events like the Amundi Evian Championship, EA SPORTS PGA TOUR is providing an in-depth women’s golf experience in 2022.

EA SPORTS PGA TOUR will serve as the first appearance of the Amundi Evian Championship in a videogame as it joins golf’s men’s major championships: the Masters Tournament, PGA Championship, U.S. Open and The Open. In addition to playing the major championships, golf fans can also live out a legendary career as they authentically compete at THE PLAYERS Championship and FedExCup Playoffs, while experiencing the unique atmosphere and venues of each tournament.

Find out more by following @EASPORTSPGATOUR on social media platforms.