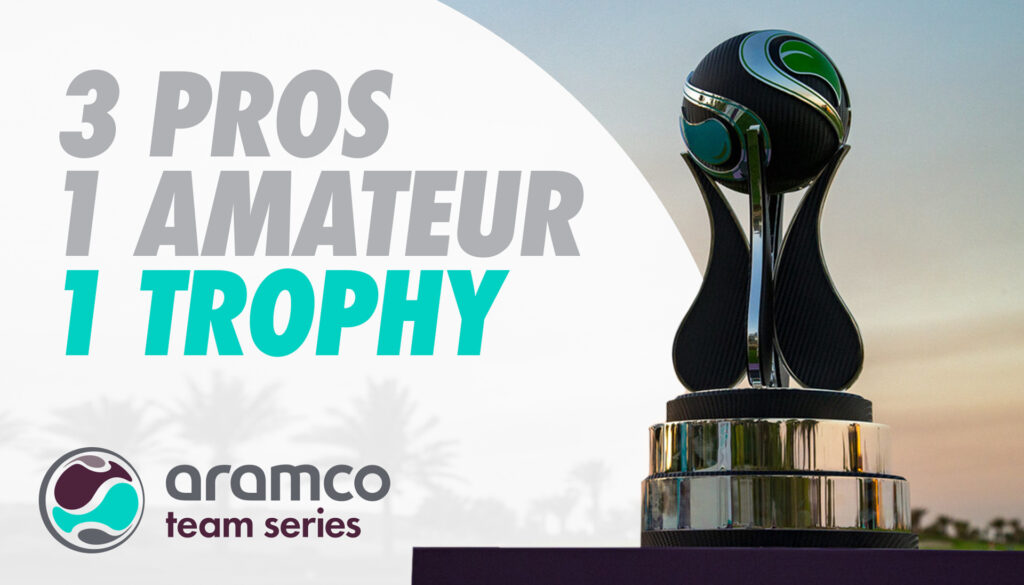 A new team event, the Aramco Team Series, is coming to the Ladies European Tour which will have a unique format where three professionals are paired with an amateur.

The three-day event will tee-off at Centurion Club, St Albans, on July 8 and offer amateur players the chance to play on the pro tour alongside some of the biggest names in women’s golf.

It is the first of five Aramco-sponsored events scheduled for 2021, taking place in the UK, Spain, the USA and Saudi Arabia. They include the Aramco Team Series – Sotogrande (August 5 to 7), Aramco Team Series - New York (October 14 to 16) and Aramco Team Series – Jeddah (November 10-12). The Jeddah event will take place just days after the Aramco Saudi Ladies International presented by Public Investment Fund, being held from November 4 to 7.

Each Aramco Team Series tournament will see 36 captains lead teams of four players, who together will compete to shoot the lowest combined score over three days of golf.

All teams will feature three LET players paired through a unique draft system, in which captains choose one player and are randomly assigned another. The fourth member of each team will be an amateur golfer – a position open to all golfers in the UK for the Aramco Team Series - London through the tournament’s world-first Team Up competition.

That means it could fall to an amateur golfer to hole an LET tournament-winning putt to secure prize money for the professional players, a featunique to world golf.

In addition to the team competition, professional players will compete for the lowest individual score over the weekend, for which there is a $200,000 prize up for grabs from the overall pot.

A star-studded line-up in London

Former ANA Inspiration champion Lexi Thompson, who at the age of 12 became the youngest golfer ever to compete in the US Women’s Open in 2010, said: “It is really exciting to have not only a brand-new format of event to look forward to, but to have another big event on the LET schedule in the UK. It’s a place I love to visit and play golf, so I can’t wait to get going in July.”

“To the LET, the Aramco Team Series – London and the subsequent team events are a massive moment of elevation for the women’s game, and to have a field as strong as we do is fantastic.

“As a Tour, we are always more than happy to do things a little differently – take risks, try new things and mix up the way we play and experience golf. That’s certainly what the Aramco Team Series – London promises to do.

“The action at Centurion will open an exciting new chapter in women’s golf and one we see as playing a massive role in the continued growth of the game.”

The format of the team events was first trialed in November 2020 at the Saudi Ladies Team International, which was won by Danish star Pedersen and her team of South Africa’s Casandra Hall, Michele Thomson of Scotland and amateur golfer, Matt Selby.

European Solheim Cup hero Georgia Hall played in that event and is excited about the format becoming a regular feature on the LET.

She said: “It’s a really great addition to the Tour that I think most of us can’t wait to get playing in. It’s a new format and it’s different – and will only be a force for good in women’s golf.

“Investment like this is fantastic to see and to be able to take the game to new venues around the world and inspire the next generation of young golfers is a really wonderful thing to be part of. Starting in London will, for me, make it extra special.”

A unique opportunity for amateur golfers

For amateurs, the Aramco Team Series - London will offer a once-in-a-lifetime opportunity to play in an official Tour event. At each Aramco Team Series event, one player will be recruited through a social media competition called Team Up.

Amateur golfers have the chance to prove their on-course credentials by uploading a video to social media using the hashtag #ATSTeamUp, showing they have what it takes to play in an actual LET event. For more information on Team Up, visit aramcoteamseries.com/en-us/team-up

“We are thrilled to be backing events that we believe have the potential to shake things up and truly elevate women’s golf internationally, and spur it in Saudi Arabia. When the concept was first introduced to us, we saw it as a natural fit for our investment into world sports and our continued support of women’s sport.

“It is our honour to be title sponsors of the Aramco Team Series – London, and the other three Ladies European Tour events we will support this year, and we look forward to being there every step of the way as women’s golf continues to grow and expand its reach throughout the world.”

“Centurion Club are looking forward to welcoming the Golf Saudi team and hosting another innovative event in the Aramco Team Series.”

The tournament will adhere to COVID-19 protocols, as well as local and government guidelines.