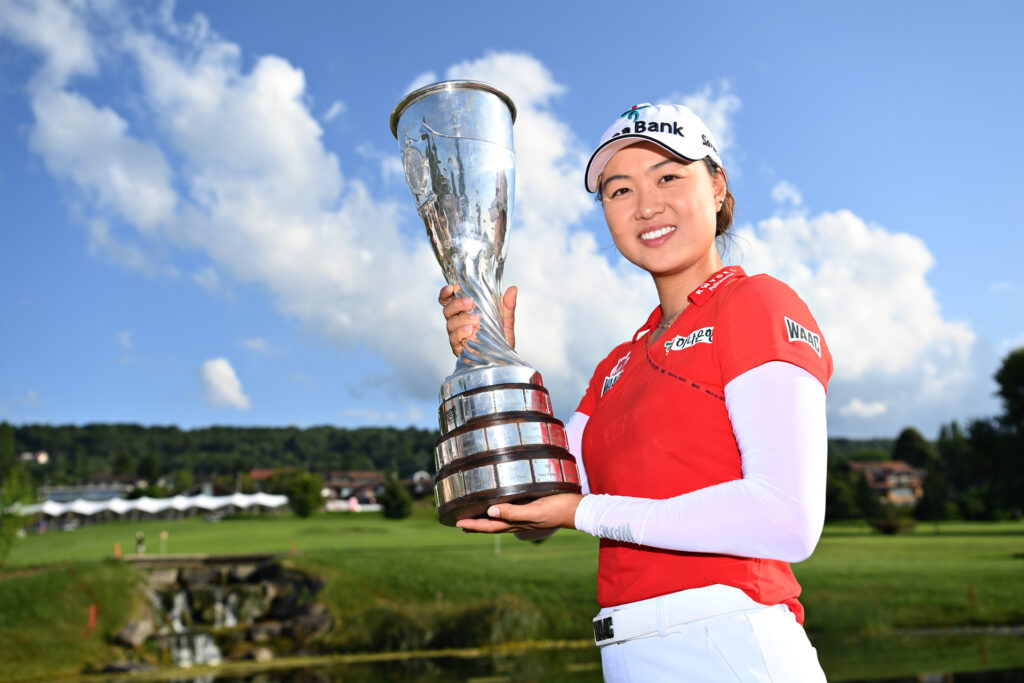 Minjee Lee wins in style to secure her first major victory at the Amundi Evian Championship, plus we round-up the rest of last week's tour news.

It was only just over a week ago that we were contemplating the chances of an Australian winner at The Open, one to follow in Greg Norman’s footsteps – 28 years since an Australian had lifted the Claret Jug. It turned out that we could not have been further from the mark as the highest-ranked Australian was Cameron Smith in T-33!

Fast forward a week and we’re celebrating an Australian major champion – we clearly had been looking in the wrong place! Minjee Lee overcame a seven-stroke deficit to win the 2021 Amundi Evian Championship, shooting a bogey-free 64 in Sunday’s final round and winning a one-hole play-off with 54-hole leader Jeongeun Lee6.

Ahead of the final round KPMG performance insights gave Jeongeun Lee6 an 84.5% probability of winning and she was the seventh player in the last 15 seasons to hold a 54-hole lead of five strokes or more in a women’s major championship. Each of the previous six players went on to win. So, with Lee’s chances just at 1.6% you could be forgiven for believing that the winner was likely to come from the final group of Lee6, Lydia Ko and Yealimi Noh.

The fact that it was Lee6’s to lose became very apparent after a birdie on the first was followed by bogeys on five of the next eight holes. The 25-year-old did show her strong mindset by coming back with four birdies on the back nine but a final round of 71 was only enough for a play-off.

The play-off belonged to the 25-year-old Australian who hit an approach shot that will go down in major history, a 6-iron from 190 yards that went to within eight feet for eagle. With mounting pressure, Lee6 was only about to put her approach in the creek in front of the green.

Round of the day had to go to Ireland’s Leona Maguire who shot a 10-under 61, joining Lee6 in tying Hyo-Joo Kim’s record-setting score for 18 holes at a major, male or female.

Whilst the LPGA moves to Ireland and the ISPS Handa World Invitational, Maguire will be on her way to Tokyo and the Olympics where she hopes to build on her experiences from Rio in 2016, she said:

“I was fortunate enough to play in Rio five years ago as an amateur. Going back will be a little bit different experience this time. Hopefully the few years of professional golf under my belt will help me this time. Never been to Asia before. Excited to go to Japan. Don't know what really to expect, but, yeah, representing your country at the Olympic Games is the biggest honour you can have. Really excited for that.”

Lilia Vu won her second Symetra Tour event of the season when she shot a three-under-par 68 to finish two shots clear at the Twin Bridges Championship at Pinehaven Country Club. She previously won the Garden City Charity Classic in May.

Afterwards she talked about changing her mindset, which helped her to go on and win, she said:

“It feels really good to come up on top this week. On the front nine I was really mad at myself and I saw my anger get the best of me. At the 9th tee-box I decided I was going to have fun. It all worked out and luckily I birdied 9 so that got me rolling.”

Welshman Stephen Dodd held off Miguel Angel Jimenez, Darren Clarke and Bernhard Langer to win the Senior Open and secure his first senior major title at Sunningdale. He shot a final round 68 to finish on -13 and one shot clear of Jimenez.

Dodd equalled the low round in the history of the Senior Open on Saturday with an eight-under-par 62 that gave him a two-shot lead heading into the final round.

The 55-year-old was only competing in only his second competitive event in the last eighteen months due to the pandemic. With the win he receives an exemption onto the PGA Tour Champions Tour and will be part of the field at the 150th Open Championship at St Andrews next year.

Nearly echoing the final round that played out at the Amundi Evian Championship. Spain’s Nacho Elvira nearly squandered a six-shot lead going into the final round of the Cazoo Open but was able to bounce back from a disappointing final round of 71 which included a bogey on the last to beat South African Justin Harding in the first play-off hole.

The 34-year-old’s victory comes at his 195th attempt and sees him finally win after three second place finishes, two of them coming via a play-off. After his victory, he said:

Finally, to finish our review of the week’s golf. Cameron Champ overcame the heat in Minneapolis to win his third PGA Tour title at the 3M Open. Carding a bogey-free round of 66, to finish two shots clear at -15 from Open championship contender Louis Oosthuizen, Charl Schwartzel and Jhonattan Vegas.

The focus now shifts to the men’s competition at the Olympics – after Bryson DeChambeau and Jon Rahm have had to pull out due to testing positive for coronavirus and some big names missing the event such as Dustin Johnson, it remains to be seen how well the competition will be received by the sporting world this week.