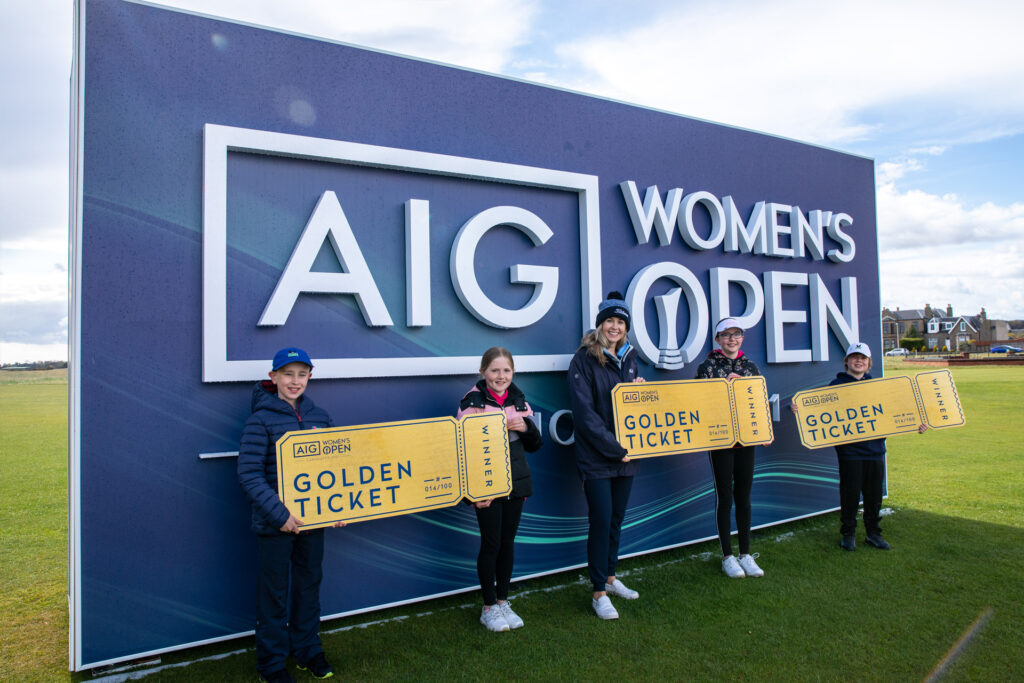 The R&A is celebrating 100 days to go, on May 11, until the AIG Women’s Open tees off at Carnoustie by offering 100 junior golfers a once in a lifetime golden ticket to the Championship.

The AIG Women’s Open aims to champion the changing face of golf and The R&A is working with golf clubs across Scotland to inspire the next generation of golf fans to attend the Championship.

Participating golf clubs will award a golden ticket to junior golfers who, in their own play, exhibit the values of the AIG Women’s Open including inclusivity, inspiring others to enjoy the sport and actively engaging with golf on and off the course.

Golden Ticket once in a lifetime experience

With their golden ticket in hand, junior golfers will be treated to a special masterclass on Monday August 16 when they will receive top tips from some of the world’s best players as well as enjoy an exclusive behind the scenes look at the Championship. They will then be welcomed back to Carnoustie to experience all of the action on the four Championship days.

Whilst junior golfers can be lucky winners of a golden ticket and the VIP experience, all children under the age of 16 will be admitted free of charge, when accompanied by a ticket holding adult, to the AIG Women’s Open. A youth ticket for those aged 16-24 can be purchased from £10. All tickets should be booked in advance via aigwomensopen.com.

“The AIG Women’s Open plays a pivotal role in inspiring future golfers and so we have created this campaign to specifically engage with young people and allow them to experience the excitement of the Championship.

“The golfers who compete in the AIG Women’s Open have an incredible level of skill, talent and athleticism and we hope that their inspiration and this opportunity will encourage golden ticket recipients to continue to develop their golf and enjoy its many benefits.”

This year Sophia Popov will return to Carnoustie as the AIG Women’s Open defending champion, after making her debut in the Championship at the famous Angus links in 2011. Her breakthrough victory at Royal Troon last year provided an inspirational tale of perseverance, hard work and belief for golfers at every level of the sport.

Popov commented on her win and inspiring the next generation of golfers:

“Winning the AIG Women’s Open was an incredibly special moment for me last year so to hear that it has inspired other golfers is quite humbling. I think that as professional athletes we are in a unique position to help promote golf by encouraging people to start playing.

“I really like that junior golfers will get an experience inside the ropes at the AIG Women’s Open this year and I hope that it motivates them to continue to pursue their dreams. Being the defending champion at a Major is certainly one of mine.”

To find out more about the golden ticket campaign and the AIG Women’s Open please visit aigwomensopen.com. The AIG Women’s Open will take place from 16-22 August 2021 at Carnoustie. The Championship will follow government guidance in relation to spectator attendance.

Adult tickets will start from £20 with children aged 16 years or under before the Championship admitted free of charge. Spectators aged 24 years or under will be entitled to purchase youth (16-24 years) tickets starting from £10. A £5 Mastercard discount is available per transaction. Buy your tickets here.