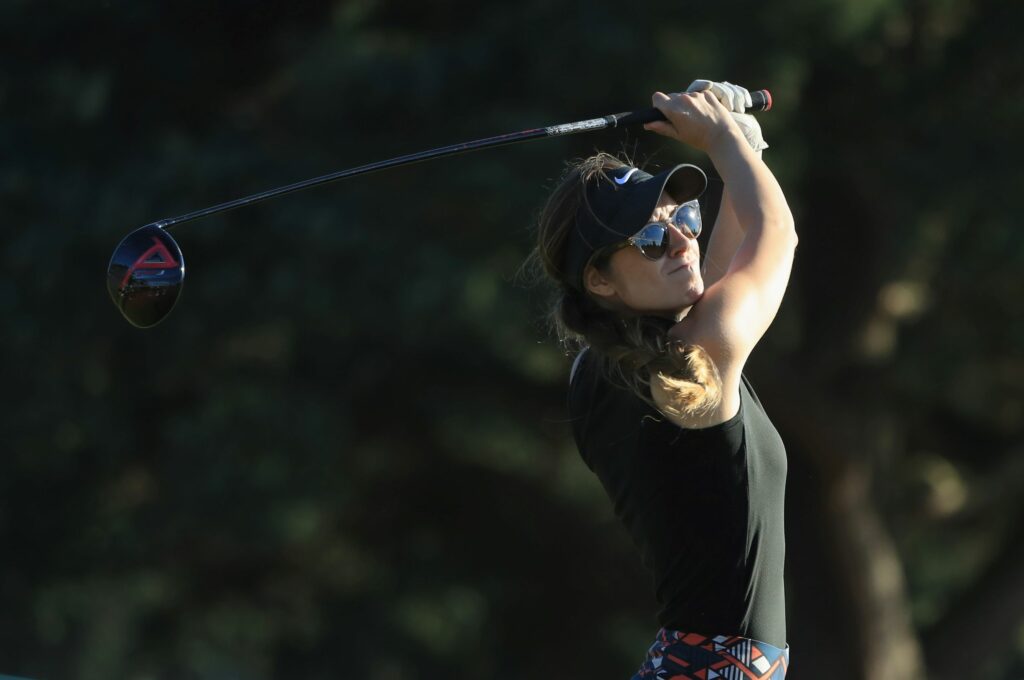 The Jazzy Golfer has spoken out after she was attacked with 'continuous sexist, misogynistic and derogatory abuse' on social media.

Jazzy posted a video on her social media where she shared a heartfelt account of the abuse she received after she commented that a post comparing angry golfers to women on their periods, was a bit offensive and really not that funny (I can't help but agree).

PGA Memes, the Instagram account that posted the image, then pinned Jazzy's comment to the top of their feed, prompting her to receive an outpouring of horrific messages attacking her for disagreeing.

The platform has deleted the image since Jazzy spoke out about the pain they caused her, but I've found it else where on the internet to give you an idea about what sparked the whole thing (see below).

"They pinned my comment and this invited a mass pile on of abuse, sustained personal, derogatory abuse, that is actually still going on right now."

Brave enough to share some of the messages she received, some included awful, patronising comments like 'someone must be on her period' and others that were far, far worse and too violent and horrible to repeat.

"I think it's really important to talk about how much abuse women get online, simply for expressing an opinion," continued to influencer, who has over 48,000 followers on her Instagram account that documents her journey through golf and highlights the fun side to the sport.

"The line between comedy and offence is moveable and varies between person to person, and if people want to disagree with me, that's fine. That's the joy of free speach."

"However, what is not fine is to spout violent, derogatory, sexist abuse at a woman."

After sharing some of the disgusting comments on her Instagram stories, within hours she had hundreds of replies from women saying that they had experienced the same.

"I was saddened, but not exactly surprised, to hear that so many other women had experienced similar either at their golfing work place, on the course or online.

"Many of the men doing this will have wives or daughters or mothers who they would hate to have to experience something like this. So then why do they think it's ok to do it to someone else?"

I think, as I'm absolutely sure you do too, that it is absolutely not acceptable to treat somebody else in this way.

I think Jazzy was exceptionally brave and right to speak out, and what she has addressed is exactly why golf still has such a bad reputation amongst some people and more importantly, why women are putt off giving it a go.

We're all trying so hard to get more women and girls playing golf, and this kind of awful behaviour is stopping our progress.

"Some people might see these messages as a joke, but it actually has real impact. I don't think anyone should be made to feel unwelcome in golf, or made to feel like their opinion doesn't matter simply because of their age, colour of their skin or whatever," she continued.

"I was shocked at the number of women who said they have stopped playing golf because of the way they have been treated on the golf course."

But, reassuringly, her emotional videos were met with an outpouring of support, from both men and women.

"I want to say thank you to the hundreds and thousands of people who wrote to me condemning those who sent the abuse. The positive comments I received far out weighed the negative," she said.

She described the amount of shares and likes the videos got as 'overwhelming'.

Indeed, amongst those who praised her for speaking out and shared the post were a number of LPGA and Ladies European Tour players including Cheyenne Woods and Meghan Maclaren.

Lets hope her brave stance will make others think twice about sharing such abuse in the future.

As Jazzy said, it's 2021, and it's really quite sad that these kinds of thoughts are still prevalent amongst male golfers.