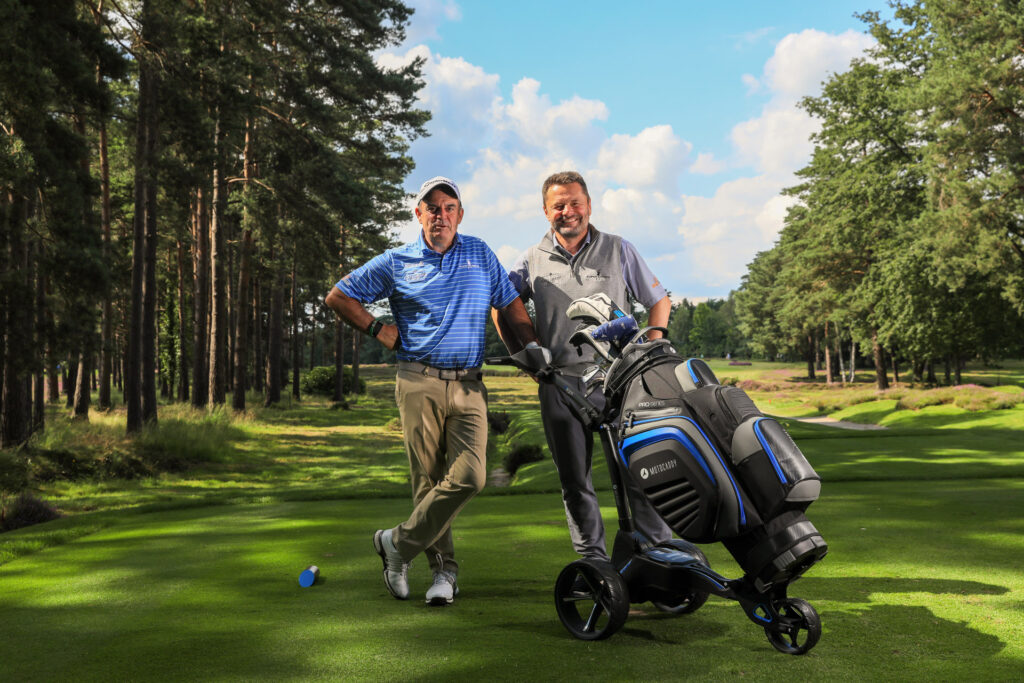 Motocaddy has been unveiled as the headline sponsor of a brand new six-part TV Series starring former Ryder Cup Captain Paul McGinley playing some of the world’s most spectacular golf holes to be broadcast in more than 500 million households worldwide over the next four years.

The first show in the Series, Golf’s Greatest Holes, will be screened on Sky Sports from next week and features Paul using the latest Motocaddy M5 GPS and M7 REMOTE electric trolleys, while co-presenter and keen golfer Chris Hollins carries the HydroFLEX bag during a quick-fire golf trip across Ireland and Northern Ireland. A preview of what’s to come featuring holes played at Old Head, Royal Belfast, Ardglass and Carne earlier this year can be seen here.

Each 30-minute show features up to six holes selected by Paul for their stunning views as well as the challenge that they present golfers of all abilities. Other courses set to appear in the first Series include Royal County Down, Ballyliffin, The K Club, Royal Portrush, Portmarnock, Portstewart, Adare Manor, Rosapenna and Lahinch.

Appealing to a global audience

Over twenty leading broadcast networks have already signed-up to screen the Series across 189 countries, including the USA, China, Japan and Australia, reaching more than 500 million households and 50 million digital viewers, plus significant online and social media audiences over the next four years.

The Series’ first show will be screened on Sky Sports Golf on Monday, October 11 at 19:30 BST, with the next five shows scheduled to be broadcast every two weeks.

“We see Golf’s Greatest Holes as the perfect platform for the Motocaddy brand to partner with as we continue to expand our reach across the golfing world. To have Paul and Chris using our latest products at some of the world’s most wonderful golfing destinations across Ireland is very special and we’re pleased to have helped them create a relaxed and enjoyable experience.”

McGinley, who famously sank the winning putt for Europe on his Ryder Cup debut in 2002 before securing victory as Captain at Gleneagles in 2014, said:

“I’d never used an electric trolley before this Series, but I was blown away by how easy the Motocaddy models were to use.

“I really enjoyed using the latest Motocaddy products on some of the world’s best golf courses during the making of the series and I hope it encourages people to get out and make their own journey around Golf’s Greatest Holes.”

Future destinations are set to include USA, the Caribbean, Australia and Europe and more information can be found on the show’s website www.golfsgreatestholes.com, where viewers can discover behind the scenes footage, enter competitions and suggest which holes the Series should include next.

“As an avid golfer playing off a seven handicap, I’m genuinely thrilled to have a globally-recognised golf brand like Motocaddy as the headline sponsor of our new Series. The brand’s products fit perfectly with the relaxed feel that we’ve tried to create and I couldn’t be happier with the first six shows from the island of Ireland. We hope that golfers enjoy watching it as much as Paul and I did making it.”

For more information on all Motocaddy products, including trolleys, bags, batteries and accessories, please visit www.motocaddy.com or follow @MotocaddyGolf on social media.